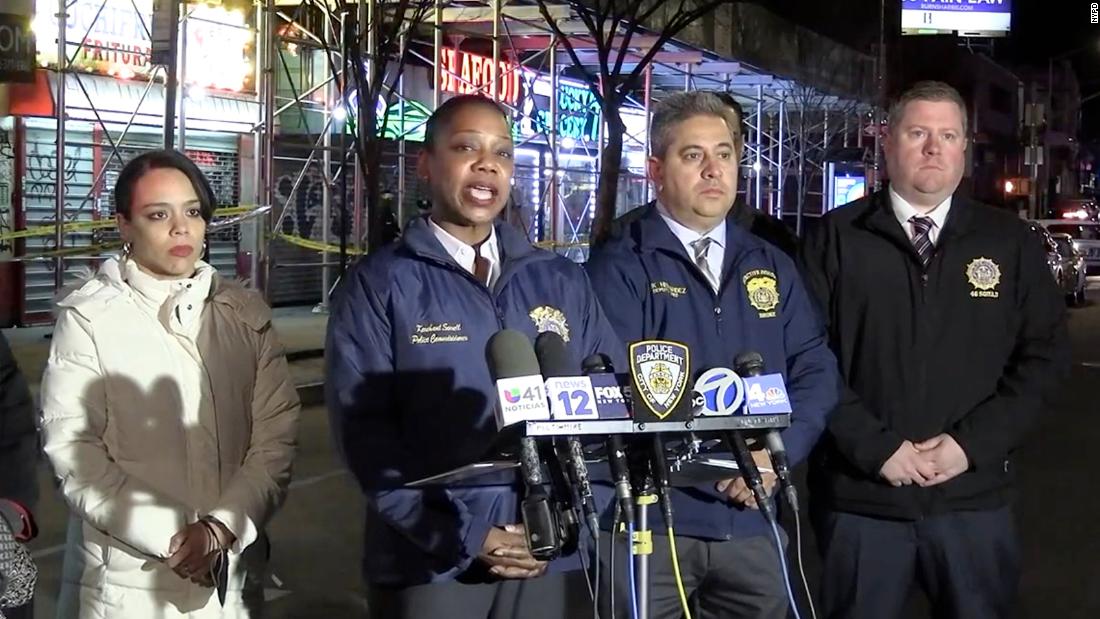 Soriano De-Perdomo was shot in the back while walking out of a store, officials said. “She was totally innocent, and an unintended victim of this scourge of gun violence we now see,” Department Chief of Detectives James Essig said at a Friday news conference.

Police arrested Rakell Hampton, 33, who police say is a member of the Bloods gang, and Donald Johnson, 20, who is not known by police to be a Bloods gang member, Friday morning. Both have been charged with murder by the NYPD.

CNN has reached out to The Legal Aid Society to see if it is representing Johnson and Hampton.

Before the shooting occurred around 7 p.m. ET, Johnson, Hampton and one other individual were allegedly arguing with three others, including a clothes vendor, Essig said.

The three other individuals fled the scene, police said, and Johnson and Hampton allegedly brandished firearms. Johnson then allegedly fired his gun five times and hit Soriano De-Perdomo, who was 30 to 40 feet away, Essig said.

Officers responding to the shooting administered first aid to Soriano De-Perdomo before she was taken to the hospital, police said earlier.

Police are still seeking to identify the third person who was with Johnson and Hampton, in addition to the identities of the three intended targets, Essig said.

NYPD Commissioner Keechant Sewell said earlier in the week she would “spare no resource” to bring those responsible for the woman’s death to justice.

“We’re here again to address another act of senseless violence on the streets of this city,” Sewell said at a news conference. “Mindless shootings with no thought or fear of the consequences. We know this incident tonight involved a dispute among several men, we do not yet know what that dispute was about, but we do know that an innocent bystander lost her life.”

The woman’s death comes as New York City is grappling with an increase in crime. As of Sunday, there had been 29,608 reports of major crimes like murder, rape, robbery and felony assault this year, according to an NYPD report. That’s a 44% increase from the 20,543 major crimes reported during the same period last year.
Last month, the NYPD deployed Neighborhood Safety Teams in response to rising gun violence. The teams are a revived version of NYPD’s controversial plainclothes units that were disbanded in 2020. The teams are focused on firearms and received additional training to prevent aggressive and abusive policing tactics that had plagued the prior units, NYPD officials said.

The police precinct that covers where Monday’s shooting happened has a Neighborhood Safety Team and additional resources will be deployed, Sewell said.