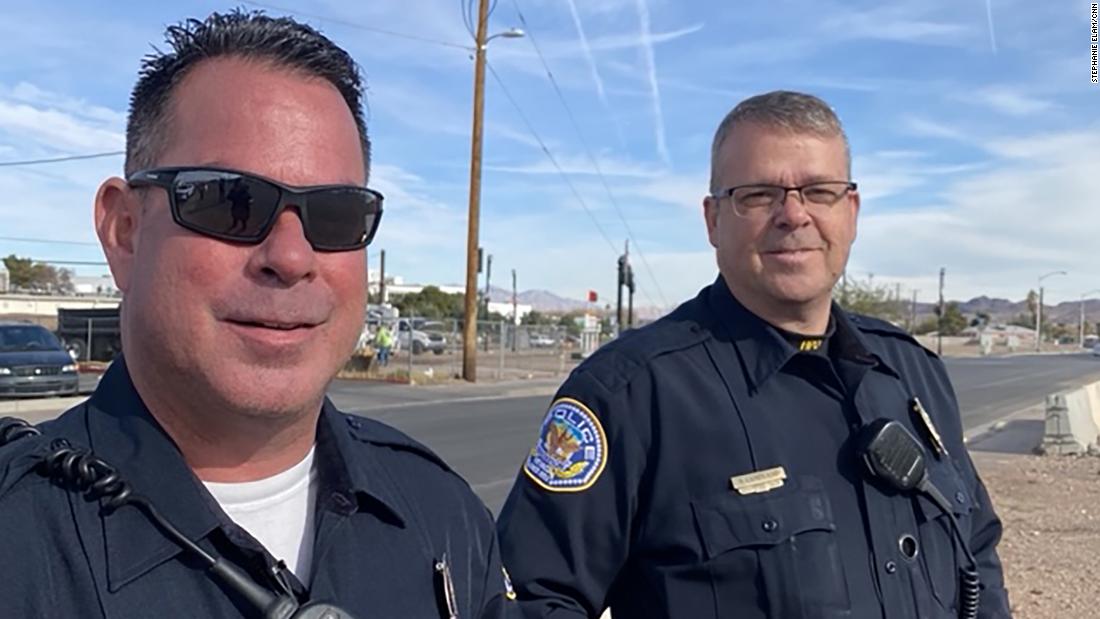 “When she came out, she had a makeshift sling on her arm, and she just looked very rundown. We just looked at each other. We can’t just walk away from this one with a good conscience,” said Sterling Candland, a police officer in Henderson, Nevada.

Candland and his partner, Carlos Chorens, knew they needed to intervene when they first encountered the feeble, homeless 75-year-old woman. For the next few months, they would work behind the scenes to ensure her safety and ultimately help reunite her with her son and the family members she didn’t know she had.

Candland, who has been on the force for 18 years, and Chorens, a 16-year veteran, have been partners for a couple of years. Their friendship, however, spans more than two decades — their bond apparent as they often finish each other’s sentences. They have plenty in common: They were born the same year, they joined the Army the same year and after the military they delivered pizzas for the same shop as a second job before joining the Henderson Police Department.

On this day, they were responding to a citizen complaint about homeless people camping on private property. But as officers who work in community relations, their duties are nuanced.

“We’re not there just to push them along any longer,” Chorens said. “We’re there to actually help them and we get them off the streets.”

Brazdovic didn’t ask for the officers’ help, but they stayed anyway, asking questions of her and a man she considered her caretaker. Meanwhile, they reached out to Rochelle Fletcher, an employee at the city’s Community Resource & Resiliency Center. They wondered if she could assist Brazdovic and find shelter for her and her companion since she refused to go anywhere without him.

“That was my job: To find out what was the root cause of her being out here on the street,” said Fletcher, who also took Brazdovic to a doctor. “She looked afraid. She said that she wanted help. She wanted to get off the street and so I told her I would help her.”

After a full day of searching, no space for the couple could be found for the night. But the officers promised they would return in the morning.

“The following day, Sterling and I went to McDonald’s and bought them breakfast,” Chorens said. “I came back at six o’clock, made contact with them and found out that they lost some of their property. Someone had stolen some of their suitcases.”

The officers spent another full day with Brazdovic and her companion before Fletcher was able to find a place to shelter them. It was March of 2021 and the officers were fearful that as frail as she was, Brazdovic would not survive the desert’s brutal temperature fluctuations, which could be frigid overnight and blazing during the day.

“She was shivering then, and it was 60 degrees that day,” Candland said. “She’s not going to make it much longer, we didn’t think. But once she got into placement, and she was able to actually get healthy meals and rehydration, she bounced back.”

As Brazdovic’s health improved, the officers learned more of her story every time they stopped by. They also encouraged her to trust the system to work for her.

“She was very, very happy to see us when we were visiting her, dropping off some care packages,” Chorens said.

She told them that she had lived and worked in Henderson for some 30 years before she retired.

“She ended up selling her place and she was going to do some traveling in a motor home. She ended up losing the motor home also, so that’s when she found herself out on the streets,” said Chorens, who with Candland believes Brazdovic experienced homelessness over a span of four years.

Behind the scenes, Candland and Chorens also worked with the city attorney to get three misdemeanor charges of aggressive panhandling against her dropped. She and her companion had amassed all the charges in about a week — just about two weeks before Candland and Chorens intervened, the officers said. Meanwhile, Fletcher continued her work on Brazdovic’s case, getting her new identification and looking into her finances.

“She knew exactly what she received every month. She was a retiree from Walmart,” Fletcher said. “She had finances that would keep her afloat. I think it was just (that) she was so trusting of just the wrong people that kind of put her in a position where she didn’t have as much control over her finances as she should have.”

There was a time Fletcher lost touch with Brazdovic for about a week. The officers and Fletcher didn’t give up. They kept looking for Brazdovic. By now, they knew someone was stealing from her.

“When she was supposed to come up with $600, somebody took advantage of her and took her money, so they ended up getting kicked out of the place that they were at,” said Chorens.

One day, by a stroke of luck, Fletcher ran to Walmart on her lunch break.

“I’m walking up, I see this couple … who appear to be homeless. And it’s her and my face lit up. I told her I’ve been looking for you and she was delighted to see me,” Fletcher said. “I called my officers at that moment and they rushed over.”

Brazdovic had returned to what she knew — Henderson and Walmart.

Candland and Sterling separated the man from Brazdovic, who reluctantly went with Fletcher. They were able to place her back where she had originally been staying, but this time by herself. They had a paper trail to show her.

“What was happening was explained to her — she got angry,” Chorens said. “If you’re living on the streets and you have social security, you become everyone’s best buddy when that check hits, and they’re not there for your best interest.”

Some three months after the officers found her, Brazdovic understood how she had ended up in her position.

“I like to help people, and sometimes by helping people they take advantage of it,” Brazdovic said.

Another time, Brazdovic took a walk from the assisted living facility where she was living and got lost. Luckily, she remembered she had Fletcher’s card in her purse. She walked into a store and asked to call her. The officers picked her up and took her back to the facility.

The search for family begins

Through all of this, Brazdovic maintained her sunny personality, said the officers who continued to visit her.

They learned she had a son and passed his name on to Fletcher.

“I knew she had not seen him in a while, and I was determined to make sure that she got to see him,” Fletcher said, noting that their long-term plan was to reunite Brazdovic with her family.

But first Fletcher had to find her next of kin. Brazdovic had lost touch with her son nearly 30 years ago. After some social media sleuthing, and thanks to the uncommon last name, Fletcher was able to find a relative.

“I got a message on Facebook messenger,” said Jennifer Michrina, the wife of Michael Michrina, Brazdovic’s son. “It was Rochelle.”

Not only did Brazdovic have a daughter-in-law she didn’t know about, but she is also a grandmother to two boys. The family lives in Hammond, Louisiana.

“He said, ‘I’m moving in with my dad because you’re never home,'” Brazdovic remembered her teenaged son telling her.

Then, when he was 18, Michael joined the Army and was stationed in Colorado. He heard his mother had moved to Las Vegas, but he didn’t have her phone number or address.

After serving his country, he stayed in Colorado and became a plumber. A year after Hurricane Katrina ravaged Louisiana, where she was born and bred, Jennifer decided she wanted something different and moved to Colorado, where the couple met. In 2012, the Michrinas moved to Louisiana, about an hour away from New Orleans.

Michael was receptive to reconnecting, but the revelation of how his mother had been living came as a shock. Fletcher set up a zoom call for the family — a surprise for Brazdovic.

“We shut the door. We let them, you know, have their moment with each other and she was excited,” Fletcher said, adding that the family said they would come visit. “But all along, we were planning to actually reunite her with them.”

For Michael, who couldn’t imagine living on the street, the first time speaking with his mother after so many years was “strange.”

“It was kind of interesting not knowing what had happened to my mom for 29 years, but it was good,” Michael said, adding that they let the past go and decided to focus on a fresh start. He said his heart opened back up immediately. “Now that she’s back, I can see what I was missing.”

Brazdovic was initially hesitant about leaving her beloved Nevada, but soon everyone agreed she should be with her family in Louisiana.

“It was unbelievable that things got put together so quickly to get her off the street, out of the homeless shelter and to us,” Jennifer said.

When she left Las Vegas in August, Brazdovic got a special airport escort.

“We walked her right down to the gate,” Candland said with a smile. “That was fun, too. We were happy to do that.”

The two officers posed for pictures in the airport’s police substation with Brazdovic, who was wearing a red track suit and a hat, smiling brightly.

“I thank God for them,” Brazdovic said of the officers. She hugged and thanked them both before boarding the flight. “This is the first time I ever flew in an airplane. I was so excited!”

In Louisiana, all four of the Michrinas were at the airport waiting for Brazdovic.

“She came walking up with a big smile,” Jennifer said.

Now more than a year after Chorens and Candland found Brazdovic, she’s safe and surrounded by love with no desire to ever return to Nevada.

“I got to have a family. That’s the best part! I love it,” Brazdovic said, adding that she likes to play basketball with her eldest grandson, Christopher, and taking bike rides with the youngest, Jeremy.

Michael acknowledged their reunion might not have happened if it wasn’t for the officers and Fletcher.

“God put them in her life just to take care of her,” Michael said, taking a breath as he teared up. “I guess they reaffirmed that there’s still good people out there.”

Fletcher, who often works with the officers, said the men have a passion for helping people.

It is an outcome Chorens and Candland hope to duplicate.

“It’s incredible. It makes you feel like you accomplished, and you helped somebody out,” Chorens said, emotion thick in his throat.