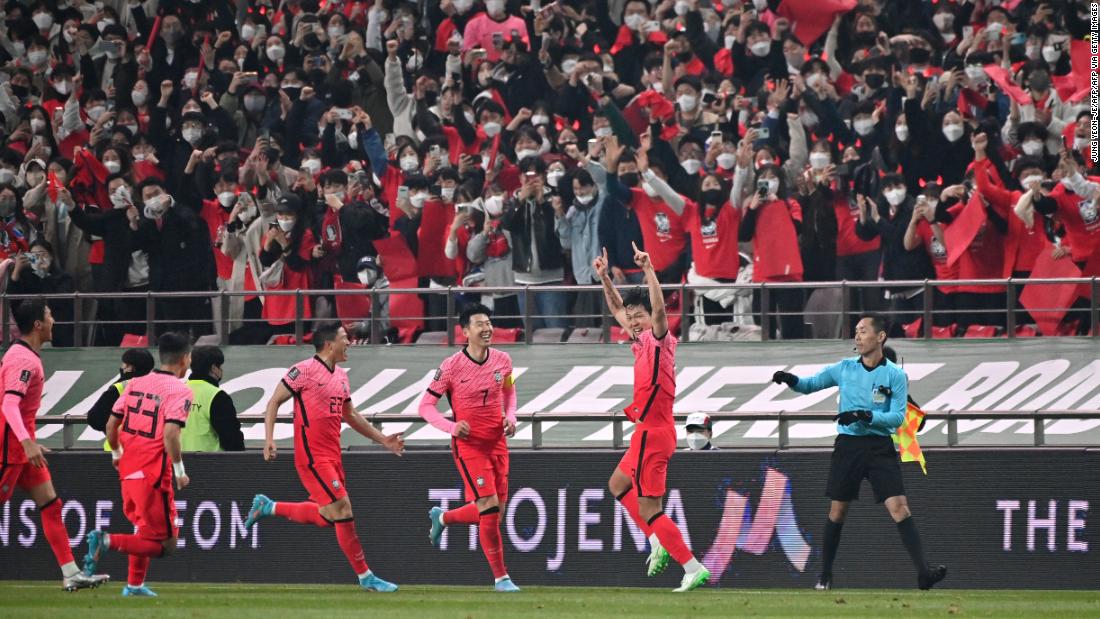 The men’s national team had gone more than 11 years without beating Iran but that streak ended on Thursday when it won 2-0 to move top of its World Cup qualifying group.

And the moment was witnessed by 64,375 fans at the Seoul World Cup Stadium, the most spectators welcomed at a sporting event in South Korea since the pandemic started.

South Korean captain Son Heung-min and defender Kim Young-gwon each slotted home and celebrated their goals in front of the fans who were all strictly wearing masks.

“I haven’t seen a crowd of 60,000 people recently, and preparations for the game were festive, so I felt the atmosphere was hyped up even at the stadium gate,” South Korean fan Won Jong-in told CNN Sport. “Of course, the game was good, but I think it’s fair to say that fans were feeling the vibe. It was inspiring to see lit Red Devils headbands filling the stands!

“It was a really good game. I don’t remember the last time I smiled and jumped, watching national team’s games recently. It feels as if I’ve been to a festival.”

In a post-match interview aired on TV, Son said he had missed laughing and enjoying the game with the fans.

“So many fans came [to the game] at a late hour on a weekday, helping us to play a good game,” Son said, thanking the spectators for filling the stands.

Spectators held up colored cards to spell “We missed you” before kickoff — something prepared by the Korea Football Association (KFA) to mark the return of a large crowd.

KFA said they chose the statement to express the emotions of both the fans and players after the pandemic had forced a cap on the number of spectators able to attend matches.

When Covid-19 first struck the country in 2020, South Korea had banned spectators entirely from sporting events.

The K-League was among a handful of football leagues that played behind closed doors after the world game was largely shut down.

The country had managed to keep its total Covid-19 cases relatively low until the highly transmittable Omicron became the dominant variant in January 2022.

As the variant spread fast, health authorities decided to focus on minimizing critical cases and deaths instead of dedicating its resources to curbing the number of total infections.

The country’s infection total since the pandemic began surpassed 10 million on Tuesday, meaning roughly one out of every five South Koreans have now been infected at some stage of the pandemic.

But the country has stopped using vaccines passes, which were required to enter public facilities including sporting events, and will scrap the seven-day mandatory quarantine for fully vaccinated international travelers starting April 1.

As the measures eased, health authorities allowed up to 299 people at sporting events but added that related ministries could grant permission for gatherings of 300 and more.

On Thursday, 64,375 fans had their temperatures checked upon entry and sat in the stands with their masks on. Vaccine passes and physical distancing were not imposed, however.

The KFA played pre-recorded voices of the fans during the game, as chanting is still banned to prevent further spreading of Covid-19.

Supporter Won told CNN that he could notice the lack of chanting as the biggest difference between games before the pandemic and now.

“In terms of football games, I’d have to say chanting … I hope that Covid-19 would settle soon so that supporting culture such as chanting would be back.”

Despite South Korea seeing its deadliest day of the pandemic on Wednesday, with 470 deaths reported in a 24-hour period, Thursday’s match was sold out.

Seoul World Cup Stadium, the biggest football stadium in the country, has only been sold out 10 times in history, including Thursday’s record, according to the KFA.

Securing a ticket was extremely competitive. The ticketing website struggled to cope and was down for 42 minutes as over 230,000 people simultaneously tried to access it.

“Considering the traffic figures of previous sold-out A matches, we had prepared a server sufficient for 120,000 people to simultaneously access this time,” the KFA said in a statement, apologizing for the inconvenience it caused.

But those who managed to get tickets enjoyed a special night.

A few minutes before the final whistle, fans turned their phone flashlights on to celebrate ending the winless streak against Iran.

“Last night, I got to feel the importance of the fans once again… I really missed it. Thank you so much. Thank you for making it a happy night!!” Son wrote on his Instagram Friday.

While fans at the game enjoyed being back at the stadium with the players and crowd, some expressed concerns online.

South Korea will travel to the UAE for its final Qatar World Cup qualifier on March 29, though the squad has already secured its passage to the World Cup in Qatar, set for later this year.