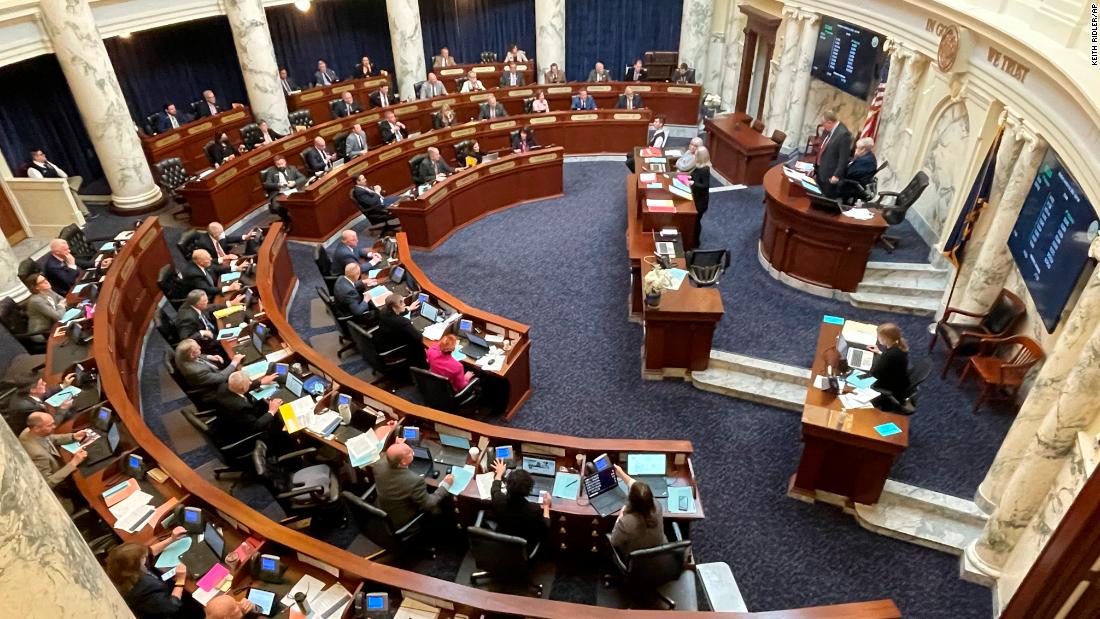 Several Republican-led states advanced anti-abortion restrictions this week, including bills that were modeled after a controversial Texas law which bars most abortions after six-weeks and allows private citizens to bring civil suits against anyone who assists a pregnant person seeking an abortion.

Meanwhile, Democrats in some blue states this week reinforced protections for abortion and made it easier for their residents to obtain an abortion.

Idaho became the first state to adopt a similar law to the Texas statute.

The Idaho law bans abortions once embryonic or fetal cardiac activity has been detected, and allows for exceptions for medical emergencies and cases of rape or incest if reported to law enforcement.

It also allows family members of the fetus to take legal action against the abortion provider or medical professional to seek a minimum of $20,000 in damages. The law does not allow a person who impregnated the woman by rape or incest to bring a civil lawsuit, but does not bar the family of the person from doing so.

Idaho Gov. Brad Little, a Republican, signed Senate Bill 1309 on Wednesday, despite his reservations about how the law will be enforced, including the “novel civil enforcement mechanism” that he said he fears “will in short order be proven both unconstitutional and unwise.”

The civil enforcement of the law goes into effect 30 days from the bill’s signing, and criminal penalties for health care professionals who violate the law will not go into effect until a circuit court upholds an abortion ban law that uses fetal cardiac activity as a measure.

Once the ban is in effect, if the situation proves to be like Texas, women in Idaho seeking abortions may have to travel out of state to obtain an abortion.

South Dakota’s Republican Gov. Kristi Noem on Wednesday signed a law that will further restrict access to medication abortions in the state, making it one of hardest places in the country to get abortion drugs.

The measure, however, will not take effect immediately due to litigation.

Noem proposed the policy to counter the Biden administration’s efforts to make the drugs used in a medication abortion more accessible during the Covid-19 pandemic, before finally the FDA lifted the requirement the drugs be dispensed in-person in December.

The South Dakota law would require pregnant women to make at least three in-person trips to a licensed abortion facility to receive the two drugs used in a medication abortion, and would bar them from receiving the pills in the mail. Typically, women are given both drugs in the same visit to their doctor or a clinic.

House Bill 1318 essentially codified a state Department of Health rule, also drafted at Noem’s direction, that was approved in early January, but blocked by a federal judge last month from being enforced. Noem’s administration is appealing the injunction.

The law would go into effect when there is no longer an injunction blocking enforcement and no further appeal is pending or can be made.

Arizona legislature approves ban on most abortions after 15 weeks

Arizona’s GOP-majority legislature on Thursday approved a bill that would ban most abortions after 15 weeks of pregnancy, sending it to the desk of Republican Gov. Doug Ducey.

The Arizona law, which is similar to the Mississippi 15-week ban currently before the Supreme Court, allows exceptions for medical emergencies but not for cases of rape and incest.

In the case of a medical emergency, physicians would also be required to file a report with the Arizona Department of Health Services if an abortion is performed after 15 weeks.

Physicians who knowingly violate the new statute would face felony charges or other punishments such as having their license to practice medicine in the state suspended or revoked.

The Arizona bill, Senate Bill 1164, awaits action from Ducey, who has previously advocated for anti-abortion restrictions.

Oklahoma’ state House on Tuesday passed a bill also fashioned after the Texas law, but which would ban most abortions at any point in a pregnancy.

Similar to the Texas law, Oklahoma’s bill would allow virtually any private individual to sue abortion providers believed to have violated the law, or any person that “aids or abets the performance or inducement of an abortion” or even simply “intends to engage in the conduct described by this act.”

Under the bill, private citizens would not be allowed to sue the person who had an abortion or is seeking abortions services.

Unlike Texas, however, Oklahoma’s proposal would allow exceptions for abortion in cases of rape and incest if reported to law enforcement.

The Oklahoma bill, House Bill 4327, is now being considered by the Republican-controlled state Senate.

Senate Bill 245 bans health care service plans and insurers from imposing a co-pay, deductible or other methods of cost-sharing for “all abortion and abortion-related services, including preabortion and followup services.”

Under the law, providers won’t be allowed to impose utilization management or review for coverage of outpatient abortion services.

Those with high deductible health plans will have to meet their deductible before the cost-sharing prohibition applies.

The law requires health care service plans issued or renewed after January 1, 2023, to comply with these new rules.

Colorado Democrats on Wednesday gave final approval to a bill that codifies the right to an abortion in the state as the Supreme Court decision looms that could overturn court precedent on abortion rights.

“A pregnant individual has a fundamental right to continue a pregnancy and give birth or to have an abortion and to make decisions about how to exercise that right,” the bill says, while also declaring that access to abortion and reproductive health care is “currently under attack across the nation.”

The bill, House Bill 1279, passed the Democratic majority state House and Senate both on party-line votes.

West Virginia’s Republican Gov. Jim Justice on Monday signed a bill that would ban abortion if a pregnant person is seeking the procedure because the fetus has been diagnosed with or presumed to have a disability.

The bill goes into effect in June and provides exceptions in medical emergencies or if the fetus is “nonmedically viable.”