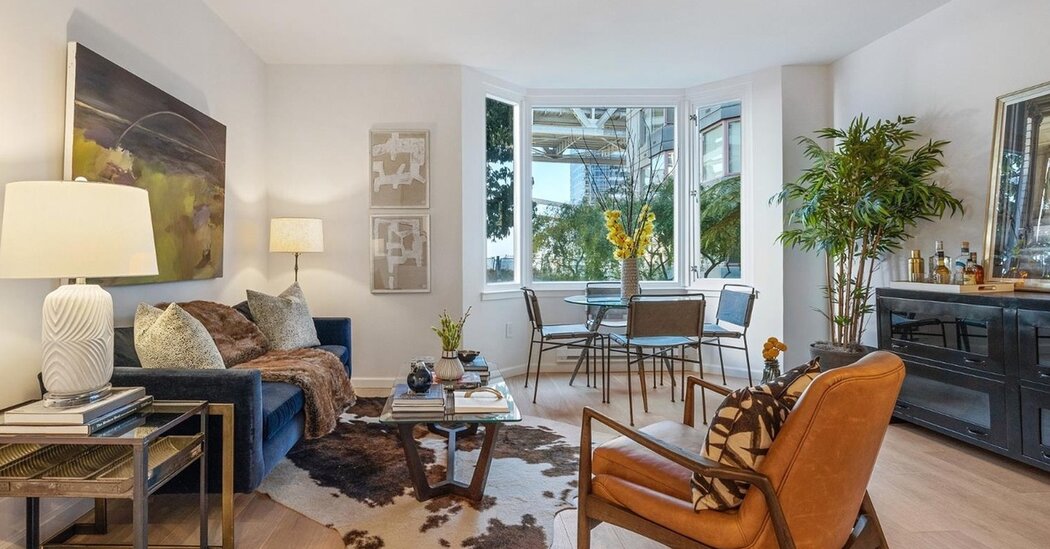 A 1907 Edwardian house with four bedrooms and two bathrooms, on a 0.1-acre lot

This property is less than half a mile from the original California Governor’s Mansion, an Italianate house built in the late 1870s. It is less than two miles from the State Capitol and a short walk from downtown Sacramento. Like many houses in this part of the city, it dates to the early 20th century and retains its original facade.

Nearby amenities include a fine arts bookstore, an independent coffee shop and a community garden; more restaurants and bars are clustered along I Street, a few blocks away. Sutter’s Landing Park, which has a beach on the American River, is five minutes away by car.

Indoors: The front door is set in a raised, covered porch that offers views of the street and has enough space for a bench. It opens into a foyer with refinished oak floors. To the left is a living-and-dining room anchored by a brick fireplace and lighted by matching chandeliers.

Directly across the foyer, in what was once likely a formal dining room, is another sitting area with a bay of windows and a built-in cabinet with arched glass doors. Beyond is the kitchen, which has penny-tile floors and a built-in breakfast table.

Off the kitchen is a guest room with a deep closet; next to it is a bathroom with a pedestal sink and more penny-tile floors. This part of the house also has access to the backyard and the basement.

From the foyer, carpeted stairs rise to the second floor. To the right of the landing are two guest rooms, each large enough to comfortably hold a queen-size bed. Opposite are the primary bedroom and a full bathroom, off the hall, which holds a claw-foot soaking tub and a washer and dryer. An enclosed sleeping porch connected to the bathroom overlooks the neighborhood.

Outdoor space: An exterior staircase off the kitchen leads to a patio with a planter box, surrounded by a wood fence. Nearby are several fruit-bearing trees.

A two-bedroom, two-bathroom condominium in a 1991 building with 288 units

Rincon Hill, a formerly industrial area, was transformed by a rezoning in the late 1980s that started a residential building boom. This condominium was among the first buildings to go up, a few blocks from the Embarcadero along the waterfront.

It is less than a mile from Oracle Park, home to the San Francisco Giants baseball team, and about the same distance from the offices of Google and Salesforce. The Ferry Building, where vendors sell produce, specialty foods and coffee, is a 15-minute walk. Ferries regularly depart from a nearby plaza for Sausalito, Alameda and other destinations across the bay.

Indoors: This unit was recently updated with wide-plank floors that run from the front door to the far side of the open living area. The apartment is at the back corner of the fourth floor, insulating it from traffic noise.

The kitchen, which is close to the front door, has new appliances, including a washer and dryer hidden behind slatted doors. A breakfast bar separates it from a sitting area big enough for a sofa and a dining table. Three tall windows face the mature trees growing in one of the building’s courtyards and, in the distance, San Francisco Bay.

A short corridor connects the living area to the two bedrooms. The primary suite has a wall of built-in storage finished in glossy white lacquer, and an attached bathroom with a combination tub and shower. At the other end of the hallway is a guest room with two large courtyard-facing windows; big enough to hold a double bed and a desk, this room could serve as a home office. A second full bathroom is off the hallway, with a stall shower and a new white vanity.

Outdoor space: The building has a full gym; a racquetball court; a heated swimming pool with a separate spa; and two gardens, each with a barbecue for use by residents. The lobby is attended 24 hours a day. This unit comes with one parking spot; additional storage space is also available.

A 1972 ranch house with four bedrooms and two bathrooms, on a 0.2-acre lot

This house is in a family-friendly neighborhood with well-ranked public schools and a nearby park with a children’s playground. It is less than 10 minutes from the main campus of the University of California, Davis, which has more than 30,000 undergraduate students and is the city’s largest employer.

In recent years, Davis has become increasingly popular with buyers looking for single-family homes priced under $1 million. It is within driving distance of several larger Northern California cities: Sacramento is less than a half-hour drive; San Francisco is about 90 minutes away.

Indoors: From the sidewalk, a paved path leads to this home’s covered entry. Two blue doors open into a foyer with gray-tone wood floors that continue into a living-and-dining area.

Beyond is an updated kitchen with granite counters, stainless-steel appliances and a breakfast bar that seats three. On the other side of the breakfast bar is a family room with a fireplace, built-in bookshelves and skylights with built-in blinds. Sliding-glass doors open to a patio in back of the house.

Off the living room is a hallway that leads to the four bedrooms. At one end of the hall is the primary suite: The bedroom has carpeted floors and sliding-glass doors that face the hot tub in the backyard; the bathroom has a shower with a glass door.

Next door is a guest room that the seller has converted into a walk-in closet, with custom shelves and a center island for storage. Across the hall are two more guest rooms of roughly equal size: One has built-in storage; the other, currently used as a home office, is big enough to hold two desks. They share a full bathroom off the hallway.

Outdoor space: A covered patio behind the house is big enough for a dining table and a sitting area. On one side of the patio is a stone fountain; on the other is a hot tub. Another sitting area is around the corner, along the side of the house. The attached garage holds two cars.