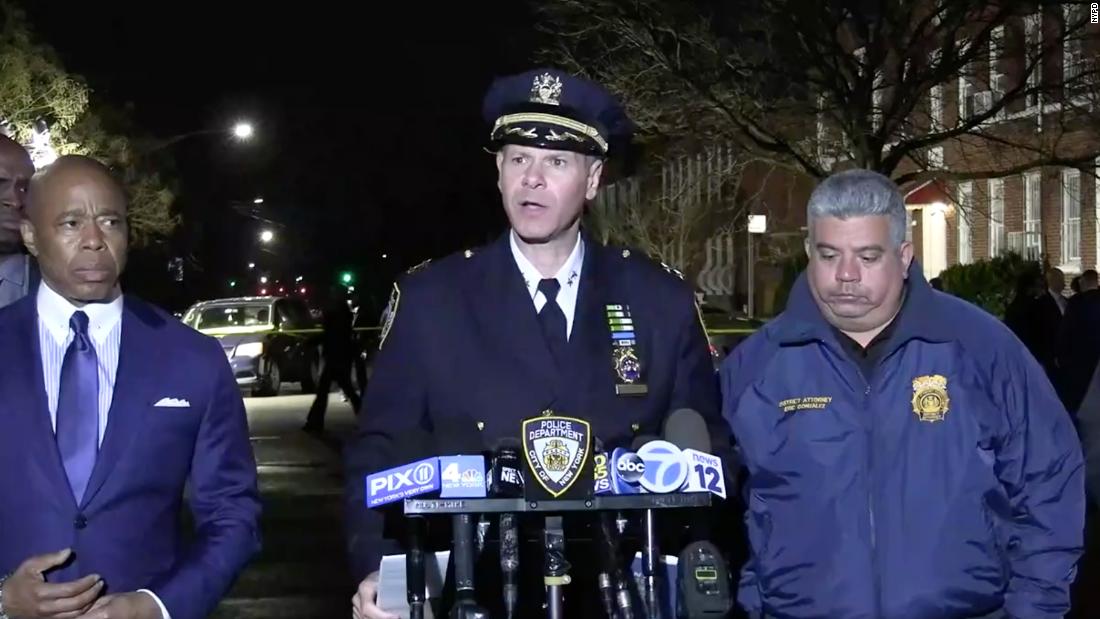 It appears the boy and his relative, a 20-year-old woman who was in the driver’s seat of the car, were mistakenly caught in the gunfire exchange in Brooklyn and were not targets, a New York Police Department spokesperson said Friday. The woman is in stable condition, police said.

Police are combing through surveillance footage and canvassing for video, a law enforcement official told CNN. The official spoke on the condition of anonymity, as the official was not authorized to speak to the media about details from the ongoing investigation.

The 20-year-old suffered gunshot wounds to her face, chest and upper leg, the official said. ​The 12-year-old, seated in the front passenger seat, died after suffering multiple gunshot wounds​, including one to the head, police previously said.

An 8-year-old girl in the car with the boy and woman was not injured, police said. Their names have not been released. ​

No arrests have been made, and police are trying to find the people involved in the shootout. Police are searching for two black sedans that were seen speeding away from the scene after the shooting.

It was one of the latest examples of gun violence in New York City, where statistics show shootings are up from 238 around this time last year to 279 so far this year through March 27.

“We are actually pleading for the public’s help and assistance in helping us solve this case,” Michael Kemper, assistant chief of NYPD Brooklyn South, said at a news conference Thursday night.

The driver, a Brooklyn woman, had pulled over so she and the children could eat, and shots were fired around 7:45 p.m., police said at Thursday’s news conference.

The gunfire came from people in two dark colored sedans, police said in a Friday news release. “A preliminary investigation determined that the victims were eating in the vehicle” when the shooting happened, the news release reads.

Joe Gulotta, deputy chief of NYPD Brooklyn South, asked the public to call in tips about two sedans that left the shooting scene.

“It’s time for it to stop,” Adams said at the news conference. “That’s why we’re here. We’re going to do our job. We need everyone to help us, ending this senseless violence.”

A controversial unit within the NYPD that was revived to battle rising gun violence hit the streets last month, promising significant training, and even new uniforms, to prevent aggressive and abusive policing tactics that had plagued its predecessor.
The so-called Neighborhood Safety Teams, the latest version of plainclothes units designed to go after firearms, was to be deployed to roughly 25 neighborhoods officials say represent 80% of the gun violence in the city. When the unit is fully built, the specialized officers will be in 30 neighborhoods and several public housing projects, city officials said. The unit replaces the anti-crime team disbanded in 2020.

CNN’s Rob Frehse and Mark Morales contributed to this report.