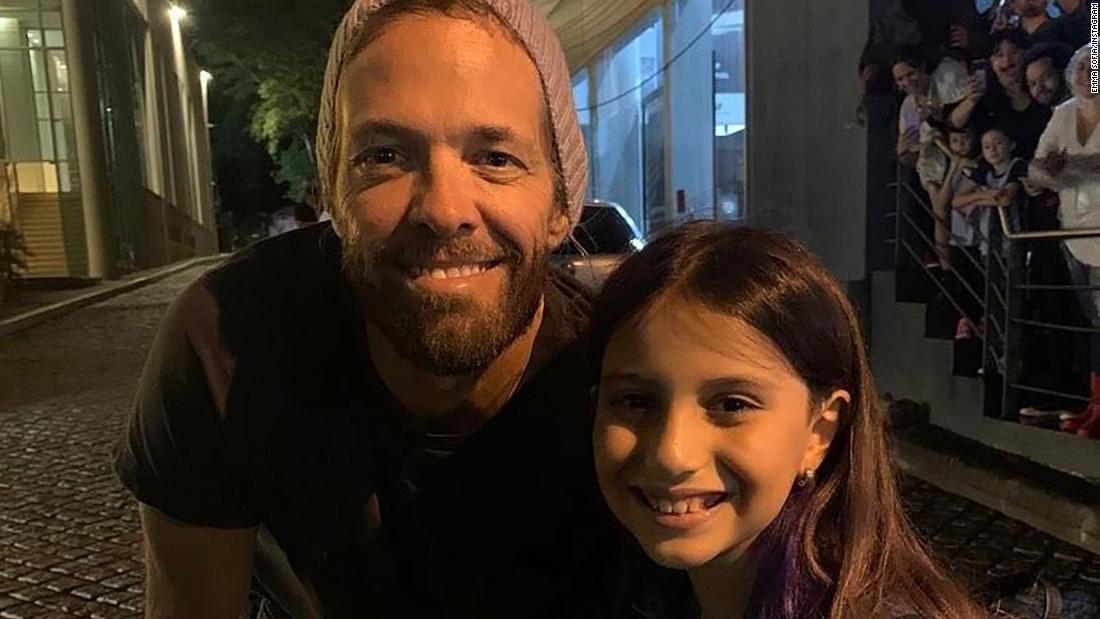 Emma Sofia was the lucky fan who got a chance to meet Hawkins just three days before he died.

She has been drumming for about two years, her father, Julio Peralta, told CNN Saturday. “She was inspired to play drums by her uncle, who is a drummer and a big fan of the Foo Fighters.” Peralta said.
On March 22, Emma and her parents had tickets for Asunciónico Festival, a music festival in Asunción, Paraguay. Artists and bands like the Foo Fighters, Machine Gun Kelly and Miley Cyrus were all set to perform.

The festival was canceled due to severe weather — but that didn’t stop Emma from trying to get the Foo Fighters attention.

A friend told the family where the band was staying, so they packed up Emma’s drum kit and headed to the hotel, Peralta said. When they arrived, fans were already lined up outside in hopes of getting a glimpse of the band.

Emma set up her kit and played for about 30 minutes, her father said, performing songs by the Foo Fighters and Nirvana as the crowd cheered her on.

Thanks to the impressive drumming and lively fans, Hawkins heard the commotion and made a trip down to meet the young drummer. He first addressed the crowd and apologized for the cancellation of the show, Peralta said, then he searched for Emma.

Fans carried her out of the crowd and over the barrier to meet Hawkins and snap a photo together.

On Friday night, when news broke of Hawkins death, Emma was performing at a local restaurant.

Her parents told her the following day that he had died and, like many other fans, she was very upset.

In a post on Emma’s Instagram, the family wrote: “We will remember him for his charisma and the beautiful gesture he had with Emma. Taylor gave us something to believe in. He was, is and always will be an inspiration.”