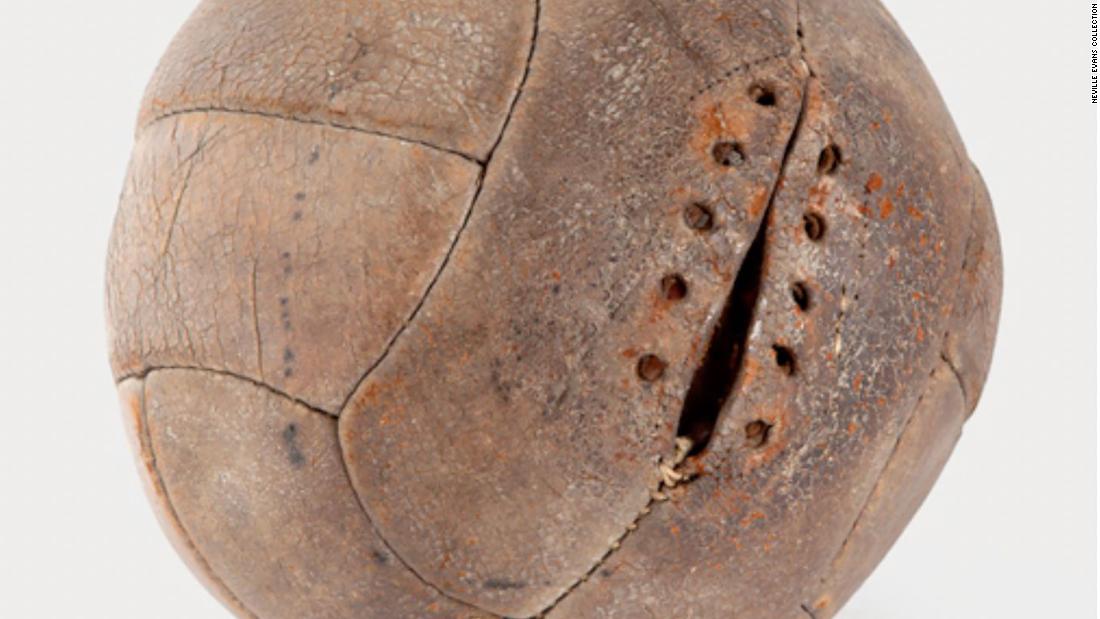 The very first FIFA World Cup final, contested by Uruguay and Argentina in 1930, started with a disagreement: Who would supply the ball?

Both teams wanted to, because they were used to playing with their own equipment and didn’t trust one another. In the end, a compromise was reached: The first half would be played with the Argentinians’ ball, and the second half with the Uruguayans’.

One of the two match balls used in the 1930 World Cup final, supplied by Argentina and used in the first half. Credit: Neville Evans Collection

“One (of the balls) had 12 panels while the other had 11, and they had slightly different weight and texture because of the difference in paneling and stitching,” said Eleanor Watson, lead curator of “Football: Designing the Beautiful Game,” a new exhibition at London’s Design Museum. “So from a technical performance aspect, it really had an influence on the outcome of the game.”

The show welcomes visitors with the very two balls used in that legendary final. They beautifully embody the stereotypical vintage football, their rough surfaces and heavy stitching a far cry from the sleek, light designs used in the modern game. And they are just two of about 500 objects — spanning equipment, uniforms, badges, photographs, banners, posters and even pieces of stadiums — that illustrate how design has shaped the world’s most popular sport.

An image from the “Posts” series by sculptor Neville Gabie, taken in Massel bel Abbes, Tunisia, in 2006. Gabie has traveled the world to photograph hand-made goal posts, simple sculptures that can give new meaning to objects and spaces with just three lines. Credit: Neville Gabie

It’s not an easy relationship to explore, or even make an exhibition about, said Watson. “To be honest with you, when I first pitched it, our head of marketing at the time told me it was a really bad idea and that people associate design and football with this very unwanted commercial presence — everything they resent and find problematic about the current state of the game.”.

The exhibition aims to set the record straight, unpicking the role designers and architects have played since the emergence of professionalism in football in the 1880s. Its scope ranges from banners and jerseys to the less expected, such as stadium architecture, graphic design, collectibles and new developments like eSports.

Boots, including several designed specifically for women, are well represented in the lineup of objects, which includes pairs worn by two of the game’s most revered players, George Best and Lionel Messi. Elsewhere, early Adidas and Puma boots represent not only the rivalry between the two German sportswear brands — founded by brothers Adi and Rudi Dassler, respectively, and part of a complex family feud — but another key design moment in the history of the sport: the development of screw-in cleats.

“In 1954, West Germany were playing in the FIFA World Cup final against Hungary, the darlings of the tournament and undisputedly the best team at that time. They were winning and then, famously, it started raining very hard,” said Watson.

At halftime, Adi Dassler, West Germany’s official footwear supplier, unscrewed the cleats on the players’ boots and replaced them with longer ones that offered better grip on the soggy pitch. West Germany went on to win the final,an unexpected victory dubbed the “Miracle of Bern,” a reference to the Swiss city that hosted the match. “At that moment, it really sunk into everyone’s mind that these pieces of performance equipment played a really important role in giving teams a competitive advantage,” said Watson.

A replica of the Hillsborough Memorial Banner, created in 2009 by Peter Carney and Christine Waygood. The original was made in the week following the Hillsborough disaster, a fatal human crush that occurred at a football game in 1989 in Sheffield, UK, causing 97 deaths and hundreds of injuries. Credit: Peter Carney

A more subtle contribution to the game — but one that has proven paramount to the identities of players and fans alike — is that of graphic design. Its influence is particularly evident in the evolution of team badges and logos. “As with so many aspects of football design, these started from a basic practical consideration: In the early days of football people couldn’t afford football kits, so a very easy way to produce one was to tell everyone to wear a badge. You would just sew one on normal clothing and hey presto, you’d have a uniform,” said Watson.

There are several iconic jerseys on display at the exhibition, perhaps most notably the one worn by Brazilian legend Pelé when he made his World Cup debut in 1958 at the age of 17. Another prominent display focuses on famous number 10s, with jerseys (many of them signed) belonging to legendary wearers of the magic number, such as Diego Maradona, Roberto Baggio, Zico and Michelle Akers, who led the US women’s soccer team to two World Cup wins and an Olympic gold medal in the 1990s.

Two of the largest objects in the collection come from stadiums: a slice of the iconic facade of the Allianz Arena in Munich, Germany, whose exterior is the largest membrane shell in the world, and an early turnstile, an object that represents the coming of age of football — the monetization that turned fans from supporters into customers.

And, just like a football match, the show has an intermission: half-time space reminiscent of stands in a stadium, where visitors can sit and enjoy a video installation of crowds at Rio de Janeiro’s famous Maracanã stadium.

The unofficial emblem of German team St. Pauli, a district of Hamburg, is made of a skull and crossbones and was adopted by the club’s traditionally leftwing fanbase.
Credit: Witters/Tim Groothius

In the final section, the exhibition showcases the work of football charities like Goal Click, which sends disposable cameras to sporting communities around the world — including the Gilgit-Baltistan Girls Football League, the first ever girls’ league in northern Pakistan — and asks them to document their experiences. “It’s a way of shining light on different kinds of people who are using football as a means to express themselves,” said Watson.

“Football: Designing the Beautiful Game” is at London’s Design Museum from April 8 to Aug. 29, 2022.

Top image: A pair of Puma Super Atoms, originally from 1952 and one of the first football boots to have removable cleats.