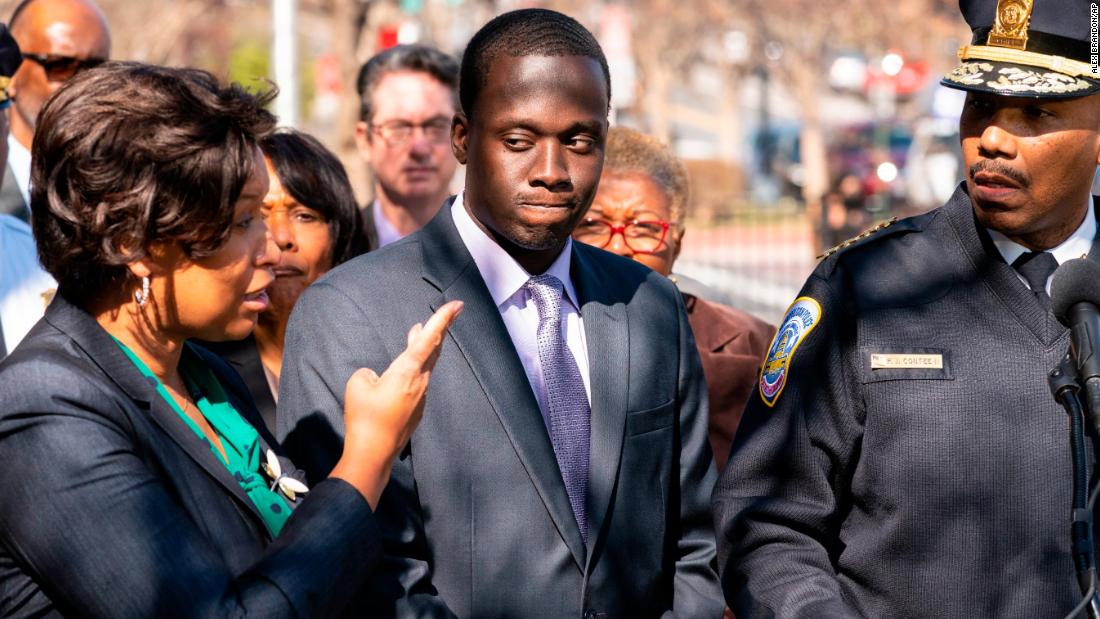 In DC, Kentish and his team were investigating a March 9 killing of a homeless person. The detective flagged the photos to his colleagues, and they reached out to New York and federal law enforcement agencies and began comparing evidence, including shell casings left behind at the scenes.

He was charged with assault with a dangerous weapon and assault with intent to kill in connection with two non-fatal shootings of homeless people and with first-degree murder while armed for the killing of 54-year-old Morgan Holmes, who also had no fixed address, DC police announced Tuesday. CNN was not immediately able to identify an attorney for Brevard.

“We’ve got our man,” Contee said during a Tuesday afternoon news conference. “This case is an example of what happens when there is good police work, science and community support.”

In a separate news conference Tuesday, NYPD Chief of Detectives James Essig said although authorities in New York City have not yet announced charges for the individual, they believe it is the same person as the DC suspect because they have connected the gun through ballistic evidence and his clothing through pictures.

“We don’t have enough to make an arrest, we’re working with the Manhattan District Attorney, we’re gathering all our evidence,” Essig said. “I’m very confident we’ll get there.”

‘A jarring act against a defenseless person’

The first known shooting happened around 4 a.m. on March 3 in DC, police said. Officers responded to sounds of gunshots and found a man suffering from apparent gunshot wounds, who was taken to a hospital for non-life threatening injuries.

On March 8, DC authorities responded to reports of another shooting a little after 1:20 a.m., and found a man suffering from apparent gunshot wounds who was also treated for non-life threatening injuries.

Both victims are recovering, Contee said this week.

On March 9, at about 2:52 a.m., a DC police member noticed a fire. The remains of a man — who police later identified as Holmes — were discovered and he was pronounced dead at the scene. A medical examiner determined the victim died of multiple stab and gunshot wounds.

At about 4:30 a.m. on March 12, officers in New York City responded to a 38-year-old man who had been shot in the arm while sleeping, Essig said. Roughly 90 minutes later, another man who was sleeping on a sidewalk was shot multiple times and was pronounced dead on the scene, Essig said.

“You’re kind of taken aback and you’re shocked that someone can commit such a jarring act against a defenseless person,” Essig said.

As soon as they linked the two shootings, New York police held a news conference Saturday night and released images of their person of interest. That’s when Kentish, the DC detective, saw the pictures, according to officials.

DC police contacted the NYPD Sunday morning, Essig said, and by 2 p.m., “it is confirmed that all five instances — the three in DC and the two in New York City — are a match and are a ballistics’ lead.”

Authorities say they’re still investigating how the suspect moved between the two cities, but suspect he may have taken public transportation, Essig said.

A gun has not been recovered as part of the investigation, authorities said. The suspect has had “multiple contacts with police in various states,” Essig said.

Brevard has not offered a motive, Contee said, and authorities are not certain about any connections he may have to the victims.

What advocates say the shootings highlight

As police searched for the perpetrator of the crimes, DC and New York City leaders urged homeless residents to seek shelter.

But advocates say that for some people experiencing homelessness, shelters can be unsafe and dangerous environments too, and that the recent spate of violence highlights how important it is for elected leaders to invest in ensuring housing and resources for homeless residents.

“We know that homeless people are more likely to be the victims of crimes than the perpetrators but unfortunately much of the discourse lately has been vilifying homeless New Yorkers and painting them as dangerous, rather than recognizing the inherent dangers that people without housing face,” Jacquelyn Simone, policy director for the Coalition for the Homeless, told CNN affiliate WABC.
The group has also linked New York City Mayor Eric Adams’ recent initiative to clear out the subways to the violence.
Officials say the city’s plan, which Adams unveiled in a joint news conference with New York Gov. Kathy Hochul last month, will work to combat crime and address homelessness in the subway system, but critics have said it criminalizes people experiencing homelessness and mental illness.

“We had said at the time that if the city was not actually investing in the types of shelters and permanent housing that people want and need, that people would just be relocated from the subways onto the streets,” Simone told the affiliate.

Adams stood by the initiative this week, telling reporters, “We are not going to allow the residents of our city to be in a position where they can’t take care of themselves or they’re dangerous to others.

When asked on Monday about the efforts to help unsheltered residents find permanent housing, DC Mayor Muriel Bowser said the city is continuing a pilot program that aims to provide people living in certain encampment sites with resources, move them to affordable housing and clear out unsafe living areas.
But advocates have expressed concern that the program could leave many people on the margins again if unsheltered residents aren’t properly accommodated as officials clear out the sites — and could contribute to further criminalizing homelessness.