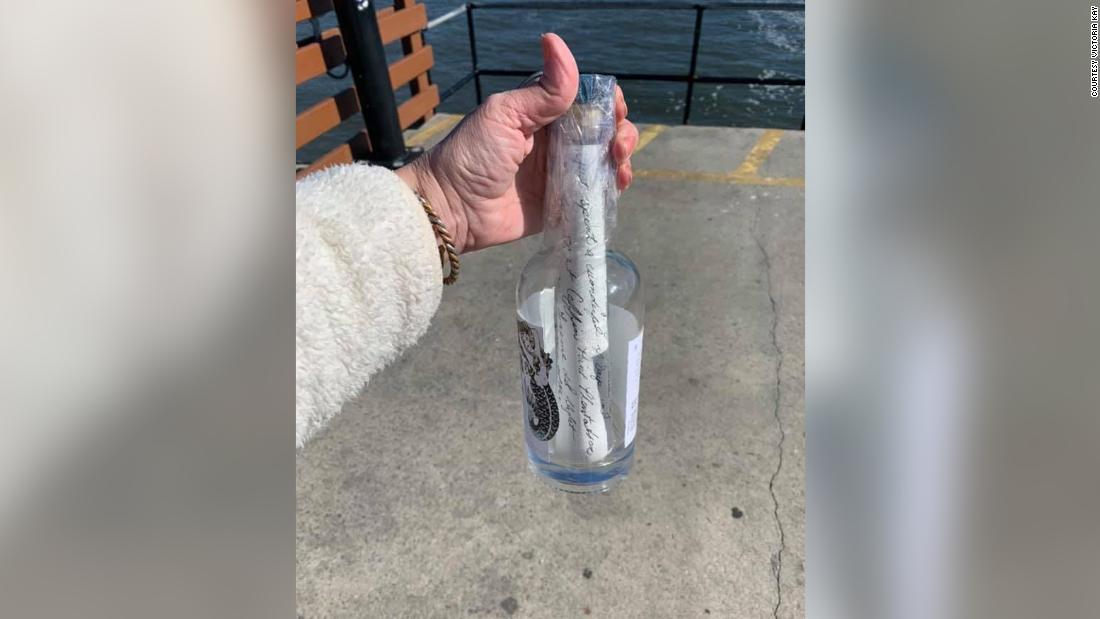 In January 2020, Victoria Kay and her boyfriend, Graeme, were visiting St. Simons Island in Georgia from Knoxville, Tennessee.

Kay told CNN she has been painting her entire life, and decided to paint a scene from one of her favorites, a maritime forest, in watercolor.

She happened to have a bottle with her and decided at the last minute to roll up the painting, place it inside the bottle, tape it up and toss it off the pier into the ocean.

“I had no idea it would ever take off to France,” Kay recounted, “It was just on a whim, I’ve never done this before.”

She added a message on the back wishing the finder a happy new year, and Graeme suggested she put her email on the note as well, as a way for someone to contact her if the bottle was found.
Little did Kay know more than two years later, the bottle would end up on the coast of Brittany in France, more than 4,000 miles away.

Kay said she completely forgot about the bottle until an email arrived in her inbox on March 13, 2022, from Martine Bosc.

“This morning while walking my dog near the beach, I found your bottle with the message of January 5, 2020.” The email read, “I discovered your message and your painting. And I was delighted to read it.”

Neither Kay nor Bosc could believe the bottle survived in the water for more than two years.

Kay was worried when she threw it off the pier in St. Simons, it would hit the capsized ship sitting in the water nearby. And throughout the bottle’s journey, she thought it might have become stuck in the sand somewhere or broke along the way.

She also noted how amazing it was she and Bosc were able to connect.

“During the whole pandemic while this bottle was floating through the ocean, neither I nor she succumbed to the illness.” Kay said.

The experience is one Kay ties to some life advice her soon-to-be 90-year-old father gave her.

“He always said, ‘If you want good things to happen in your life, you have to throw out good boomerangs,’ ” Kay said. And she believes the bottle was one of the “good boomerangs” she threw out.

Throughout the past few weeks, the two have kept in contact over email. Bosc writes to her in English, and they have gotten to know each other.

As the friendship has formed, the two have even invited each other to their homes and hope to meet soon.

“I’ve never been to France, so I think I need to get a ticket.” Kay said.