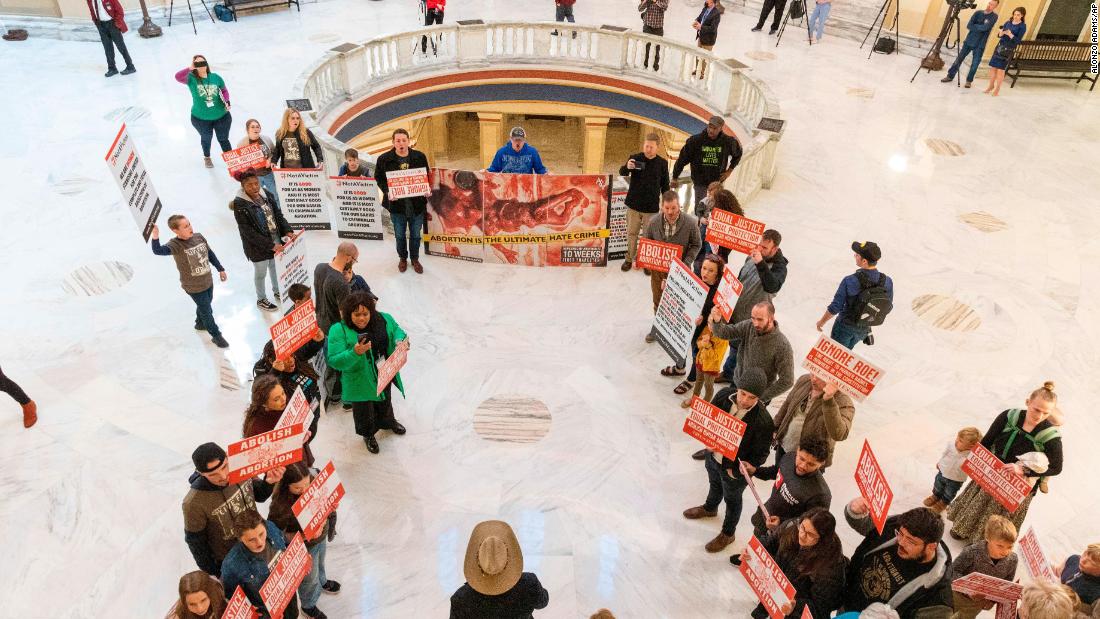 Here’s a look at some of the legislation that has passed this session, what’s next for the bills and what else is under consideration. The wave of activity on the state level comes ahead of a highly anticipated ruling by the US Supreme Court expected later this year that could have major implications for abortion.

Oklahoma — The GOP-controlled Legislature passed a ban on abortion on Tuesday, making exceptions only for medical emergencies. It would make performing an abortion or attempting to perform the procedure a felony punishable by up to 10 years in state prison, a $100,000 fine or both. The legislation would not provide exceptions in cases of rape and incest. What’s next: Republican Gov. Kevin Stitt is expected to sign the bill.
Idaho — Republican Gov. Brad Little signed a bill modeled after the Texas law that bans abortions after embryonic or fetal cardiac activity has been detected, making Idaho the first state to follow the controversial Texas statute that allows private citizens to enforce the restrictions with lawsuits. What’s next: Abortion providers are suing, asking the Idaho Supreme Court to strike down the law before it goes into effect on April 22.
Arizona — Republican Gov. Doug Ducey signed into law legislation that prohibits abortions after 15 weeks of pregnancy, except in some cases of medical emergency — becoming the first state this year to enact a ban after 15 weeks, following a similar law Mississippi passed in 2018 that the US Supreme Court seems poised to uphold this year. The bill offers no exceptions for cases of rape and incest.
Kentucky — The GOP-majority Legislature gave approval to a sweeping bill that would ban most abortions after 15 weeks of pregnancy, restrict access to medication abortion and make it more difficult for a minor to obtain an abortion in the state. What’s next: The bill was sent to Democratic Gov. Andy Beshear, though it’s unclear how he will act. Beshear could choose to sign the bill or to allow the legislation to become law without signing it. If he were to veto the bill, however, Republicans have the majority to easily override him. He has until Monday to act.
South Dakota — Republican Gov. Kristi Noem on March 23 signed a law that will further restrict access to medication abortions in the state. The law makes South Dakota one of hardest places in the country to get abortion drugs, requiring pregnant women to make at least three trips to a clinic to obtain abortion medication. The measure, however, will not take effect immediately due to litigation. What’s next: The law will not go into effect unless the judge’s injunction is lifted, which Noem’s administration is seeking through an appeal.

Florida — Republican Gov. Ron DeSantis on March 28 signed legislation banning certain instruction about sexual orientation and gender identity in the classroom, approving a controversial measure that opponents have dubbed the “Don’t Say Gay” law. HB 1557, titled the Parental Rights in Education bill, was given final passage by Florida’s GOP-controlled Legislature last month. What’s next: Two LGBTQ rights advocacy groups, as well as students, parents and a teacher in Florida, filed a federal lawsuit last Thursday challenging the new law and seeking to block its implementation and enforcement. The law is set to take effect in July.
Ohio — Two Republican state representatives introduced a bill in the state legislature on Monday that would ban the teaching or providing of “any curriculum or instructional materials on sexual orientation or gender identity” to students in kindergarten through third grade, using similar language to the Florida law critics have named “Don’t Say Gay.” If passed, the measure would also forbid Ohio public school educators in grades four through 12 from teaching or using “instructional materials on sexual orientation or gender identity in any manner that is not age-appropriate or developmentally appropriate for students in accordance with state standards.” What’s next: Awaiting votes in the state House.
Texas — The state began investigating families seeking gender-affirming care for their transgender minor children after Republican state Attorney General Ken Paxton declared such treatment to be “child abuse.” Republican Gov. Greg Abbott directed the Department of Family and Protective Services to begin the investigations. The American Civil Liberties Union sued on behalf of the parents of a transgender girl and an appeals court has upheld a temporary injunction blocking the action. What’s next: Paxton has asked the state Supreme Court to intervene to allow the child abuse investigations.
Arizona — Ducey signed two bills into law targeting transgender youth in the state, prohibiting trans girls and women from competing on women’s and girls’ sports teams and restricting youth access to gender-affirming care. What’s next: The ACLU has vowed to sue to block the law restricting gender-affirming care.
Oklahoma — Stitt signed legislation banning transgender women and girls from competing on sports teams consistent with their gender at public schools, public charter schools and public colleges in the state.
Iowa — Republican Gov. Kim Reynolds signed legislation banning transgender women and girls from participating on sports teams consistent with their gender at accredited schools and colleges.

South Dakota — Noem signed a law banning transgender women and girls from competing on sports teams consistent with their gender at accredited schools and colleges.

South Dakota — Noem signed an executive order on Tuesday restricting the teaching of critical race theory in K-12 schools after the state Senate Education Committee killed a bill that would have accomplished a similar goal. Noem has also signed a law this session blocking mandatory critical race theory trainings and orientations at colleges in the state.
Georgia — The state legislature approved this week a bill that would limit discussions about race in classrooms and prohibit schools from advocating “divisive concepts,” including discussion that people “should feel anguish, guilt, or any other form of psychological distress” about their race and that “the United States of America is fundamentally racist.” The bill would also allow the Georgia High School Association to ban transgender students from participating in girls’ sports in public high schools. What’s next: The bill now heads to Republican Gov. Brian Kemp for signing.
Ohio — A bill introduced on Friday mirroring the Florida law critics have dubbed “Don’t Say Gay” would also ban curriculum for all grades that teaches, promotes or endorses what it calls “divisive or inherently racist concepts.” It would outlaw any textbook, instructional material or academic curriculum that “promotes” concepts such as critical race theory; intersectional theory; The 1619 Project; inherited racial guilt; diversity, equity and inclusion learning outcomes; inherited racial guilt; or “any other concept that the state board of education defines as divisive or inherently racist.” What’s next: The bill awaits a vote in the state House.

Florida — The Republican-controlled Florida House passed a voting overhaul bill that would create a security office to investigate election crimes and increase penalties for violating the state’s election laws. The legislation would establish a scaled-back version of an elections police force first proposed last year by DeSantis. What’s next: The bill will be sent to DeSantis’ desk for a signature.
Georgia — State lawmakers passed a bill on their final day of the session Monday that would give new election policing powers to the state’s bureau of investigation. Georgia becomes the second state after Florida to pass an election police force bill this year as Republicans continue to falsely claim the 2020 election was rife with voter fraud. What’s next: The bill awaits Kemp’s signature. He has 40 days to sign the legislation or veto it.