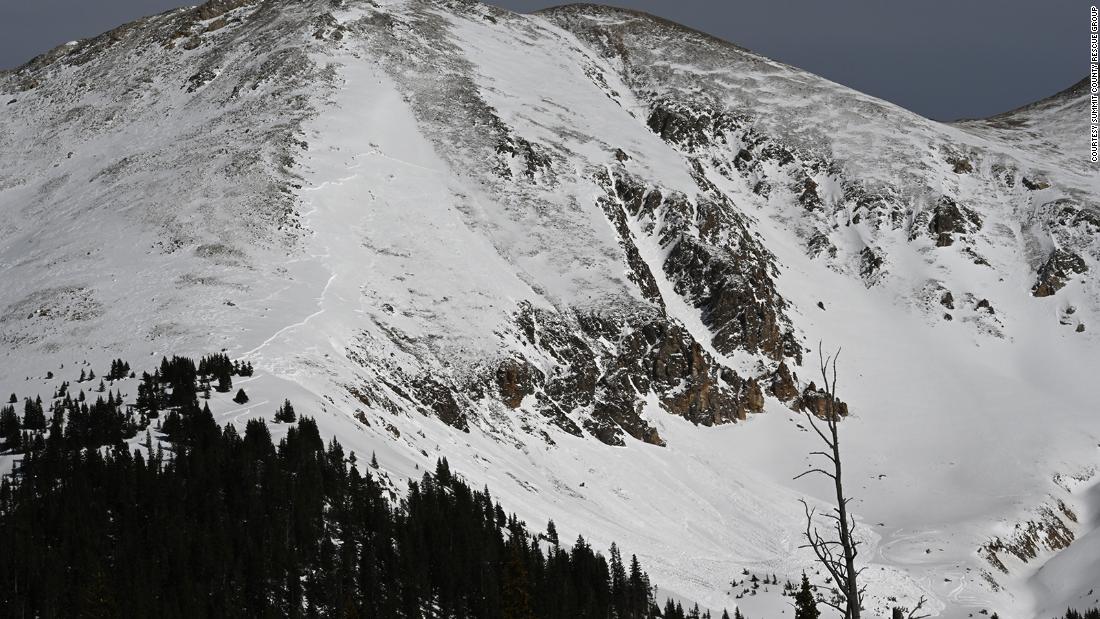 Anna DeBattiste, public information officer for the Summit County Rescue Group (SCRG), told CNN on Monday that the skier sustained no injuries aside from some slight bruising.

DeBattiste said the incident began Saturday when a mother and son went up Loveland Pass, a point on a mountain located about 60 miles west of Denver.

The ski chute they were heading to, locally known as Butt Crack, is one that the pair needed to rappel down into.

A piece of their gear did not release correctly during rappelling, so they went back Sunday to retrieve it.

To get to the gear, the son cut across a steep slope on the ridge, triggering an avalanche. It took him 200 to 300 feet down the mountain, including off a cliff estimated to be 50 feet high, DeBattiste said.

This is what is called a terrain trap, according to DeBattiste and experts at avalanche.org — a situation where a gully, trees or a cliff could make the consequences of an avalanche even worse.

“You can have a transceiver, a shovel, a probe and an avalanche air bag but if you get caught in a terrain trap then none of that stuff is going to matter,” DeBattiste said.

It took the mother about 10 minutes to ski down to her son, finding him stuck waist-deep in snow.

DeBattiste says she is unsure who called in the avalanche — whether it was the woman or a witness — but the SCRG crew arrived at the scene. They were joined at the foot of the mountain by Summit County Sheriff’s Office, a Colorado Rapid Avalanche Deployment team, Arapahoe Basin Ski Patrol and Flight for Life Colorado.

Ultimately the pair were able to ski out on their own.

The two were experienced and knowledgeable local skiers, according to DeBattiste, and the son had an avalanche air bag he was unable to deploy during the tumble.

According to the Colorado Avalanche Information Center (CAIC), there have been three fatalities in Colorado this season already, two of which were at Loveland Pass.

“We’re (Summit County) known where the snowpack can be tricky and avalanche danger is often high,” DeBattiste said.

Most avalanches occur on slopes that are between 30 and 45 degrees, which is why, DeBattiste says, it’s important for skiers to learn how to evaluate slope angle.

And even for those who are experienced, DeBattiste advises, “Don’t take anything for granted, even though the avalanche danger is relatively low right now.”

There are plenty of websites to check the avalanche forecast before going to the slopes.