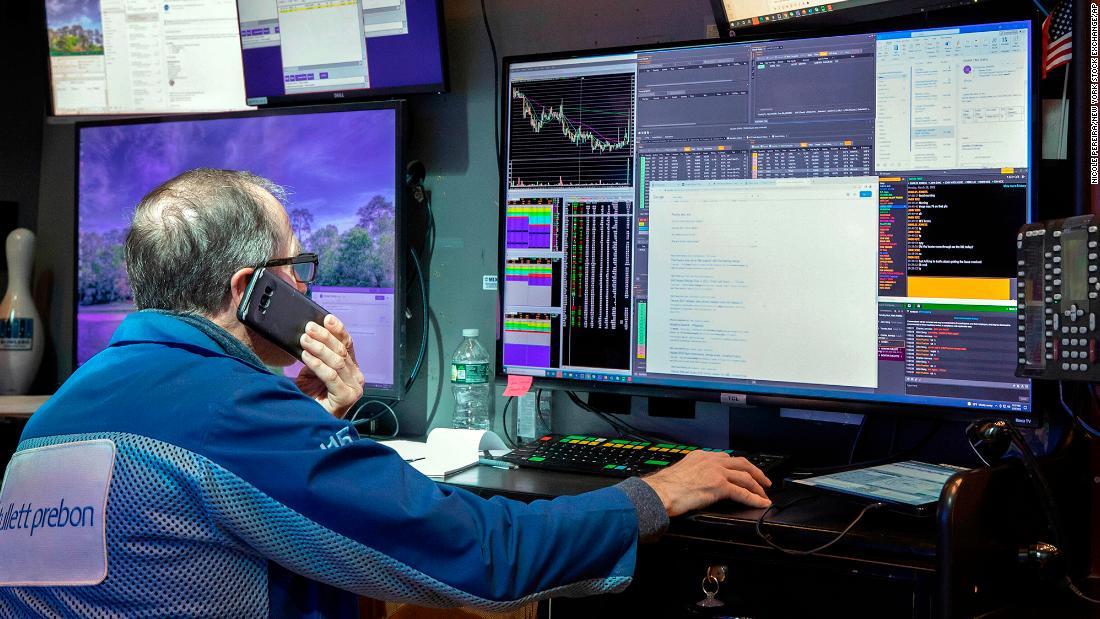 The Dow and S&P 500 are both down nearly 4% through the first quarter, while the Nasdaq plummeted more than 8%. It’s the worst quarterly performance for the markets since stocks tanked in the first quarter of 2020 when the Covid-19 pandemic first hit US shores.

Concerns about Russia’s invasion of Ukraine, surging oil prices, widespread inflationary pressures, Federal Reserve interest rate hikes and lingering worries about the ongoing pandemic have all combined to keep a lid on stocks.

Investors now seem particularly nervous about the housing market and consumer spending. Home Depot (HD) and Nike (NKE) are the worst performers in the Dow so far this year. Walgreens (WBA), Disney (DIS) and McDonald’s (MCD) are laggards as well.
There is also a sense that the tech sector, after surging for the past few years, might finally be cooling off. Salesforce (CRM) and Cisco (CSCO) helped drag down the Dow. Microsoft (MSFT) also underperformed.

Investors are shunning riskier stocks. Blank check SPAC firms tanked during the first quarter and the market for initial public offerings ground to a halt. According to data from EY released Thursday, the number of global IPOs plunged 37% from a year prior.

“The market shock from geopolitical tensions and other economic concerns in the second half of the quarter created volatility and impacted the capital markets,” EY global IPO leader Paul Go said in the report. “There is a risk that IPO activity will continue to slow further with IPO candidates choosing to postpone their transactions.”

Meme stocks, such as GameStop (GME), AMC (AMC) and Robinhood have been volatile too. GameStop shares are now actually up for the year but remain well off their highs. AMC and Robinhood are both down in 2022.

Value triumphs over growth and momentum

But there have been some market winners this year. Energy stocks have surged along with crude oil prices. Chevron (CVX) is the top stock in the Dow, up more than 40%.
Several financial stocks have rallied too, thanks in part to the expectation that higher interest rates will lift profits. American Express (AXP) and insurer Travelers (TRV) are two Dow leaders this year.

In other words, momentum stocks have clearly lost their appeal to sectors in more bargain areas of the market.

“This trend of value over growth appears to be still in its early stages, given the Fed’s clear intentions to raise rates through 2022 and 2023,” said David Keller, chief market strategist at StockCharts.com.

But not all financials have benefited. Investment banks have come under pressure due to concerns about the broader market and economy. Goldman Sachs (GS) and JPMorgan Chase (JPM) are both down more than 10% this year.

“Most financials were rallying in anticipation of rate hikes, right up until the beginning of a tightening cycle,” said Michael Arone, chief investment strategist with State Street Global Advisors. “But now that portions of the yield curve are inverting, that poses challenges.”

Arone is referring to how some shorter-term bonds have rates higher than long-term Treasuries. When that happens, it’s often a sign that a downturn or recession is in the cards.

Arone said he doesn’t expect doom and gloom per se, but he thinks investors do need to prepare for a slowdown.

“Think about higher quality, dividend paying stocks to offset the harmful impact of inflation,” Arone said, adding that energy and materials companies should benefit from rising rates and higher commodity prices. “Investors need to recalibrate their portfolios but not do anything overly dramatic.”