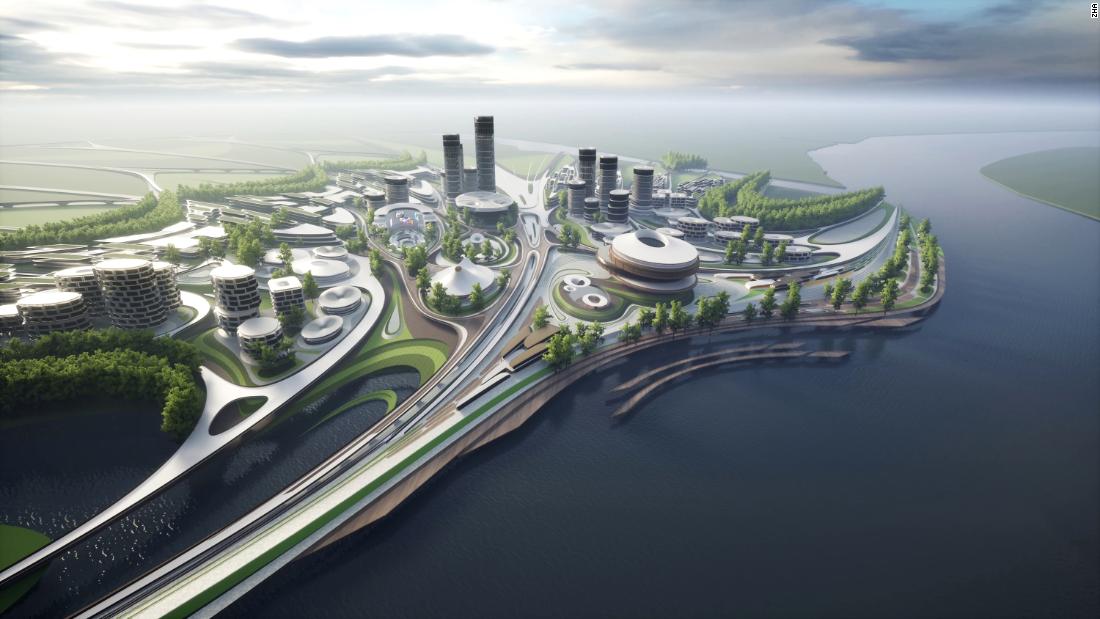 One of the most prominent architecture firms in the world is designing a new metaverse — a virtual city that hopes to be a libertarian utopia.

Zaha Hadid Architects (ZHA) has revealed renderings of the “cyber-urban” Liberland Metaverse, a small virtual city made of futuristic, curving buildings in the architectural style that made the late architect’s firm famous. When complete, it will offer users the ability to traverse the hub as an avatar, and feature a city hall, collaborative working spaces, shops, business incubators, and a gallery for NFT art shows. The community it hopes to foster will have a focus on self-governance as well as fewer rules and regulations.

A rendering of the Liberland Metaverse plaza. Credit: ZHA

Those ideals are based on the so-called Free Republic of Liberland, a real-life micronation founded by Czech politician Vit Jedlicka in 2015 with a goal to implement small government libertarian values. Wedged between Serbia and Croatia, the 2.7-mile territory, which is larger than the Vatican and Monaco, is a disputed land and claimed by neither country. Since its founding, no one has moved to Liberland, which lacks any infrastructure, nor has construction started in earnest. But it does have 7,000 approved residents and 700,000 applications, according to Jedlicka, who told CNN in an email. The micronation also has a national flag, anthem and currency — the cryptocurrency Liberland merit.

At the time of its founding, both Serbia and Croatia dismissed the micronation in statements to CNN, with the Serbian Ministry of Foreign Affairs saying they considered it “a frivolous act which needs no further comment.” Liberland has not been recognized by any other nation.

Liberland Metaverse will have “incubators” for tech innovation. Credit: ZHA

But now the micronation is hoping to stake its claim in the virtual world. Metaverses, which are often built using blockchain technology, are an ideal space for libertarianism ideals to thrive, according to ZHA principal architect Patrik Schumacher, because of the political philosophy’s shared goals of decentralization and autonomy. He has been interested in Liberland since it was founded in 2015 and soon after attended his first conference.

“It’s a very lively scene of contributors…a lot of IT and crypto and tech entrepreneurs who find the world too restrictive,” he described.

Though many metaverse concepts have been born out of video game aesthetics — Mark Zuckerberg’s concept for a Metaverse, for example, looks similar to Nintendo Wii’s avatar design — the digital architecture of Liberland is meant to be more grounded in reality. The buildings, while hyper-futuristic, are similar to the glossy look of typical architectural renderings. But they were made with parametric design — a method that employs algorithms to create complex forms.

“I believe the metaverse is not a fantasy world. It’s not a video game,” Schumacher said. “(Liberland metaverse’s architecture) is unusual and unique, but at the same time is realistic with respect to the kinds of architecture we have built already and which will be coming.”

However, he added, there is more freedom in virtual design. The renderings show the firm’s ability to push the boundaries of what they could achieve with physical buildings, from impossible features like hovering rooftops, to vast interiors that don’t have to factor in considerations like energy efficiency. Schumacher is also excited about the possibility of adaptive environments, with rooms like auditoriums that can expand based on the number of users in them.

The metaverse directly references the real world, mimicking the same borders of the Free Republic of Liberland. One of the main draws of the project will be its system for virtual and physical land ownership, with digital stakeholders owning a part of the terrain as well. But those details are still being ironed out, Schumacher explains.

“It might be a proportion; it might be a particular piece of land — we haven’t fully worked it out,” he said. “But we like that integration of virtual and real land. And that’s one of the core premises of the project.”

So how else will a libertarian metaverse be different from other metaverse environments?

“That’s going to be an exciting question,” Schumacher said.

Though the digital infrastructure and its policies are still in the works, he describes a digital space with different areas, where “certain zones which will be free of collective rulemaking” — though users will still be subject to laws in their countries.

But while many online forums and social media companies have had to grapple with how much to moderate their users, with sites like Reddit having to move away from their ideals of unmitigated free speech as their user base ballooned, Liberland will start out as an exclusive space and expand slowly, in order to keep its community in check. Jedlicka confirmed that Liberland citizens and residents will have first access.

A view of what the Liberland Metaverse will look like from the user perspective. Credit: ZHA

Schumacher is optimistic about the Liberland metaverse remaining a digital space unfettered by rules. “If you start off with a clean environment, and…you don’t throw garbage around, that can be maintained without much policing,” he said.

Currently, part of the metaverse is being tested through two virtual floors in one of the buildings — a co-working area that is open to invited guests around the clock, who can explore the space as avatars, chat with each other and share their screens on one of the room’s windows, which acts as a presentation screen. On April 13, which is the birthday of the third US President and libertarian hero Thomas Jefferson and the anniversary of the physical Liberland, there will be an opening party for 100 people, who can move between a few spaces within the city.

Though it’s still unclear whether or not the hype around metaverses will translate into mass adoption, Schumacher is committed to the vision. The firm debuted a virtual exhibition space with artist Kenny Schachter during Art Basel in 2021, and has another undisclosed metaverse project in the works. Schumacher believes all institutions in the future will have both physical and digital spaces, catalyzed by the need to be more online during the pandemic.

“I think these hybrid (and) mixed-reality spaces will be very important in every place of work,” he said. “I think it will be absolutely pervasive.”

Top image: A masterplan of the Liberland metaverse.