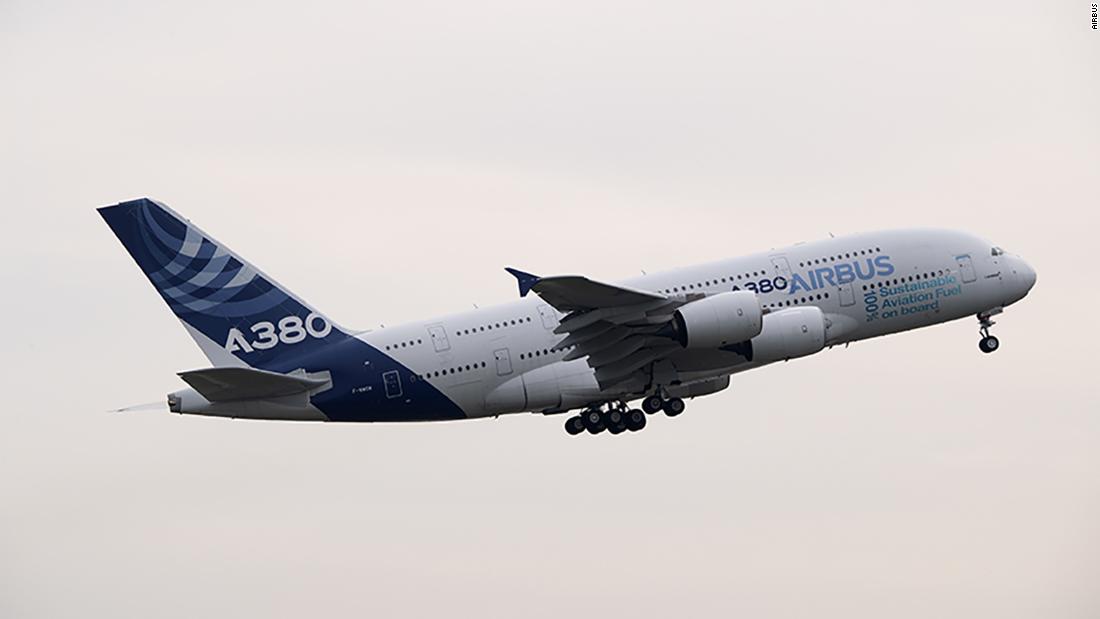 (CNN) — It’s huge, it’s wide, and it’s potentially a lot more sustainable. The Airbus A380, a behemoth of the skies, has completed a trial flight powered on cooking oil.

The test airplane completed a three-hour flight from Blagnac Airport in Toulouse — Airbus’ French headquarters — on 25 March. It was powered by Sustainable Aviation Fuel, or SAF — predominantly made of used cooking oil and waste fats — and operating on a single Rolls-Royce Trent 900 engine.

Airbus then followed up with a second A380 flight, using the same cooking oil fuel, on March 29, flying from Toulouse to Nice. The second flight was to monitor SAF use during take-off and landing.

The fuel used was supplied by TotalEnergies, a company based in France’s Normandy region. It was made from Hydroprocessed Esters and Fatty Acids (HEFA), which is free of both aromatics and sulfur.

Airbus has been testing the use of SAF-powered flights for the last year, with an A350 being tested in March 2021, and an A319neo single-aisle aircraft flying on cooking oil in October. The company hopes to get its aircraft certified to fly on SAF by the end of the decade. Currently, Airbus aircraft can be powered by up to 50% SAF, blended with traditional kerosene.

“Increasing the use of SAF remains a key pathway to achieving the industry’s ambition of netzero carbon emissions by 2050,” said Airbus in a statement. The company claims that flying planes on SAF could net between 53% to 71% of the carbon reductions required to meet that goal.

Airbus plans to bring the world’s first zero-emission aircraft to market by 2035.

SAF, which claims carbon neutrality because of the CO2 absorbed while its organic ingredients are being grown, is already being used in limited amounts by some airlines. But high prices mean that widespread adoption isn’t expected anytime soon.

The world’s largest passenger airplane, the A380’s fortunes have been in decline in recent years with several airlines calling time on their use, partly on the grounds that they’re less fuel efficient than more modern long-range airplanes. Airbus delivered the final ever A380 to Dubai airline Emirates in late 2021.

More recently, Airbus announced that the giant plane would be pressed into service to test an experimental hydrogen-powered engine, another innovation aimed at making flying less environmentally harmful.