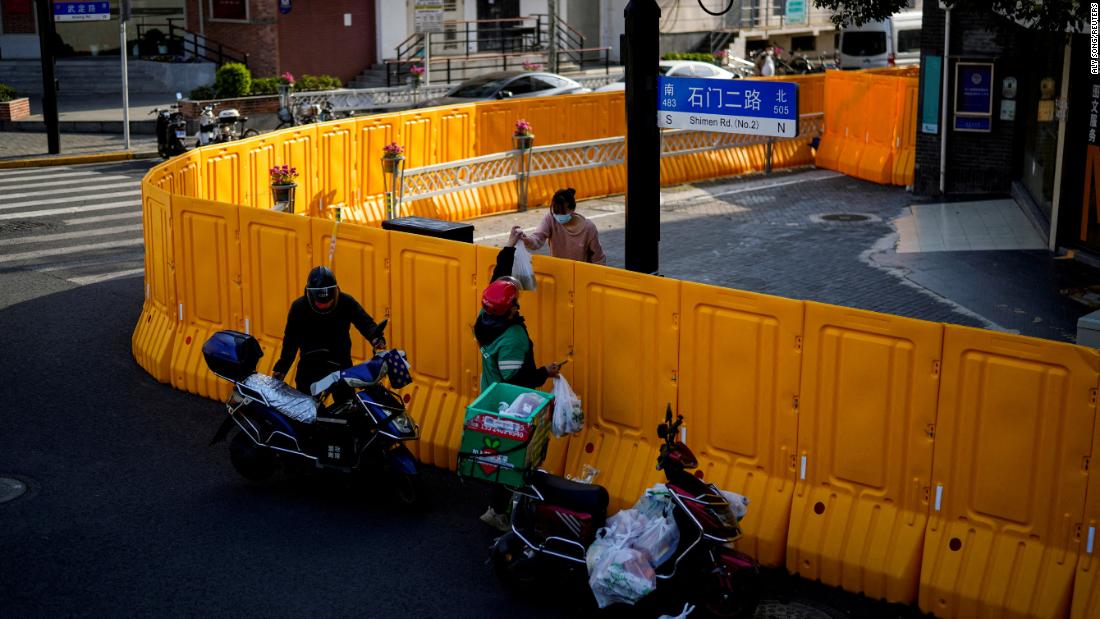 Restricted borders, constant digital tracking, and the potential for mass testing and snap lockdowns whenever a handful of cases appeared were all trade-offs for a comparatively Covid-free life while the pandemic raged overseas.

In the tech hub of Shenzhen on Sunday, videos shared online showed residents protesting in a locked-down district, after restrictions lasted for several days longer than scheduled, according to social media posts.

“You can’t do this — we need to eat and pay the rent,” a man among a crowd of protesters is heard yelling in anguish at health care workers, who stood behind high plastic barriers, according to a video shared online.

“Unlock! We demand lifting the lockdown!” others shouted in a second clip.

In another instance, in the neighboring city of Guangzhou earlier this month, thousands of people were seen in video footage trying to escape being caught up in a snap lockdown at a trade fair. Some hopped fences to avoid being locked inside the venue after a single positive case was found.

Such scenes are largely unprecedented in China’s two-year fight against the virus. And while many remain supportive of keeping Covid-19 at bay, these instances are not the only signs of changing attitudes, as millions remain under lockdown and cases continue to climb in China’s worst outbreak since early 2020.

The case against living with the virus

The extreme measures are being rolled out even as the health impact of Covid-19 within the highly vaccinated country has been minimal, so far.

The caseload this month has now exceeded 41,000. Though it is not clear how many of these cases are severe, only two deaths have been reported since the beginning of the newest outbreak. Earlier this month, when the caseload stood at 29,000, officials reported some 95% were mild or asymptomatic.

Some Chinese citizens now appear to think the health measures are more onerous than the illness.

On China’s popular — and heavily censored — social media platform Weibo, a question about why China isn’t relaxing its Covid-19 restrictions like other countries was the top trending hashtag on Wednesday, racking up over 500 million views.

The top post linked to an interview, given by the head of the National Health Commission’s expert panel on Covid-19, that stressed China must “persist” in its strategy to protect the vulnerable.

The prominence of such a conversation is itself a radical departure from how questions had been dealt with in the past.

Last summer, for example, esteemed Shanghai infectious disease physician Zhang Wenhong came under a vitriolic nationalist online attack for merely suggesting the country would need to eventually find a way to coexist with the virus.

Now, these conversations are playing out in the open as huge swaths of the country face significant restrictions to their daily lives in the latest outbreak.

At least 25 million people across four cities are under lockdown in northern provinces of Jilin and Hebei, and an untold number of others have been subject to district or neighborhood level lockdowns this month, including in the affluent first-tier cities of Shanghai and Shenzhen.

A stark example of the human toll of China’s stringent measures came on Wednesday, when an off-duty nurse died of an asthma attack in Shanghai after being reportedly turned away from several hospitals, including Shanghai East Hospital, where she worked.

The hospital released a statement on Friday saying that its emergency room was temporarily closed for Covid-19 disinfection when the nurse’s family drove her there. Several outpatient and emergency departments across Shanghai have been shut due to exposure to positive cases.

Wu Jinglei, director of Shanghai health commission, offered his condolences to the nurse’s family and vowed to reduce the disruption to normal medical service, especially for emergency rooms, while hospitals are being disinfected.

Reports about residents not being able to receive non-Covid medical treatment or having inadequate access to supplies in Shanghai were circulating on social media earlier in the week. These were noted by Shanghai’s prominent specialist Zhang, who called for such issues to be “addressed in the future.”

“Otherwise, the significance of the success of the fight against the Covid-19 will be largely compromised,” Zhang, who is head of the Center for Infectious Diseases with the Shanghai-based Huashan Hospital of Fudan University, wrote on his verified Weibo account Thursday.

Shanghai is facing its most serious outbreak yet, with 1,609 Covid-19 cases reported Thursday. And while authorities have denied they plan to lock down the city of 25 million people, numerous residents tell CNN that a growing number of neighborhoods are being temporarily sealed off to undergo mass testing — as part of a “rolling lockdown” strategy — with local officials vowing Wednesday to “further strengthen the prevention and control measures.”

And even in a city with some of the best infrastructure in the country, social media complaints suggest that systems to ensure residents have what they need are failing, as lockdowns are extended without notice.

“How can I buy groceries? … I can’t get medicine for my kids …how can we order this online when we can’t even get a hospital appointment?” wrote one social media user, who said their Shanghai neighborhood had been closed for 15 days.

Another complained that she was without staples after listening to the government’s assurances that supplies were sufficient and there was no need to hoard.

“They said there was enough food…but they didn’t mention there weren’t enough people to deliver it,” she said.

On Wednesday, Shanghai’s health authorities responded to a question about how citizens in the city’s Jiading district could report problems buying groceries. Officials noted they were making “every effort” to ensure supplies by supporting them to use online platforms to get what they needed or arranging bulk purchasing and distribution. They also explained that some neighborhoods may see control periods extended if positive cases are found, as screening will need to start again.

As for those wondering when the zero-Covid strategy will end, China’s health officials have been ambiguous.

When asked a press conference on Tuesday, government epidemiologist Liang Wannian said China must “not waver” and stick to its plan, while waiting for a range of things to happen: outbreaks to ease overseas, the virus to mutate to become less dangerous, and better treatments and vaccines to become available.

“Under these circumstances, I believe we will thoroughly evaluate the situation of the epidemic in China….and then take more adaptive measures to counter the disease,” he said.

But for those in China who are counting the days until they can be released from lockdown, such answers may not be reassuring.

As one social media user, who expressed concern that a lockdown in his Shanghai complex could be continually extended, wrote on Weibo this week: “Have the people in charge really not studied this issue carefully? The price paid by people inside is endless.”