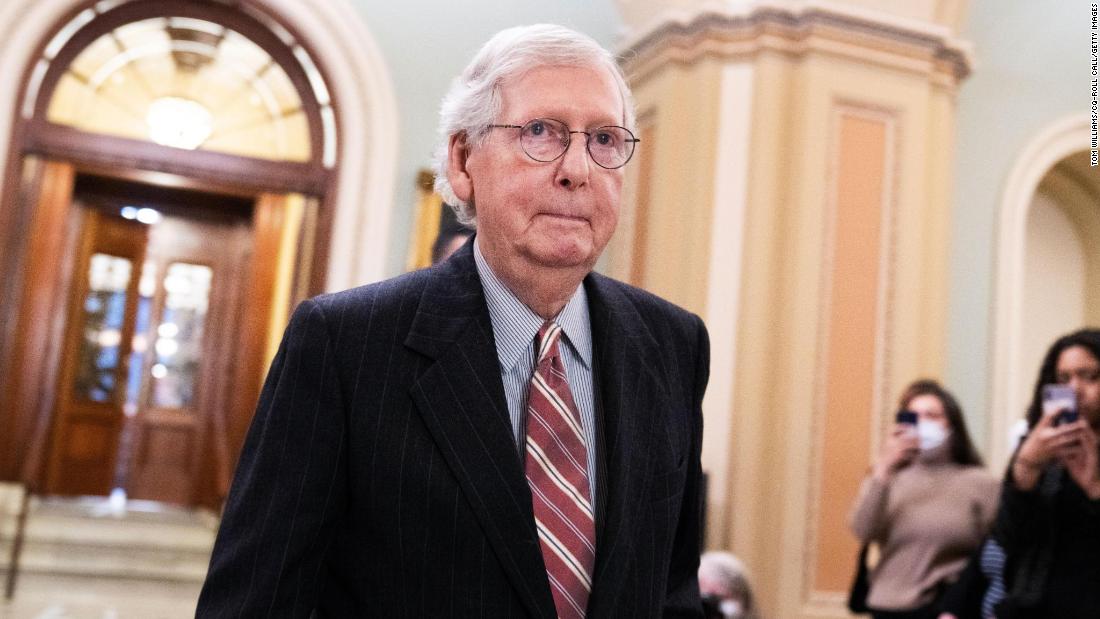 Asked during an appearance on Fox News Thursday night whether he would allow a Supreme Court nomination to go through if a vacancy opened up and Republicans were in the Senate majority next year, McConnell said this:

“I’m not gonna announce what our agenda might be on appointments before we even become the majority. I hope we’re in a position to make a decision.”

That came after an interview McConnell did with Axios’ Jonathan Swan Thursday morning, in which he declined to commit to holding hearings for a potential Supreme Court nominee if he became the Senate majority leader next year.

To be clear, what McConnell is saying is that he won’t pledge to consider a nominee to fill a Supreme Court opening in the final two years of President Joe Biden’s term. Which is a step beyond even where McConnell had previously drawn his line on high court nominations.

You’ll remember that McConnell, as Senate majority leader, refused to even grant Merrick Garland — President Barack Obama’s nominee to replace the late Antonin Scalia on the Court — a confirmation hearing or a meeting in 2016.

“The American people should have a voice in the selection of their next Supreme Court Justice,” McConnell said at the time. “Therefore, this vacancy should not be filled until we have a new president.”

That stance was considered remarkable given that Scalia had died in mid-February 2016, meaning that Obama had roughly 11 months left in his second term.

It was all the more remarkable because Obama had expressly picked Garland because of his record as a moderate jurist, in hopes that he might attract votes from Republicans too.

In announcing his selection of Garland, Obama nodded to this moderation. “I have selected a nominee who is widely recognized not only as one of America’s sharpest legal minds, but someone who brings to his work a spirit of decency modesty, integrity, evenhandedness and excellence,” Obama said in March 2016. “These qualities and his long commitment to public service have earned him the respect and admiration from leaders from both sides of the aisle.”

McConnell justified his move by citing what he described as the “Biden rule.” That was a reference to a 1992 Senate floor speech given by Biden in which he said “once the political season is under way, and it is, action on a Supreme Court nomination must be put off until after the election campaign is over.” It’s worth noting here that there were no Supreme Court vacancies at the time Biden delivered his remarks.

Make no mistake: McConnell, in refusing to say whether he would hold hearings for any potential Supreme Court nominee in 2023 — which is not an election year — is seeking to, again, move the goalposts of how and when the Senate will confirm justices.

If McConnell refuses to take up a nominee if an opening on the court arises, the message is simple: A president can ONLY hope their Supreme Court nominee receives a confirmation hearing and vote if and only if their party controls the Senate. Which is a massive break from past precedent.

If such a scenario were to come to pass, McConnell would almost certainly try to hang that new precedent on the ideology of the nominee.

“I’ll be interested in working with the president when he’s willing to be a moderate — but with regards to personnel, and the other things that we’re involved in, I’m not going to signal how we’re going to approach it,” McConnell told Axios.

But again, the Garland instance in instructive here. Garland had a long-built reputation as a moderate. That was, quite literally, why Obama picked him, knowing Garland would have to be confirmed by a Republican-controlled Senate. And yet, McConnell not only didn’t hold confirmation hearings for Garland but refused to even meet with him.

“I choose not to answer the question,” McConnell told Axios when pressed on whether he would hold a hearing on a Supreme Court nominee if Republicans held the majority in the Senate in 2023.

That answer — or lack thereof — tells you everything you need to know.