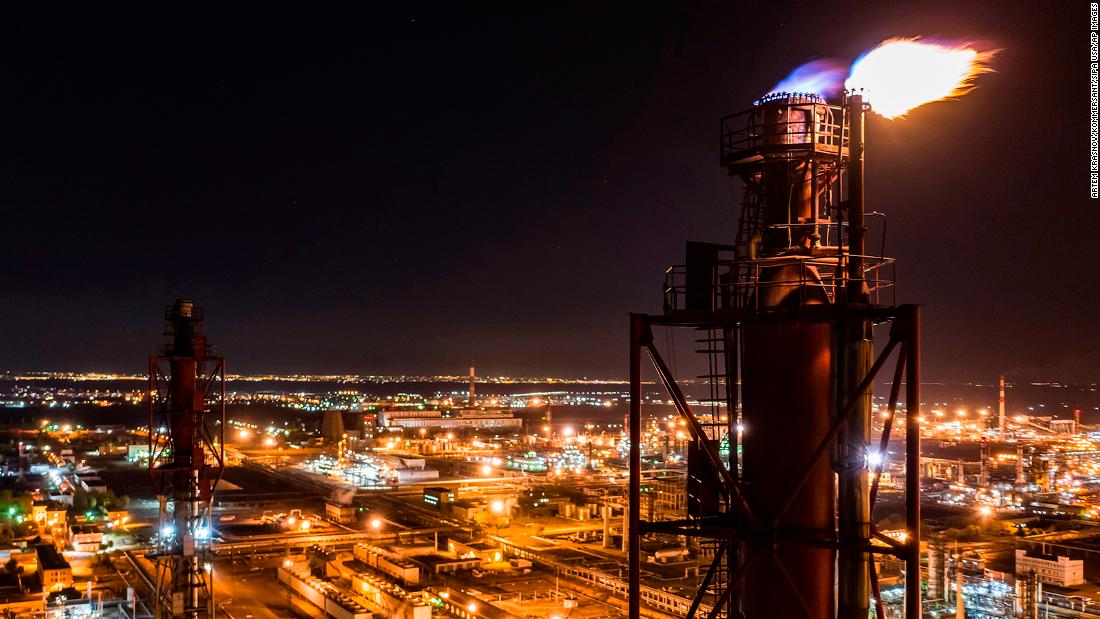 “I’m all for that. Ban it,” House Speaker Nancy Pelosi said this week.

A bipartisan bill, unveiled this week by Democratic Sen. Joe Manchin of West Virginia and Republican Lisa Murkowski of Alaska, would do just that.

Note that this is very different from the more sweeping step of imposing sanctions on Russian oil, a move that would prevent virtually all nations from using Russian oil.

Strictly banning US imports of Russian oil would most likely not have a dramatic impact on prices at US gas pumps, which surged this week to the highest level in nearly a decade.

That’s for a simple reason: Unlike Europe and Asia, the United States doesn’t really use much Russian oil.

Russia delivered just 90,000 barrels per day of crude oil into the United States in December, according to the most recent US government statistics.

Put another way, Russia represented less than 2% of all US oil imports in December, according to the US Energy Information Administration.

Some US refineries use unfinished Russian oil, blending it with other barrels to churn out gasoline, jet fuel, diesel and other products. But even by that broader measure, Russia is far from a huge player in the United States.

Russia exported just 405,000 barrels per day of crude oil and petroleum products into the United States in December. That represents less than 5% of total US crude oil and product imports.

US refiners can live without that Russian oil, if they have to. (And they may have to, soon enough).

“This buying by refiners is mostly opportunistic in nature and not out of necessity,” said Ryan Fitzmaurice, energy strategist at Rabobank.

That’s not to say there would be no impact at all. Banning Russian oil could create modest headaches for a few refiners and make the energy system overall less efficient as oil flows are rerouted to compensate.

“In short, a US ban on Russian oil imports would be mostly symbolic,” said Fitzmaurice.

Outright sanctions are a different story

Leveling sanctions directly on Russian oil would be a much bigger deal. That would prevent not just the United States, but also countries around the world, from using Russian oil without running afoul of sanctions.

The financial consequences could be massive. World supply was already failing to keep up with demand even before Russia’s invasion of Ukraine. Russia was the No. 2 oil producer on the planet last year, pumping more oil than Canada and Iraq combined.

US allies in Europe are heavily reliant on Russian oil to keep their economies humming.

“Russian oil is not crucial to the US. It’s crucial to Europe,” said Kloza. “I don’t know what Europe is going to do without Russian crude. If you take it away, Europe is really behind the eight ball.”

‘No way to offset’

The West has gone out of its way to avoid penalizing Russian oil directly, but uncertainty over sanctions has already caused a de facto ban on Russian oil. Many refiners, traders, shippers and banks don’t want to get anywhere near the stuff.
JPMorgan estimates more than 4 million barrels per day of Russian oil has been effectively sidelined, sending oil and gasoline prices skyrocketing.

The problem is that Russia is such a big player on the world stage that it would be difficult to replace all that oil in the short term.

A potential nuclear deal with Iran, which looks increasingly likely, would help. But even that would add only about 1 million barrels per day of oil onto a market that needs much more than that.

OPEC+, a group that includes Russia itself, is not coming to the rescue. The Saudi Arabia-led group has refused to open its spigots for months.

US oil companies are producing more oil, but only at a modest pace as they focus on returning cash to shareholders and deal with their own financial pressures.

“There’s no way to offset the loss of all of Russia’s exports without noticing it at the gas pump,” said Jason Bordoff, the founding director of Columbia University’s Center on Global Energy Policy. “That may be the price we’re willing to pay to tell Russia its actions are unacceptable.”