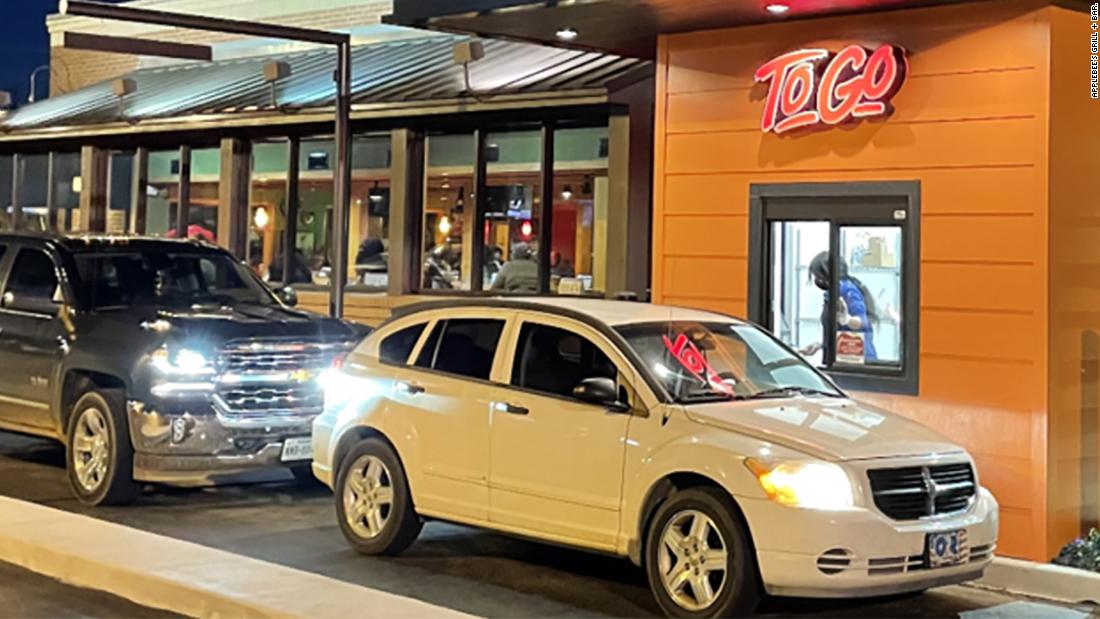 When local governments ordered restaurants to close their dining rooms, they had to quickly make their food available for delivery or pickup. For some restaurants, like pizzerias, that wasn’t such a big deal. But for others, like Applebee’s, it meant a drastic change in their operations — and a huge dip in sales, at least at first.

It’s also led to a seemingly permanent change in behavior. Prior to the pandemic, in the last three months of 2019, Applebee’s pickup and delivery orders accounted for about 12.8% of sales. In that same period two years later, even after its dining rooms re-opened, its off-premise sales spiked to about 27% of all sales.

That jump meant Applebee’s suddenly had a different and significant stream of revenue –— but one that’s not necessarily as attractive as dine-in, where customes can splurge on high-margin items like mixed drinks.
So Applebee’s has been getting creative with its off-premise options. It launched, for example, a virtual brand called Cosmic Wings during the pandemic. And last year, it tried something new — its first-ever drive-thru window.
The drive-thru at Applebee’s is far less complex than one you might find at a McDonald’s (MCD) or Burger King. An Applebee’s customer shouldn’t expect an outdoor menu board or to be able to place an order with an employee. Instead, they have to order ahead — online or through the restaurant’s app — and use the window just for pickup.

Ten years ago, someone looking for a to-go meal wouldn’t even think of Applebee’s, said John Cywinski, the brand’s president. At the time, “Applebee’s was not really part of that consideration set,” Cywinski said during an investor day in March. “If you didn’t have 1.5 hours to dine-in and you were on the go … you’re probably thinking about McDonald’s, Wendy’s and Burger King, and maybe a burger, fries and a Pepsi through a drive-thru window.”

But now, he said, “we are competing directly with [quick-service restaurants] and fast casual.”

That means exploring new concepts, including drive-thru, an idea championed by a franchise operator.

It’s early days for now: Just two restaurants have the windows, one in Texarkana, Texas and another in Monroe, Louisiana. The company expects two more to open in West Columbia, South Carolina, and Colonial Heights, Virginia, in coming weeks. By the end of this year, Cywinski expects there could be about 15 Applebee’s restaurants with drive-thru windows.

That’s still a small number, considering that there are about 1,600 Applebee’s restaurants overall. But it should be a big enough sample size to figure out if it makes sense to install a drive-thru window at more restaurants, Cywinski said.

Though he isn’t ready to say how many Applebee’s will ultimately have drive-thru windows, he has high hopes.

“We think there’s a really strong argument for it,” Cywinski told CNN Business, adding “we will scale it, should the business case be clear. My instinct says yes, there’s a genuine need.”

What does it take to build a drive-thru?

It may seem relatively simple to set up these kinds of drive-thru windows. But it requires some logistical maneuvering, Cywinski told CNN Business. “It’s really going to be contingent on the site and the municipality,” he said.

Opening up a drive-thru window at Applebee’s means getting rid of a few spots in the restaurant parking lot to add another lane. It also requires some construction to make the window itself.

At some locations, that’s no big deal.

“There’s some Applebee’s parking lots where …. it’s easy,” he said. “And you’re working with a village or municipality who is fully supportive.”

But, he noted, “there are others where you just don’t have the space, or the throughput logistics aren’t right.” Most Applebee’s locations are operated by franchisees, so they also have to be on board with the changes.

Cywinski thinks that the drive-thru windows also would be helpful for delivery drivers, who can pick orders up that way. And more to-go options could also help Applebee’s should customers sour on delivery.

Delivery is typically unappealing to restaurants. It’s expensive, because restaurants have to pay third-party providers or hire a fleet of delivery drivers themselves. And it cuts into profits, because customers are less likely to order high-margin items, like alcoholic beverages, when they order delivery.

And so far, customers have largely accepted these higher prices as the cost of convenience. But with inflation soaring, they could turn on delivery — and decide that to-go is better.

“The intent is just to make the experience easy for the guests,” Cywinski said.