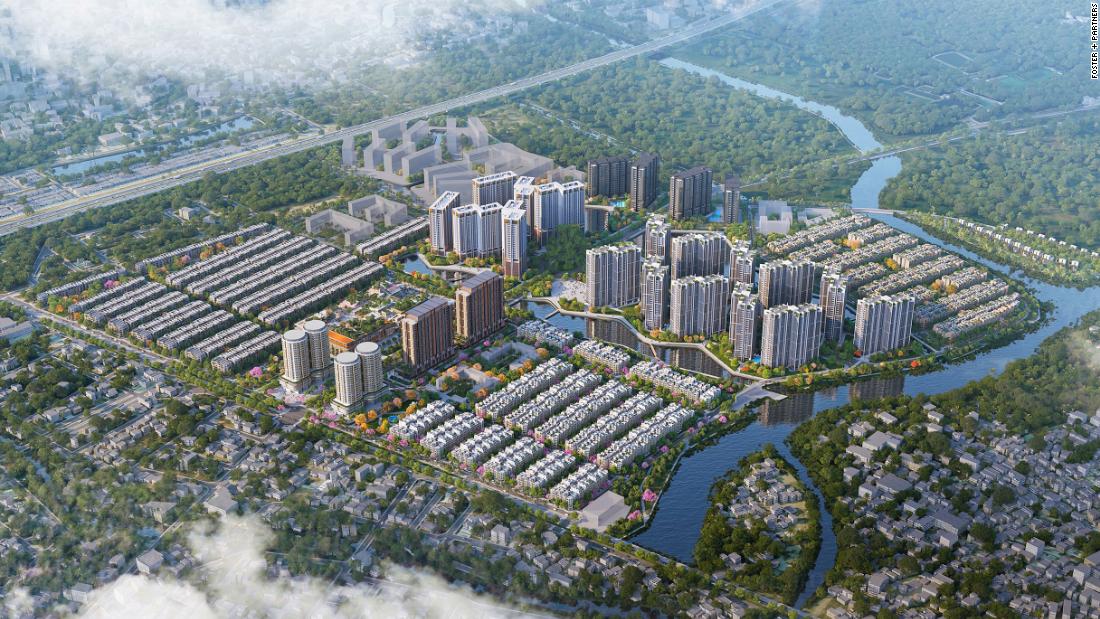 One of the UK’s largest architecture firms has unveiled plans for a verdant new “city within a city” in Vietnam.

The new 290-acre (about half a square mile) district will be built around a long “spine” of trees and greenery in the country’s biggest metropolis, Ho Chi Minh City, according to architects Foster + Partners.

Called “The Global City,” the project includes high- and low-rise residential buildings, public housing and villas, in addition to schools, a shopping mall and medical facilities. Flanked by two waterways, the community will comprise five different neighborhoods connected by a central park and boulevard, as well as a series of pedestrian bridges.

According to Toby Blunt, a senior partner at Foster + Partners, the firm inherited the overall masterplan but was tasked with enhancing “its integration to nature, while increasing pedestrian connectivity between the different neighborhoods,” he wrote via email.

The project is set to complete within four years, according to Masterise Homes, a property firm also working on the district.

In a press release, Foster + Partners’ studio head Gerard Evenden emphasized the number of green spaces in the plan, including parks, courtyards and gardens. “The design seeks to strike a balance between biodiversity and human well being,” he said, calling it “a holistic, sustainable masterplan for the future.”

The district’s design references the architectural traditions of Ho Chi Minh City, formerly known as Saigon, through the use of brick and timber, according to the press release. The southeastern city is known for its wide mix of styles, from French colonial landmarks like the Saigon Opera House, to concrete modernist apartment blocks and contemporary additions to the skyline, like the lotus flower-inspired Bitexco Tower.

Foster + Partners, which was founded by celebrated British architect Norman Foster, is known for eye-catching projects including the Hearst Tower in New York and 30 St Mary Axe, known as “The Gherkin,” in London.

“The Global City” is one of several futuristic masterplans that the firm has developed in recent years, with its team currently working on various planning projects designed to revitalize urban areas or create new sustainable communities in densely populated cities. Foster + Partner’s proposed overhaul of Stockholm’s central Slussen district is set to complete by 2025, while the sprawling South Sabah Al-Ahmad, a new city that will house an estimated 280,000 residents in Kuwait, is scheduled to open in 2040.

The architects are also working on another project in Vietnam: the two-tower VietinBank Business Center just outside of Hanoi, in the country’s north.

Top image: A digital rendering of “The Global City.”