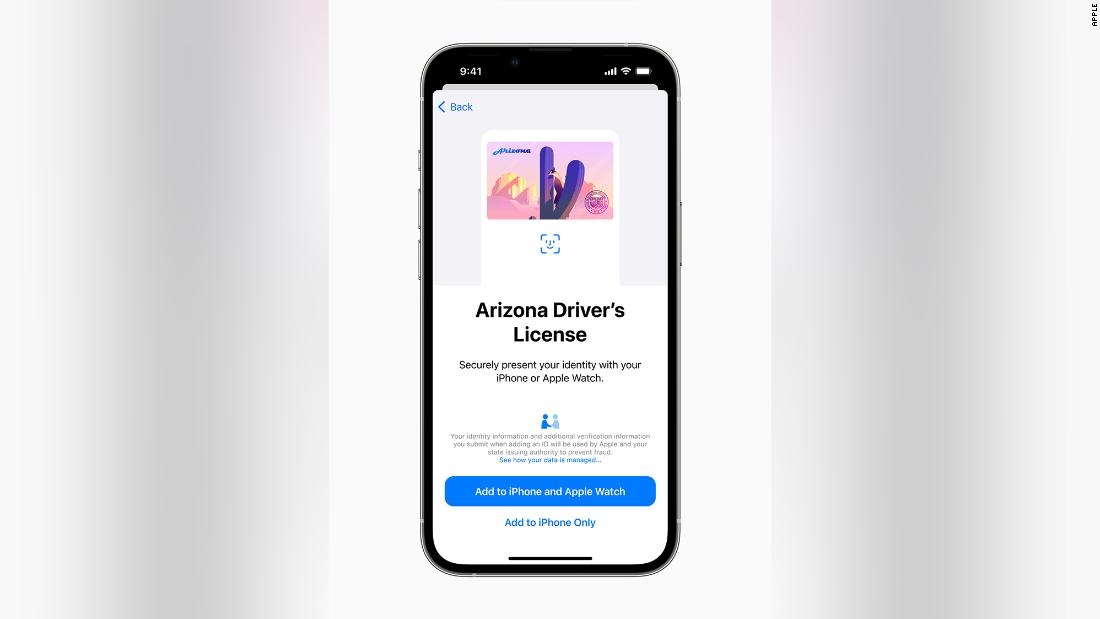 Starting Wednesday, Arizona residents with TSA PreCheck can present their digital driver’s license or state ID by tapping their iPhone or Apple Watch at select Transportation Security Administration checkpoints in Phoenix Sky Harbor International Airport. However, they’ll still need their physical IDs to fly home if traveling to a state that’s not in the Apple program — in other words, any other state in the country.

iPhone users will also still need to show their physical ID to, for example, enter a bar, get documents notarized or show law enforcement at traffic stops, both in other states and in Arizona. Apple said it is exploring more ways for people to use digital verification in the future.

Last year, Apple (AAPL) teased it was working with several states on the initiative, including Georgia, Connecticut, Iowa, Kentucky, Maryland, Oklahoma and Utah. Apple originally noted on its website that the feature would launch last year, but the company told CNN Business it was a complicated process to implement and it’s been working closely with the states to make this available as soon as possible.
On Wednesday, Apple announced plans to also introduce the feature to Colorado, Hawaii, Mississippi, Ohio and Puerto Rico.

The rollout is part of Apple’s ongoing effort to boost support for its digital wallet. Apple already offers features such as digital credit cards, movie tickets, car keys, boarding passes and gift cards. These features offer the promise of an added layer of convenience, push iOS users deeper into its ecosystem of services, and make the iPhone even more central to our lives.

To ensure the ID is official, the user will have to take a selfie after scanning and uploading a picture of their driver’s license or state ID card. The user will also be required to complete facial and head movements, similar to how Face ID is activated. The upload will be “securely provided” to the state for verification, according to Apple.

Once activated and approved, users can tap their iPhone or Apple Watch on the identity reader at the security checkpoint and the agent will see the information required to fly. It works similarly to how people use the Wallet to make purchases at card readers.

Apple previously said information on the IDs is “encrypted and protected against tampering and theft.” Biometric authentication is also used to ensure the proper person is using the phone or watch.

On their iPhone or Apple Watch, users will be shown which specific information is requested by the TSA. The user can agree to provide that information with Face ID or Touch ID, without having to unlock their iPhone. All information is shared digitally, so users do not need to show or hand over their device to present their ID.