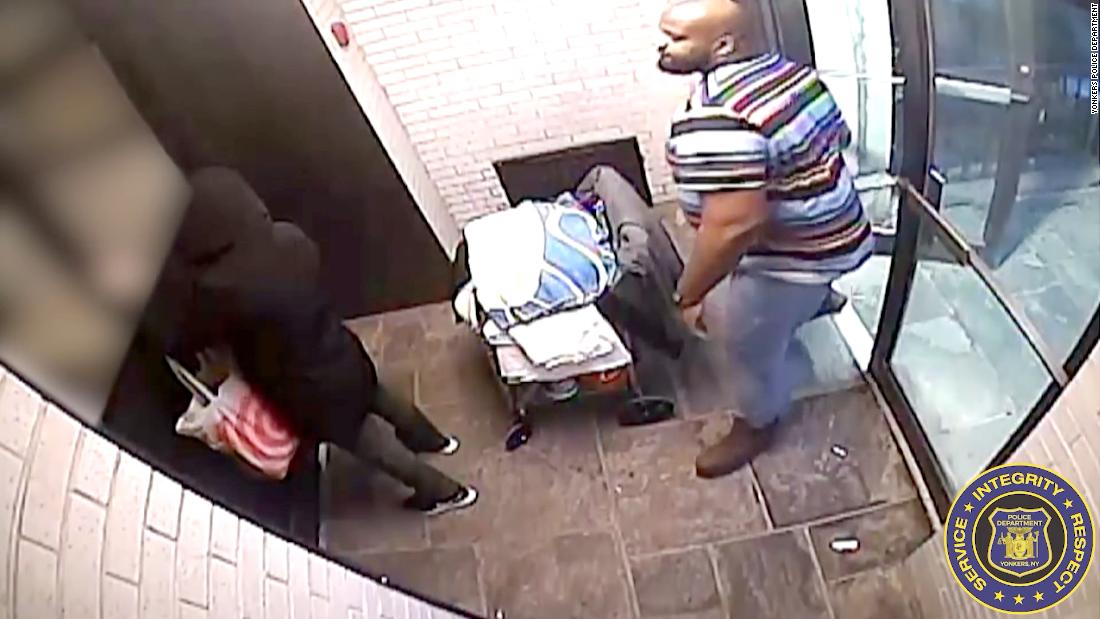 The victim, a 67-year-old Asian woman, was returning home Friday evening when she saw the suspect, whom police identified as Tammel Esco, 42, in front of her building. Esco allegedly used the racial slur as she passed him, police said in the release.

The victim ignored Esco and entered the vestibule of her apartment building, according to the police. But as she attempted to open the second door to enter the lobby, Esco allegedly approached her from behind and punched her in the head, knocking her to the floor, the release said.

The department provided surveillance a video of the assault.

In it, a man is seen punching a woman in both the head and face more than 125 times and then stomping her with his foot seven times. Police said he then spat on her.

The woman suffered multiple contusions and lacerations to her head and face, facial bone fractures, and bleeding on the brain, according to the news release. She was taken to a trauma center and is listed in stable condition, according to police.

Police responded to the scene at around 6:11 p.m. Friday, found Esco outside the apartment building and placed him into custody without incident, according to the release.

He was arraigned in a Yonkers City Court on Saturday and held in custody at Westchester County Jail, the release said.

Esco is charged with two felonies — attempted murder and assault in the second degree involving a victim 65 or older — online court records show.

Each count is charged as a hate crime, according to the release.

His next court date is slated for March 25.

CNN reached out to the Legal Aid Society of Westchester County, which represents Esco, for comment but hasn’t received a reply.

Yonkers Mayor Mike Spano said in the release he expects the suspect to be charged to the fullest extent possible for his “heinous actions.”

“Hate crimes are beyond intolerable in our city,” the mayor said.

Yonkers is a city of more than 211,000 people in the New York City suburbs, about 17 miles north of Manhattan.

“This is one of the most appalling attacks I have ever seen; to beat a helpless woman is despicable and targeting her because of her race makes it more so,” Yonkers Police Commissioner John J. Mueller said in the release. “This defendant must be held to the maximum punishment allowed by law to send a clear message that hateful, violent behavior will not be tolerated in our communities.”

Since the start of the Covid-19 pandemic, thousands of people in the US have been victims of anti-Asian incidents, from verbal abuse to physical attacks.
From March 19, 2020, to December 31, 2021, a total of 10,905 hate incidents against Asian American and Pacific Islander people were reported to Stop AAPI Hate, an organization that tracks reports of racism and discrimination against Asian Americans and Pacific Islanders.