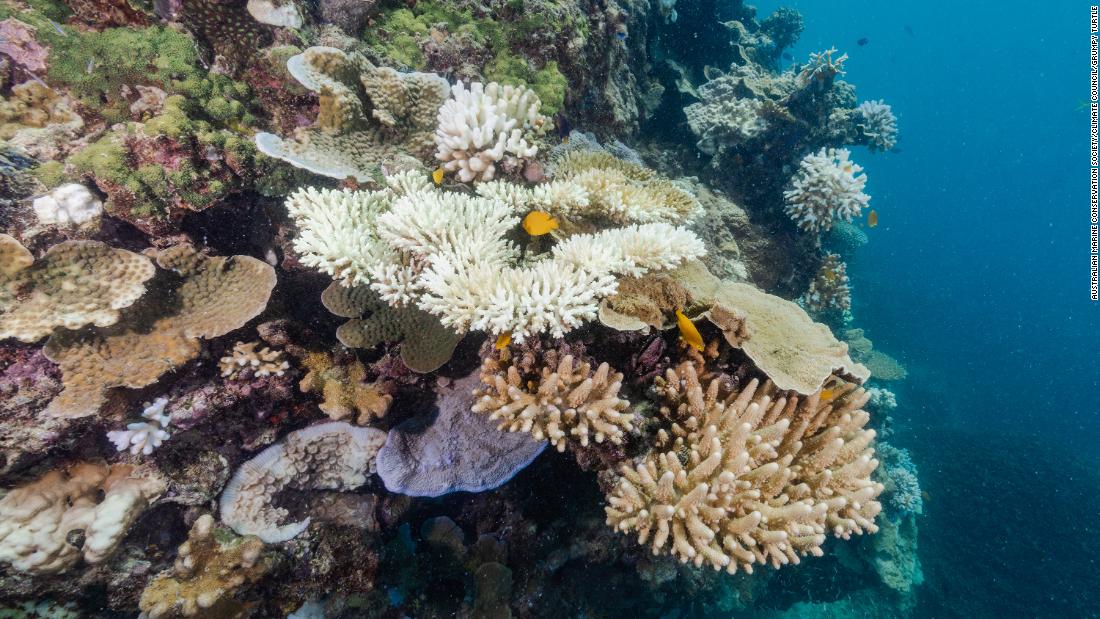 The Great Barrier Reef Marine Park Authority (GBRMPA) and Australian Institute of Marine Science (AIMS) said Friday that aerial surveys of around 750 reefs show widespread bleaching across the reef, with the most severe bleaching observed in northern and central areas.

“More than half of the living coral cover that we can see from the air is severely bleached completely white and can have signs of fluorescence in the colors of pink, yellow and blue,” said AIMS coral biologist Neal Cantin.

“The corals are producing these fluorescent pigments in an attempt to protect their tissue from heat and from the intense sun during these marine heatwaves.”

It’s the fourth mass bleaching in six years and the first since 2020, when about one quarter of the reef surveyed showed signs of severe bleaching. That event came just three years after back-to-back bleaching events in 2016 and 2017. Previous bleaching occurred in 1998 and 2002.

David Wachenfeld, chief scientist at the GBRMPA, said the coral was stressed but not dead.

“If the water temperature decreases, bleached corals can recover from this stress. It is important to remember that we had a mass bleaching event in 2020, but there was very low coral mortality,” Wachenfeld said.

Australia’s Great Barrier Reef stretches 1,400 miles (2,300 kilometers) down the Queensland coast. Before the pandemic forced borders to close, it attracted around three million tourists each year.

This year aerial surveys with helicopters and fixed-wing aircraft showed the worst of the bleaching is near Townsville. Tourist areas near Cairns and Port Douglas have been less affected due to lower levels of heat stress.

Bleaching occurs when stressed coral ejects algae from within its tissue, depriving it of a food source. If conditions don’t improve, coral can starve and die, turning white as its carbonate skeleton is exposed.

“Even the most robust corals require nearly a decade to recover,” said Jodie Rummer, associate professor of Marine Biology at James Cook University in Townsville.

“So we’re really losing that window of recovery. We’re getting back-to-back bleaching events, back-to-back heat waves. And, and the corals just aren’t adapting to these new conditions,” she said.

The Australian government has been under pressure from UNESCO to prove that it’s doing enough to save the reef.

While the extra funding was welcomed, the government has been called out by global climate experts, among others, for not doing enough to transition Australia away from fossil fuels.

The Climate Action Tracker gives the country a “highly insufficient rating” for its action on climate change. “The government appears intent on replacing fossil fuels with fossil fuels,” it says, citing the government’s “gas-led recovery” program, announced in 2020 to lead the country out an economic downturn related to the spread of Covid-19.

On Monday, United Nations Chief Antonio Guterres name-checked Australia among a “handful of holdouts” in the group of G20 countries who had not announced “meaningful emissions reductions.”

He said countries and private businesses who invest in coal are costing the world its climate targets. And he said money spent on fossil fuels and subsidies was “a stupid investment leading to billions in stranded assets.”

“It’s time to end fossil fuel subsidies and stop the expansion of oil and gas exploration,” he said.

Amanda McKenzie, CEO of the Climate Council, said the real issue the government should be addressing is climate change.

“To give our reef a fighting chance, we must deal with the number one problem: climate change. No amount of funding will stop these bleaching events unless we drive down our emissions this decade,” she said in a statement.