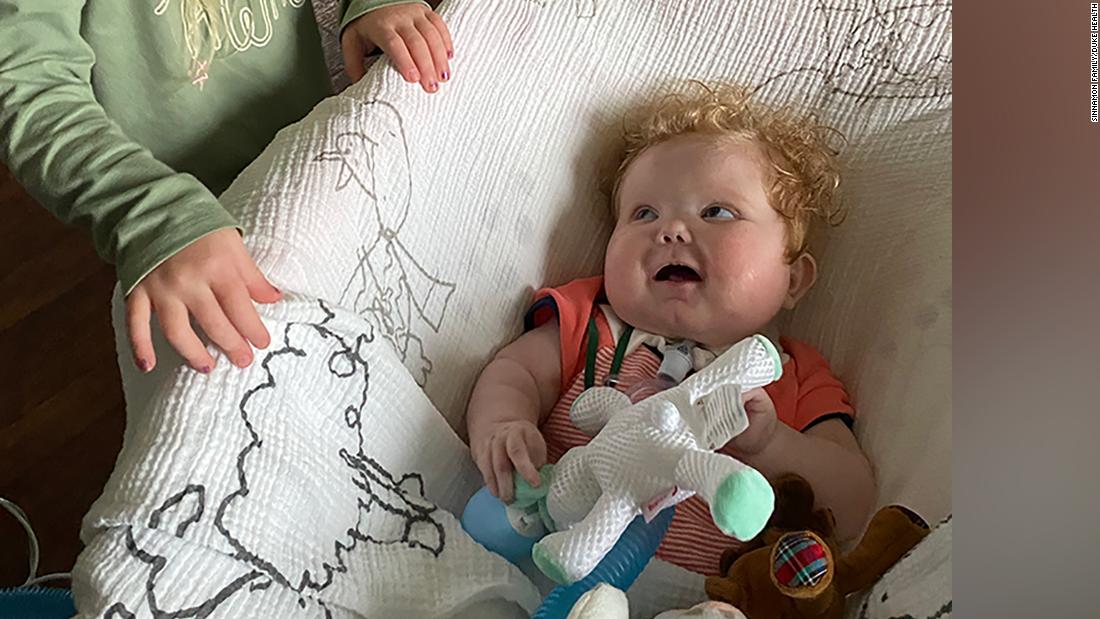 Easton Sinnamon was born at Duke University Hospital with single ventricle heart disease, which meant his heart had only one ventricle, instead of two, to pump blood to the rest of his body.

After two heart surgeries couldn’t correct a leaking heart valve related to his congenital heart disease, it became clear to his surgical team that Easton would need a new heart. But the transplant would require Easton to be on immune-suppressing medications for the rest of his life so his body wouldn’t reject the new organ.

These medications can increase the risk of cancer and be toxic to the kidneys, as well as making patients more susceptible to severe infections.

But doctors ran into another challenge while Easton awaited a heart transplant. After repeated infections, further testing revealed that he had a deficiency in a specific type of immune system cell called the T cell. T cells mature in the thymus, an organ that sits in front of the heart.

Easton’s poor immune function meant his body did not naturally make T cells, which are also often responsible for the body rejecting and attacking a transplanted organ when it doesn’t recognize it.

“It was serendipitous in the sense that Easton needed both a heart transplant and he also had very poor immune function,” said Dr. Joseph Turek, chief of pediatric cardiac surgery at Duke University and a member of Easton’s surgical team, in a news conference Monday.

This made Easton a candidate for a novel surgery to receive both a new heart and a processed thymus from the same donor. This combination of procedures had never been done on a human.

For Easton’s parents, Kaitlyn and Brandon Sinnamon, the decision to have their baby undergo such critical procedures wasn’t an easy one, especially given the risks that come with transplant surgery. When Easton’s second surgery failed, Turek discussed the options with the Sinnamons.

“I think one thing that stuck with us the most is, he told us, ‘I want to give you your son back, and the only way I can do that is through transplant,’ ” Kaitlyn Sinnamon told CNN. ” ‘If it works, not only is that going to help Easton, but it’s going to help millions of other people, as well. And on top of that, we get to make a huge difference. And if it doesn’t work, we at least tried it.’ “

According to Turek, Duke University is the only place in the Western Hemisphere that does cultured thymus transplants, in which donor thymus cells are incubated and grown in a lab before being implanted in the recipient.

“It’s the idea that the thymus is growing up in the same environment as the new transplanted organ is what allows it to recognize it as ‘self.’ If you just use the thymus and didn’t culture it, you already have cells that would start to reject,” Turek told CNN.

Easton’s immune deficiency meant he might be able to develop one aspect of his immune system — T cells — while his body grew accustomed to his new heart. This double transplant from the same donor could even eliminate the need for dangerous lifelong immune-suppressing medication.

In August, at 6 months old, Easton got his heart transplant and was started on immune-suppressing medication. Two weeks later, after the donor thymus cells had completed the culture process, he also received the thymus implantation.

“It’s bittersweet to be excited about your child getting a transplant because you get to bring your child home, but someone else is losing theirs,” Sinnamon said.

Shortly after his surgery, Easton was moved out of the intensive care unit, which indicated to his parents that he was recovering well.

Six months post-transplant, testing demonstrated that Easton’s new thymus was properly developing T cells and that his body had not rejected his new heart. These results are promising, and Easton’s medical team hopes to wean him off his immune-suppressing medication in a year if tests confirm that his T cells recognize his transplanted heart as his own.

“The idea that you could have a transplant and not have to be on these medications is really a … game-changer for patients with transplanted organs,” Turek told CNN.

Turek also said that the success of this procedure could mean the transplanted heart can live longer.

Currently, transplanted hearts usually survive only 10 to 15 years because of small episodes of rejection in the years after the procedure. Typically, these episodes can be treated by raising the dosage of immune-suppressing medication, but they can ruin the integrity of the heart over time. So building an immune system that is tolerant to a heart transplant could increase the durability of that heart.

Turek sees this as opening the door to the future of transplant medicine. The next step is to test whether this procedure could be successful in someone with a healthy immune system who needs an organ transplant.

“I think if that happens, this will be the way that most transplants are done in the future, and that’ll be across all organs,” Turek told CNN.

However, T cells make up only one part of the immune system’s response to transplanted organs, noted Dr. Reshma Biniwale, associate professor of cardiac surgery and director of pediatric heart transplantation at UCLA.

“I would be very hesitant to say that the child will be completely off all immune suppression, because this technique only takes care of the T cells, of the thymic cells,” said Biniwale, who was not involved in Easton’s surgery. “Immunity is also mediated by antibodies by the humoral cells, which require a completely different mechanism of immune suppression.”

B cells, also known as humoral cells, are a type of immune cell that make antibodies and are made in the bone marrow.

“This may be a great solution in the short-term, but it does not provide a lifelong solution,” Biniwale told CNN.

It’s still unclear whether this procedure would be viable in an adult patient, according to Turek, because the thymus shrinks as people age and bone marrow becomes responsible for making T cells.

“That’s one of the things we’re looking at in the laboratory, as well as to find out what is our suitable donor age. We believe it’s probably going to be somewhere in early adulthood to where you would still have a viable thymus for transplant purposes,” Turek said.

There is even the potential for cultured thymus transplants to accompany xenotransplants, which is when animal organs are transplanted into humans.

A man who was the first to receive a genetically modified pig heart transplant died Tuesday, two months after his surgery. Turek says a cultured thymus transplant might remove the need for high doses of the immune-suppressing medication that the man needed.

Seven months after his own surgeries, Easton celebrated his first birthday and “is thriving at home,” according to Sinnamon.

“When we brought him home, he couldn’t even hold his head up. We had to carry him around like a newborn baby, and now he’s walking around the house and laughing and playing with his sister on the floor,” she said. “If you looked at him now, you would have no idea that he went through everything that he went through.”