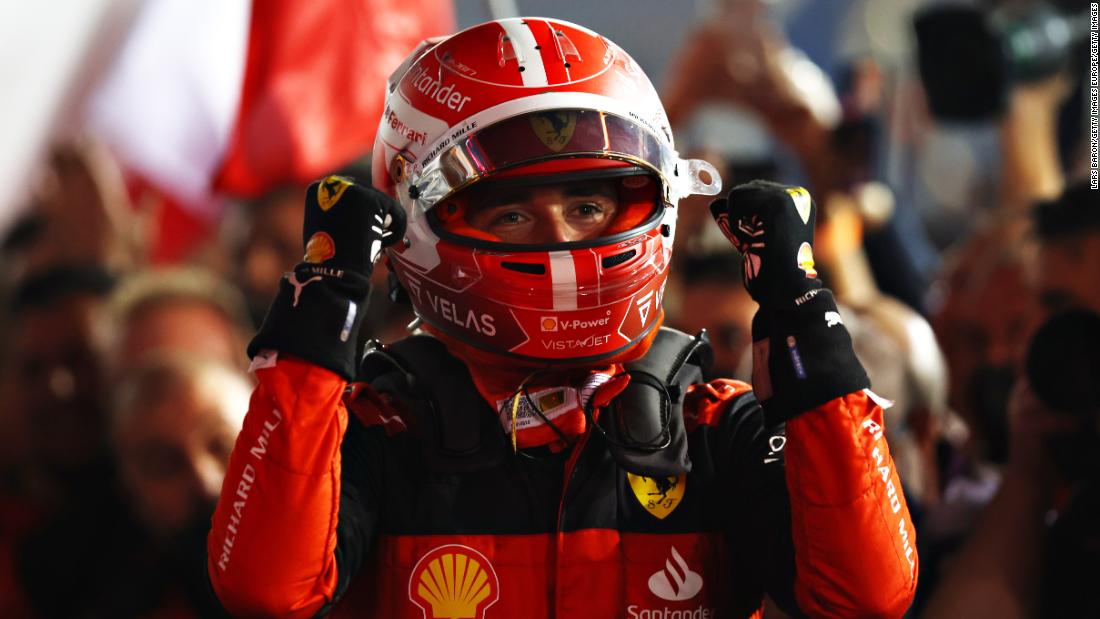 Leclerc had started in pole position after an impressive qualifying and, after a battle with reigning world champion Max Verstappen, looked to be cruising to victory.

That was until a safety car was deployed in the closing stages which saw the pack bunch up for the restart.

As per the new regulations, all cars were able to unlap themselves before racing started again — a rule clarified after the dramatic ending in last year’s Abu Dhabi Grand Prix which saw Lewis Hamilton lose the title on the final lap.

In Bahrain, Leclerc held on to the lead after the restart with Verstappen hot on his tail but the Red Bull driver — who was already complaining about a steering issue with his car — dropped out of the race entirely after appearing to lose power.

The Dutchman was furious and could be heard berating his team over the radio as Ferrari’s Carlos Sainz overtook him into second.

It went from bad to worse for Red Bull as moments later the team’s other driver Sergio Perez — who was in third — also began struggling with his car, allowing Hamilton to claim an unlikely podium position on the final lap.

It was a huge result for Mercedes with the team still struggling to perfect the car — its other driver George Russell finished fourth.

But for Ferrari, who hadn’t won a race since September 2019, the season could not have got off to a better start.

“I’m so happy. We knew this was a big opportunity for the team and the guys have done an incredible job building this amazing car,” Leclerc said.

“A one-two today with Carlos — we couldn’t hope for better. It’s incredible to be back at the top.”

Not since 1983 has F1 introduced such sweeping changes to the design of the cars.

It was hoped the new regulations would make overtaking easier and it certainly seemed the case with Leclerc and Verstappen trading places five times in just two laps in the early stages.

But it was the safety car that yet again that caused the most drama — only this time it was Hamilton who profited over Red Bull.

It comes as the Federation Internationale De l’Automobile (FIA) revealed that the controversial season finale at the 2021 Abu Dhabi Grand Prix was the result of a “human error” by then-racing director Michael Masi.

On Saturday, the report of the investigation was submitted to the FIA’s World Motor Sport Council, which concluded that the results of the title decider are “valid, final and cannot now be changed.”

Hamilton had all but won his record-breaking eighth world title over the eventual winner Verstappen, when Williams Racing driver Nicholas Latifi crashed into the barriers with four laps remaining, resulting in the safety car being called out.

The controversy reached its peak when a message from the race director initially said lapped cars between Hamilton and Verstappen would not be allowed to unlap themselves — only for Masi to appear to change his mind moments later — leaving the Red Bull driver right behind Hamilton with fresh tires and just one lap to go.

Masi’s decision meant the race would restart in the final lap, with Verstappen allowed to start almost side-by-side Hamilton, despite the Brit having established a healthy lead.

The FIA’s investigation said Masi was acting in good faith; however, he was removed as F1 race director in February.