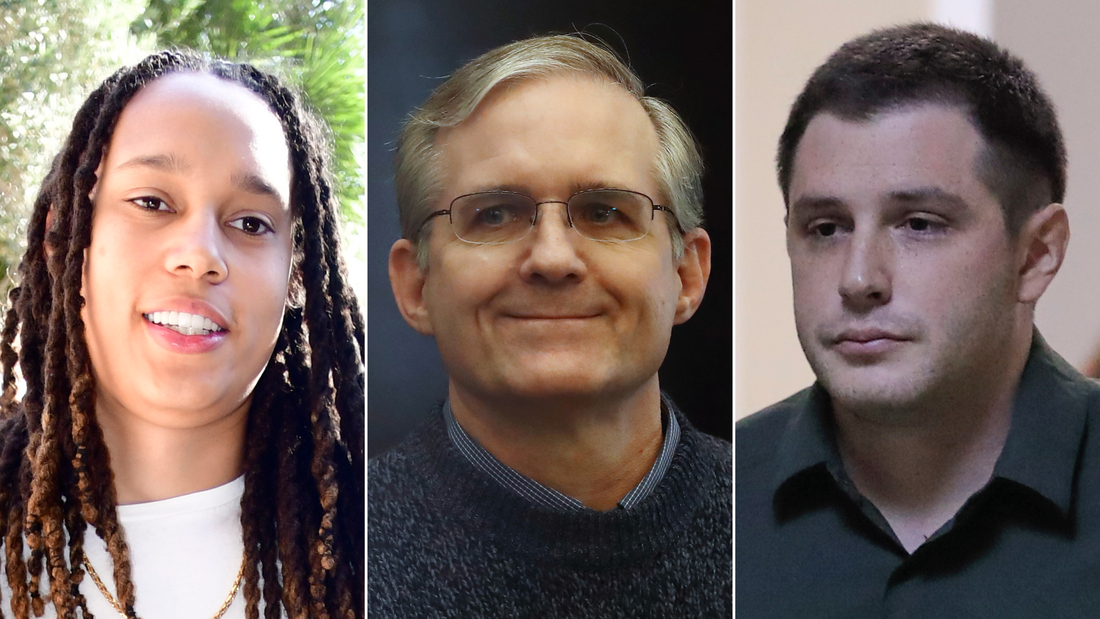 Russia’s invasion of Ukraine brought forth global condemnation from governments and peoples alike, who have since boycotted Russian goods, frozen Russian access to banking systems and sanctioned billionaires close to Russian President Vladimir Putin. And amid the growing economic repercussions, families and supporters of Griner and other detained Americans, like Trevor Reed and Paul Whelan, are working to free their loved ones as diplomatic channels fade.
Russian authorities said Griner had cannabis oil in her luggage while in a Moscow airport last month and accused her of smuggling significant amounts of a narcotic substance — an offense punishable by up to 10 years in prison.

Reed and Whelan were arrested and convicted for alleged crimes well before the Russian incursion of Ukraine, and the pair remain in prison serving extended sentences denounced by US officials as unfair.

Here’s what we know so far about their detentions.

Griner’s whereabouts have not been shared by authorities

Griner, a two-time Olympic basketball gold medalist, is a star player in both the US and Russia and has been a regular centerpiece in the successes of her teams, the WNBA’s Phoenix Mercury and Russian club UMMC Ekaterinburg.
Many details of her detention in Moscow remain in question, including the exact date of the arrest and her current location.
Those close to Griner have expressed their frustration over the detention and lack of clarity provided by Russian authorities. In an Instagram post, Griner’s wife, Cherelle, described the agony of waiting.

“There are no words to express this pain. I’m hurting, we’re hurting,” she said.

The Biden administration is working on getting Griner out of Russia, members of the Congressional Black Caucus said after meeting with President Joe Biden Monday.

Rep. Sheila Jackson Lee, who represents Griner’s hometown of Houston, said in a statement she spoke of Griner during the meeting and noted there is a “need for her to be immediately released and for her to receive the help of the United States to demand and facilitate that release.”

But a US representative cautioned to CNN on Monday that getting her home is “going to be very difficult.”

“Our diplomatic relationships with Russia are nonexistent at the moment,” Rep. John Garamendi, a member of the House Armed Services Committee, said.

Reed, a former US Marine detained in Russia since 2019, was sentenced to nine years in prison in July 2020 for endangering the “life and health” of Russian police officers after a night of drinking, according to state-run news agency TASS.

Russian authorities claimed Reed resisted arrest and attacked officers as they responded to complaints of a disturbance, according to Russian state-run news agency RIA-Novosti.

Alina Tsybulnik, Reed’s girlfriend who was with him that night, heavily disputed police allegations, telling TASS, “(The police) constantly change their story … in my opinion, Reed was too drunk to resist them.”

Reed and his family have denied the charges and US Ambassador to Russia John Sullivan called the trial “theater of the absurd” after the 2020 sentencing.

Joey and Paula Reed, Trevor’s parents, spoke with Biden Tuesday shortly after waving at the President’s passing motorcade in Fort Worth, Texas, the family said.

An attempt to set up a meeting with Biden ahead of the visit was declined, the family said, but Biden later spoke with them via phone.

“I just can’t imagine what you’re going through,” Biden could be heard saying on the cell phone’s speaker by a CNN producer and other reporters at the scene. “I don’t want you to think that it’s not something I constantly think about.”

The Reeds grew emotional and stepped away from reporters for the remainder of the conversation with the President, but Paula Reed later shared details of the call, including that Biden told them he “thinks of Trevor every day and that he feels horrible that he hasn’t been able to bring Trevor home yet. And he said, ‘We’re not going to stop.'”

Trevor Reed has said in recent weeks that he is coughing up blood, and his family is concerned he has tuberculosis. Joey Reed said he spoke with his son as recently as Monday and asked Trevor if he wanted to pass along a message to Biden.

“He said, ‘I don’t have anything to say to the President. I think that they have forgotten about me,'” Reed said. “We have not (forgotten about him). We love our son and we’re going to fight to our dying day to bring him home.”

Paul Whelan, a US, Irish, British and Canadian citizen and former US Marine, was detained at a Moscow hotel in 2018 and arrested on espionage charges, which he has consistently denied. He was convicted and sentenced in June 2020 to 16 years in prison in a trial widely denounced as unfair by US officials.
In a call with CNN in June, Whelan described the grim conditions of the remote labor camp where he spends his days working in a clothing factory that he called a “sweatshop,” and said, “getting medical care here is very difficult.”

Whelan was getting through his plight “day by day,” he told CNN, and was trying to keep “a positive mental attitude” about the situation.

His family said Whelan has been the subject of retaliation, including serving time in solitary confinement where he was not permitted to shower or exercise.
Whelan’s siblings have spent the past three years staying in contact with him and advocating on his behalf to lawmakers in Washington, DC, and his sister, Elizabeth Whelan, lauded American officials in Moscow for their work. But the latest strain in relations between the two nations is likely to complicate efforts.

“An unfortunate component about advocating for someone who is wrongfully detained is you have to make your presence known. There’s always a crisis going on, and you have to keep reminding people that there is an American who is being held by a hostile foreign nation, often one that we have relations with of some sort, and that this situation has to end,” Elizabeth Whelan told CNN in December.

She praised her brother’s perseverance, adding that he “is bound and determined to survive this situation, and he is not going to give in to the Russians. He is not going to show weakness.”