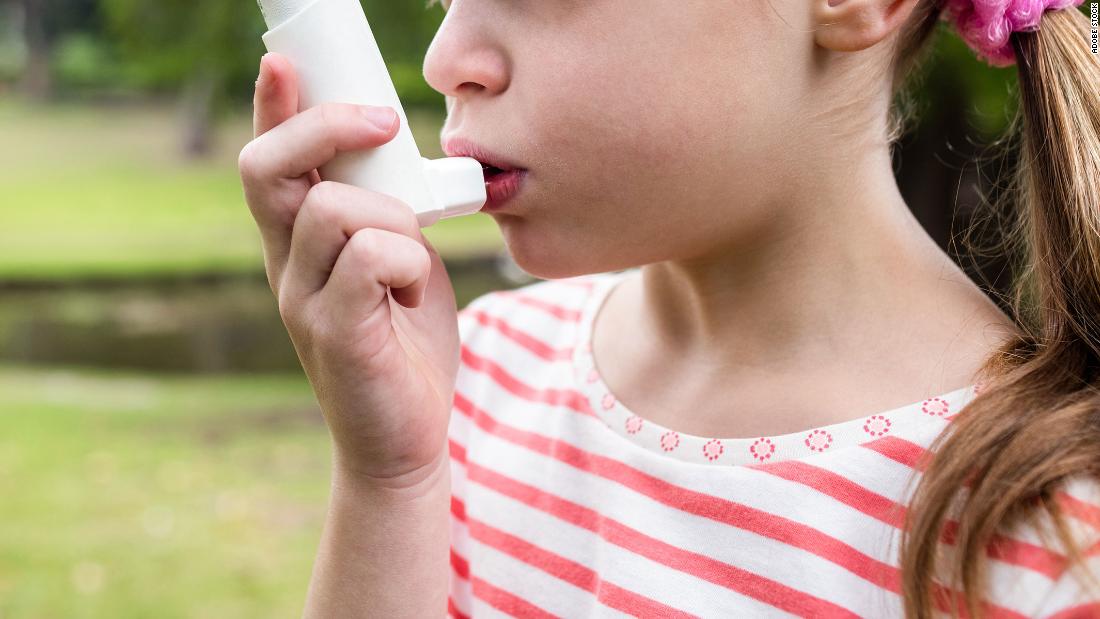 “We believe that the effect may be due to the fact that bisphenols can cross the placental barrier and interfere with the child’s respiratory and immune systems during the developmental phase,” said first author Alicia Abellán, a postdoctoral researcher at Barcelona Institute for Global Health, in a statement.

There was a significant association between levels of BPA in mothers’ urine and asthma and wheezing for girls, but not boys, according to the the study published Friday in the journal Environment International.

There could be several possible explanations for that finding, said study author Dr. Leonardo Trasande, director of environmental pediatrics at NYU Langone Health.

“When a baby is growing in utero, the lung buds are shaped by a host of factors of which sex hormones are one, so if there’s an imbalance of sex hormones induced, for example, by an exogenous estrogen like BPA, that could be part of the story,” Trasande explained.

“BPA also contributes to inflammation and disrupts immune function. So there’s a number of patterns that could fit the story,” he added.

One of the largest studies done on the topic, the report’s results clarify prior research in smaller populations that showed an inconsistent association between BPA and respiratory disorders, Trasande said. The six countries in the study were Spain, France, Greece, Norway, the Netherlands and the United Kingdom.

“The limited study design is based on single samples to measure exposure and therefore is not capable of establishing a causal relationship between BPA and childhood asthma or wheeze. It is problematic to draw any meaningful conclusions from this report,” said Jennifer Garfinkel, director of product communications for the American Chemistry Council.

Can linings and thermal paper

One of the most studied bisphenols, BPA is a known endocrine disruptor, capable of altering hormones in the body. Fetuses and babies are especially vulnerable: BPA has been linked to fetal abnormalities, low birth weight, and brain and behavior disorders in infants and children.
In adults, BPA has been linked to diabetes, heart disease, cancer, obesity and erectile dysfunction. Premature death was also associated with BPA exposure, a 2020 study found. People who had higher levels of bisphenol A in their urine were about 49% more likely to die during a 10-year period.
Around since the 1950s, bisphenol A can be found in beverage containers, the lining of canned foods, dental sealants and many toys, according to the US Centers for Disease Control and Prevention.
The chemical was used to create baby bottles, sippy cups and infant formula containers until concerned parents boycotted those products more than a decade ago. The US Food and Drug Administration responded with a 2012 ban on use in baby bottles and sippy cups, followed by a 2013 ban on use in infant formula packaging.

However, the FDA has not banned use of BPA in other food products, saying “the available information continues to support the safety of BPA for the currently approved uses in food containers and packaging.”

Only BPA connected to asthma

Urine samples were collected from pregnant women in the study between the years of 1999 and 2010, when BPA was commonly used. The study found BPA in 90% of maternal urine samples taken during pregnancy.

Children born to those mothers had their lungs tested by spirometry between the ages of 7 and 11; mothers filled out questionnaires on their child’s wheezing and lung function. Of the several bisphenols analyzed, BPA was the only one associated with respiratory symptoms such as asthma and wheezing during elementary school age, according to the study.

“The result is quite significant and it seems to align with the latest European Food Safety Authority (EFSA) reevaluation of the risk to public health related to BPA exposures,” said independent consultant Maricel Maffini, a biological scientist who has published studies on bisphenols and was not involved with the study.

“EFSA identified the immune system as the most sensitive health outcome associated with BPA toxicity. It included effects such as asthma, allergy, and wheeze, among others,” Maffini added.

The researchers also examined bisphenol F and bisphenol S, which manufacturers sell as “BPA-free” plastic substitutes that are intended to be safer than BPA. The study found extremely low levels of BPF and BPS in urine samples and did not find any consistent associations with respiratory outcomes. That’s likely because the study was conducted before those alternatives became widely available, Trasande said.

However, research in animals is finding the same effects on prenatal development from BPS, linking it to problems with embryonic development and premature birth. Studies are also finding links to disruptions in the thyroid hormone system and heart arrhythmia.

How to avoid BPA

Today, BPA exposure is mostly through food and water contaminated by the linings of aluminum cans and beverages, followed by exposure to the thermal paper used to create shopping receipts, Trasande said.

You can limit your exposure by avoiding plastics as much as possible, he said. When using plastics, never put them in a microwave or dishwasher, because the heat can break down the linings and make them more easily absorbed. Other tips include: