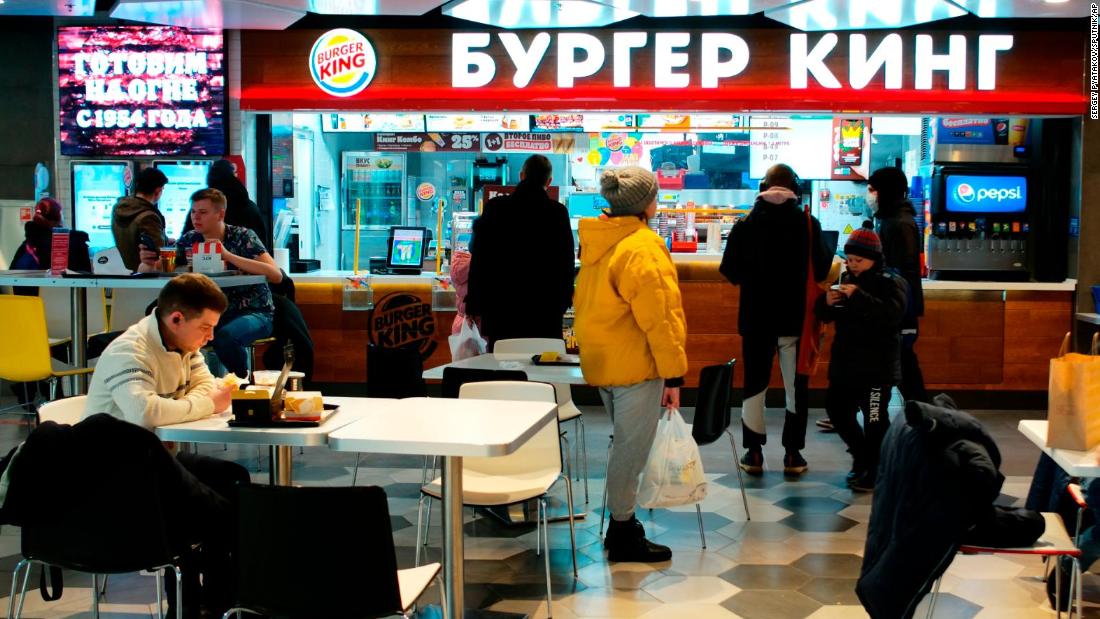 McDonald’s, Starbucks, Papa Johns and the owner of Burger King, among others, have said that they would either shut down operations in the country or pull support from restaurants there. Making good on those promises, however, is proving easier said than done.

“We do not own any assets or have any employees in Russia,” a Papa Johns spokesperson said in a statement, adding that Papa Johns is not currently earning any income from Russia. “That being said, we cannot unilaterally cause the independent franchisees that operate there to stop operations.” The franchise operator did not immediately respond to an inquiry for this story.

So why is it so hard for these companies to shut down in Russia?

When big corporations decide to expand internationally, they usually set up franchise agreements. Generally, the franchisor, the brand’s corporate owner, has the same goal as the franchisee, the operator on the ground: Both want to sell food and make money.

But the Russian assault on Ukraine has shifted those priorities. Now, US companies have decided — whether because of public pressure, reputational risk or for ethical reasons — that closing restaurants is more important than selling food. But franchise operators may not agree.

When American restaurants decide to expand into other countries, they typically rely on a local franchise operator to run their business on the ground.

“It’s very difficult for a US-based franchise company to be able to understand the local market dynamics of dozens and dozens of different countries around the world, and to try to translate an American brand into a European or an Asian market effectively,” said Chris Cynkar, a franchise consultant and adjunct professor of entrepreneurship at Carnegie Mellon University. “And so almost all international growth is based on a franchising model.”

Here’s how it works, according to Cynkar: The franchisor lends its brand, strategy and operating model to the franchisee. In exchange, the franchisee contributes capital and that essential local knowledge.

Contracts between franchisors and franchisees detail the terms of these agreements. And “every franchise agreement is going to be very unique,” Cynkar said.

Without direct knowledge of the agreements, it’s impossible to know what obligations restaurants have to their franchisees, and vice versa. But David Shear, president of the international unit at Restaurant Brands International (QSR), gave some insight into Burger King’s agreement in his open letter.
“There are no legal clauses that allow us to unilaterally change the contract or allow any one of the partners to simply walk away or overturn the entire agreement,” he wrote. “No serious investor in any industry in the world would agree to a long-term business relationship with flimsy termination clauses. This is exactly why we say it’s a complicated legal process when we are asked why we can’t just unilaterally shut down the business.”
What companies can do is try to force franchise operators’ hands by halting support, as RBI and Papa Johns (PZZA) say they’ve done.

But that can only go so far.

It may be harder for a franchise operator to run its business without the marketing support or secure supply chain offered by the franchisor. But if the franchisee can still rely on local vendors for ingredients, it can keep the doors open.

The consequences of closing

Once a company creates a partnership with a franchisee in another country, that franchisee can create its own contracts with other independent operators. Those contracts are struck within the region of operation, and are subject to local laws and politics.

A local operator in Russia, for example, has to weigh “what are the ramifications … under Russian law, if he orders all of his locations closed,” said Michael Seid, managing director of MSA Worldwide, a global franchise advisory firm.

Plus, those franchise operators have obligations outside of what they owe the franchisor.

“The local franchisee has built out a location. To do that they have acquired debt,” Seid said. “They also have lease payments. The landlord there is not going to be happy not to be paid their rent.”

Plus, in the current situation, there’s likely nobody from the company to enforce the corporate decision.

“They can’t go remove the signage from the outside of the store,” said Cynkar. “They can’t tell the local suppliers — the meat suppliers and the produce suppliers — to stop delivering, because those companies are … trying to make a living as well.”

The current situation is exposing the cracks in the franchise model. But experts don’t expect it to change, at least not much.

The future of franchising

One way to assert more control over stores is to avoid franchising altogether, instead opening corporate-owned locations. That’s what McDonald’s did: Roughly 85% of McDonald’s Russian locations are controlled by the company. But McDonald’s has been in Russia since before the collapse of the Soviet Union. And, well, it’s McDonald’s — not every company can do what McDonald’s can do.

What could happen, he said, is that some operators may explore new types of contracts.

“I suspect that there’s going to be some changes by some franchisors to at least try to have more power in this type of situation,” he said. That could mean “requiring operators to close, even if it’s just for a limited time.”

But, he added, it’ll be hard to come up with a contract like that.

“I don’t see it as an easy challenge to overcome,” he said, “given the complexity of the agreements and the rights of the owners.”