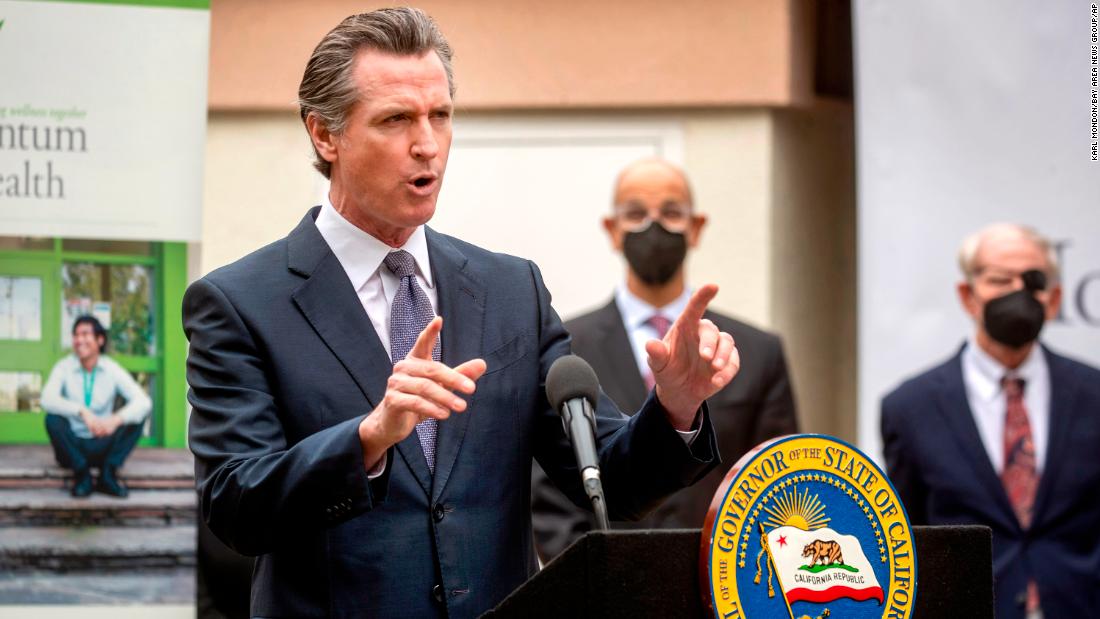 The Community Assistance Recovery and Empowerment (CARE) Court plan aims to compel homeless Californians — particularly people with psychotic disorders — to participate in plans that would offer “individualized interventions and services,” according to a news release from the governor’s office.

“CARE Court is about meeting people where they are and acting with compassion to support the thousands of Californians living on our streets with severe mental health and substance use disorders,” Newsom said in a statement. “We are taking action to break the pattern that leaves people without hope and cycling repeatedly through homelessness and incarceration.”

The CARE Court proposal still needs to go through the California Legislature to become law, but if fast-tracked, could go into effect as soon as the new fiscal year in July.

The 2021 Annual Homeless Assessment Report to Congress said California had a sheltered homeless population of more than 51,000. Sheltered homelessness is defined as “people who are staying in emergency shelters, transitional housing programs, or safe havens,” the report said.

California experienced one of the largest increases in its unhoused population — 7.4% — between 2020 and 2021, according to the report.

The CARE Court plan looks to help people before they are arrested or hospitalized in order to prevent incarceration or a conservatorship, the release said.

A convervatorship is a legal arrangement that gives a court-appointed individual, known as the conservator, the power to handle the financial and/or personal affairs of another adult who has been deemed incapacitated.

Family members, first responders and mental health providers could refer people and initiate the CARE Court program, though others could be directed to it following the commission of a crime.

The proposal could impact an estimated 7,000 to 12,000 Californians, including those with severe psychotic disorders like schizophrenia, California Health and Human Services Secretary Mark Ghaly said in a call with reporters prior to Newsom’s announcement.

Ghaly said courts would help develop a plan with three main elements: clinical support, “stabilization medications” and housing programs. In addition, individuals will have access to a public defender to assist them.

Ghaly said that a court order to hold people accountable — rather than relying on voluntary compliance — was the “magic recipe.”

However, there could be consequences if either the person receiving the plan or the local government providing care fails to meet expectations.

If someone doesn’t complete the program, whatever process they had been diverted from will resume, senior counselor to the governor Jason Elliot told reporters on the call. For example, if they had been referred to CARE Court during a criminal proceeding but failed to complete the plan, they could return back to criminal court.

People who don’t complete their care plan could be referred for a conservatorship “with a presumption that no suitable alternatives to conservatorship are available,” according to the news release.

All California counties would be required to provide treatment under the plan, the release said. Those who do not meet their duties could face sanctions and, “in extreme cases,” the court may “appoint an agent to ensure services are provided.”

Chris Martin, policy director for the state-wide advocacy organization Housing California, said in a statement to CNN that the organization appreciates Newsom’s desire to address homelessness, but people know what it takes to end the problem: Affordable housing with services and care to sustain the housing.

“We also know these services work best when people use them voluntarily, rather than forcibly,” Martin’s statement read. “It is critical to ensure that efforts to enhance care and expand housing options for people with serious behavioral health conditions, including unhoused people, do not further criminalize them or take away their agency.”

‘We need to stop trying to fix a failed system’

Officials across the state expressed their support of Newsom’s new program.

“The care for our most vulnerable should not be optional, it should be a legal mandate,” said Oakland Mayor Libby Schaaf.

“We are rapidly moving back to where we were 100 years ago in using incarceration as the only alternative for those persons who are severely mentally ill,” Manley said. “We need new ideas and a fresh approach and Governor Newsom is offering us one.”