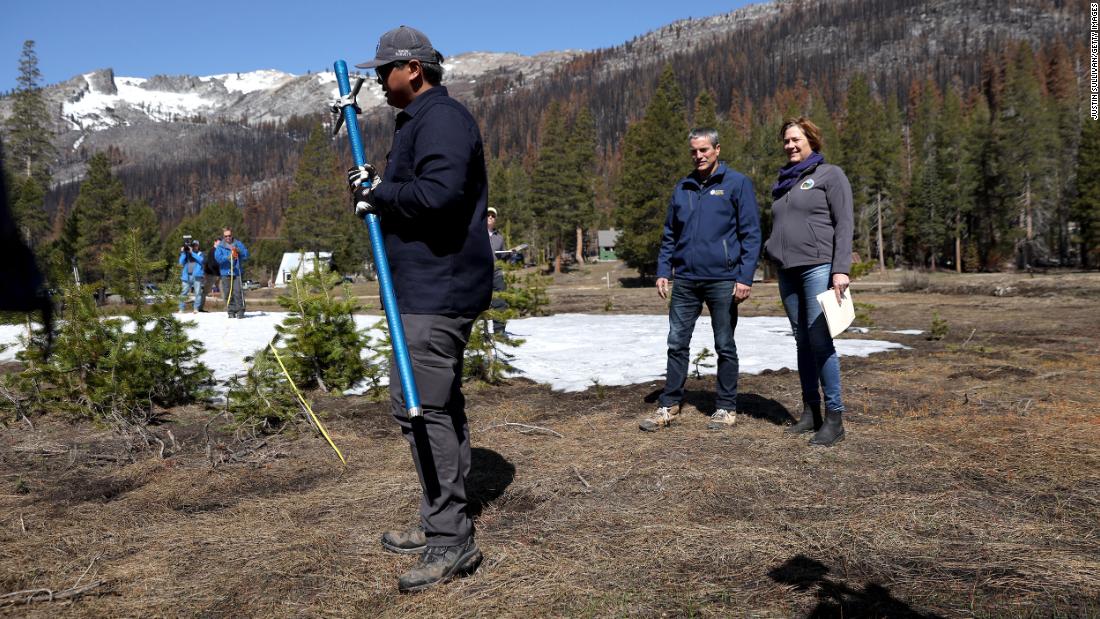 South of Lake Tahoe at Phillips Station, where officials set out Friday to conduct the annual end-of-winter snowpack measurement, the snow depth was just 2.5 inches. The average April 1 snow depth is 66.5 inches at this location, officials said.

More importantly, that 2.5 inches of snow only contained the equivalent of 1 inch of water — a scant 4% of average for April 1, according to Sean de Guzman, an engineer with the California Department of Water Resources.

Snow typically builds up in the Sierra Nevada throughout the winter, storing precious water that later melts and drains into reservoirs in the spring. California snowpack provides 30% of the state’s water, according to the Department of Water Resources.
Earlier on Friday, the National Weather Service reported an alarming statistic: the January-March period this year was the driest such period “by a huge margin” in 101 years of record-keeping at three key observing stations in California.

“During that period, California’s only received about half the amount of rainfall recorded in comparison to 2013, which ended up turning into the driest calendar year on record,” de Guzman said.

It’s a huge nosedive from how this winter started on the West Coast.

Climatologists were elated in December as they watched the snow pile up that month. More than 17 feet of snow fell near Donner Pass in the Sierra Nevada, breaking decades-old records.

Then, starting in January, precipitation “flatlined.” Statewide snowpack, which — at 6.5 feet — was above average in December, sank to 90% of normal. Just 9 inches of snow fell at Donner Pass in January.

State officials are preparing for water shortages this summer. California Gov. Gavin Newsom issued an executive order Monday calling on local water agencies to implement their conservation plans and urging residents to self-monitor water use. He directed the State Water Resources Board to consider a ban on watering decorative grass at businesses and institutions, according to a release from his office, but would not include residential lawns or green areas in schools and parks.

“While we have made historic investments to protect our communities, economy and ecosystems from the worsening drought across the West, it is clear we need to do more,” Newsom said.

And on March 18, the Department of Water Resources announced it was reducing the amount of water shared with municipalities by 10% as the state goes into its third year of drought.

The state had originally intended to give the different regions 15% of the water requested through the State Water Project, but will now lower that to 5%. The State Water Project is a state-owned “multi-purpose water storage and delivery system” that shares water supplies to different cities and counties, according to its website.

“We are experiencing climate change whiplash in real time with extreme swings between wet and dry conditions,” department director Karla Nemeth said in a statement at the time. “We are continuing with a series of actions to balance the needs of endangered species, water supply conservation, and water deliveries for millions of Californians.”

CNN’s Stella Chan and Rachel Ramirez contributed to this report.