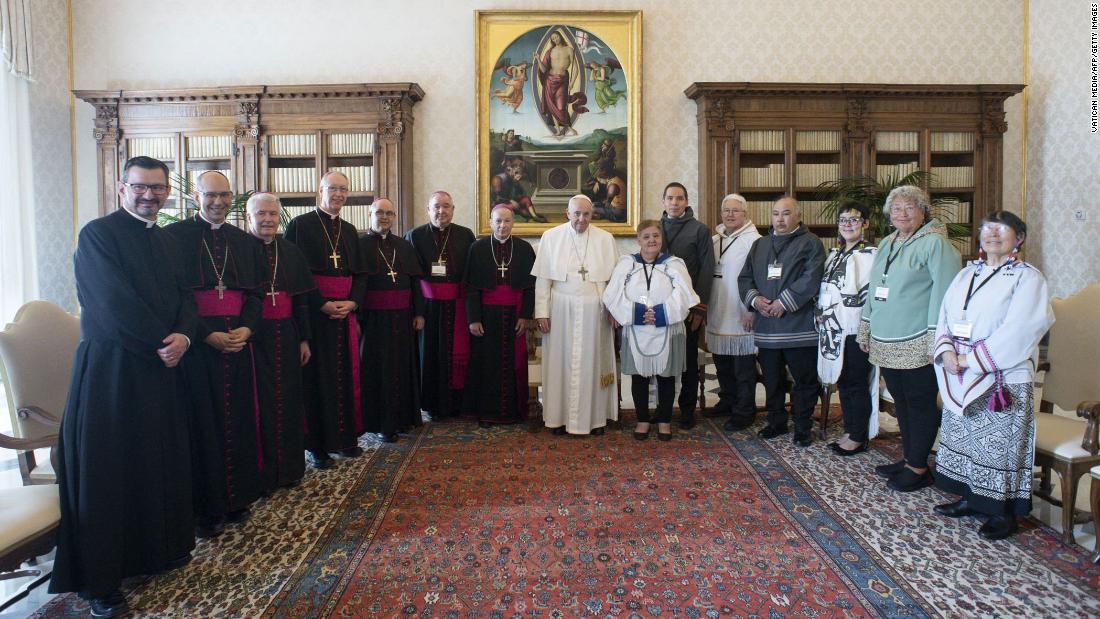 At the Vatican, representatives for the Métis and Inuit, some of the largest Indigenous groups in Canada, urged Pope Francis to travel to their country to apologize for the Catholic Church’s role in the residential schools system.

During both hour-long meetings, the Pope intended to “listen and do space for the painful stories brought by the survivors,” the Vatican said in a statement.

The meetings come after hundreds of unmarked graves were discovered last year on the grounds of former residential schools in British Columbia and Saskatchewan. Canada’s Truth and Reconciliation Commission has reported that more than 4,000 Indigenous children died either from neglect or abuse in residential schools, many of which were run by the Catholic Church.

Last year, the Canadian Conference of Catholic Bishops apologized for its role in the residential school system and expressed “profound remorse,” but Indigenous leaders have long called for an apology from the Pope.

“We know that reconciliation is a long journey and it’s going to take commitment and action from so many people. It’s going to take action from churches, parishioners, the Canadian Conference of Bishops — the Catholic church as a whole and the Pope.” Métis National Council president Cassidy Caron told reporters after the Monday meeting.

“Reconciliation did not begin today with a meeting with Pope Francis and it doesn’t end here either. This is just one stepping stone in that journey,” Caron added.

In addition to their request for an apology, Natan Obed, the Inuit Tapiriit Kanatami president, said the delegation asked the Pope to consider whether the church should also use its resources to help with work linked to the discovery of unmarked graves on residential school properties.

“A lot of what has happened in residential schools happened with people who are no longer alive, but that is not always the case. And there are still things that we can do together to ensure that there is justice for those who do not have it yet,” Obed told reporters.

Martha Greig, a residential school survivor who was part of the Inuit delegation, said she told the Pope she wishes he would travel to Canada to issue a “genuine heartfelt apology” because there are many families who need to heal and “to move on.”

“As a former residential school student, that would mean a lot to me, but more so for my fellow former students. A lot of them have now passed away, but it’s also their children that are affected as well,” Greig told reporters.

The groups thanked the Pope for his time, Obed said, adding “there was also a true sense of openness and kindness that was shown to us as a delegation.”

The Vatican has said several other meetings with the Canadian delegations will take place this week.