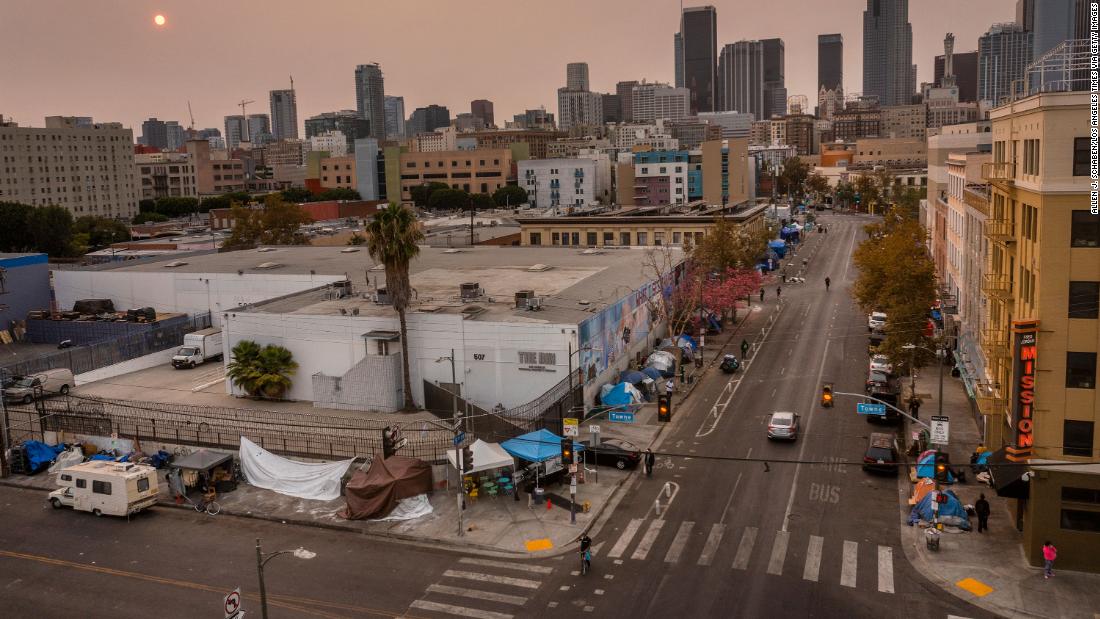 The alliance — a group of residents, business owners and community leaders — sued the city and county of Los Angeles in March 2020, to “address the death and devastation on our streets,” said Elizabeth Mitchell, the lead counsel for the alliance, during a Friday news conference with city leaders.

The suit alleged the city and county neglected their responsibilities and were investing resources in approaches that were too slow to solve the problem. It called for providing services for the homeless population, including training, healthcare and shelter, in a faster time frame.

But the agreed-upon settlement terms do not address the issue holistically, Mitchell said. The alliance’s case against the county continues, as they were not part of the settlement, and Mitchell said, “We will not stop working tirelessly to hold them accountable.”

In the settlement, the city agreed to create shelter and/or housing over the next five years to accommodate 60% of people experiencing homelessness in the city who “do not have a serious mental illness and are not chronically homeless with a substance use disorder or chronic physical illness,” according to a fact sheet from the city.

The 60% commitment — which could require the city to provide anywhere from 14,000 to 16,000 beds — will be based on the 2022 count of that population, which is still in progress, according to the city.

Those who are not covered under the city’s agreement will be the responsibility of Los Angeles County, and will be referred to the county for housing and services, the city said.

Skip Miller, outside counsel for the county in the lawsuit and a partner at the Miller Barondess law firm, said in a statement the suit has “no merit with regard to the County.”

“It is between the plaintiffs and the City, and we’re glad they settled. We intend to litigate and win this case. The County is more than doing its job and doing everything possible to address homelessness without stigmatizing it as a crime,” Miller said in a statement to CNN, calling assertions the county is not fulfilling its obligations “baseless.”

“Unlike the lawsuit, which focuses on four miles of downtown LA, the County is obligated by law to use its resources equitably among all 88 cities and unincorporated areas within the 4,000 square miles of its jurisdiction,” Miller added.

More than 66,400 people were experiencing homelessness in Los Angeles County at the start of 2020, according to a count from the Los Angeles Homeless Services Authority. That number was roughly 12.7% higher than the previous year. The city of Los Angeles saw a 16.1% rise in the same time frame, with more than 41,200 people experiencing homelessness in early 2020.
At the time, the agency said that while the county’s homeless services system had grown and most of the homeless people who were being housed stayed housed, “economic conditions and (the) legacy of systemic racism” continued to push more people to homelessness. LAHSA did not conduct a survey in 2021 due to the pandemic.

Los Angeles City Council President Nury Martinez said the agreement to build beds will remain in place no matter who is in office, but addressing the problem will take more than finding housing.

“Right now we are in triage mode,” Martinez said. “We need to focus on how to prevent the people from ending up on our streets. People need help, people need services, and that’s how you fix a crisis. And what good is building housing if you can’t provide the services that people need?”

Martinez also said in a statement that while the city will do their part, “We need the County of Los Angeles to provide mental healthcare, substance abuse treatment, and outpatient rehab beds.”

The settlement term sheet has been filed with the court and once a settlement is agreed on, the city council will vote to finalize it, the city said in a statement.

The city plans to request funding to address homelessness from the county, state and federal government and will “consider other possible funding mechanisms” to pay for future housing and services, according to the statement.