Compass’ revenue jumped 31 percent in the fourth quarter of 2021, and 73 percent for the entire year, though expenses related to the company’s public debut pushed up losses.

For the second quarter in a row, Compass has managed to boost its year-over-year revenue numbers, while also seeing its losses rise, according to an earnings report the company published Wednesday.

The company also reported similar results for the entirety of last year, with revenue jumping up significantly even as losses — much of them related to the company’s public debut — grew.

The report specifically shows that during the final three months of 2021, Compass earned $1.6 billion in revenue. That’s slightly lower than the company’s revenue hauls in the second and third quarters of 2021 — when it earned $1.95 billion and $1.74 billion, respectively — but it still marks a 31 percent increase compared to the fourth quarter of 2020.

At the same time, the company lost $175 million between October and December of 2021. By comparison, Compass lost $100 million one quarter prior, and $7.1 million another quarter before that. The earnings report notes that “the majority of the net losses in 2021 were driven by the non-cash stock-based compensation” expenses the company had, much of which were related to Compass’ initial public offering last spring. Compass is well-known for offering stock to agents, and non-cash stock-based compensation expenses specifically accounted for $93 million in losses during the fourth quarter of 2021.

The report also includes total numbers for 2020, revealing that over the course of the entire year Compass earned $6.4 billion in revenue, which represents a 73 percent year-over-year increase. Losses for the year added up to $494 million, $386 million of which came from non-cash stock-based compensation. Losses in 2021 were up from $270 million in 2020.

Compass’ adjusted EBITDA — which is a measure of earnings before expenses such as taxes and interest, and is used as a gauge of a company’s profitability — was $2 million in 2021, compared to a loss of $156 million one year prior.

In the report, Compass Founder and CEO Robert Reffkin described the 2021 revenue growth as “exceptionally strong” and noted that “our agents closed a record 225,000 transactions, up 56 percent in 2021 while the industry grew transactions by 8 percent.”

In the fourth quarter alone, Compass agents closed 56,912 transactions, according to the report, which is a 20 percent year-over-year increase.

“I am happy to announce that our strategy of achieving strong revenue growth while improving profitability and investing in our business is working exceptionally well,” Reffkin also said in the report.

Wednesday’s report further notes that Compass entered 25 new markets in 2021, which brought the company’s total market count to 69 by the end of the fourth quarter. The company had an average of 12,176 agents during the fourth quarter of 2021, which was up by 560 compared to one quarter earlier, according to the report.

Going into Wednesday’s earnings report, Compass stock was trading at around $8.50 per share. That was down slightly for the day, as well as down from just above $20 per share when the company first went public last April, though a number of real estate companies have seen their share prices decline in recent months. 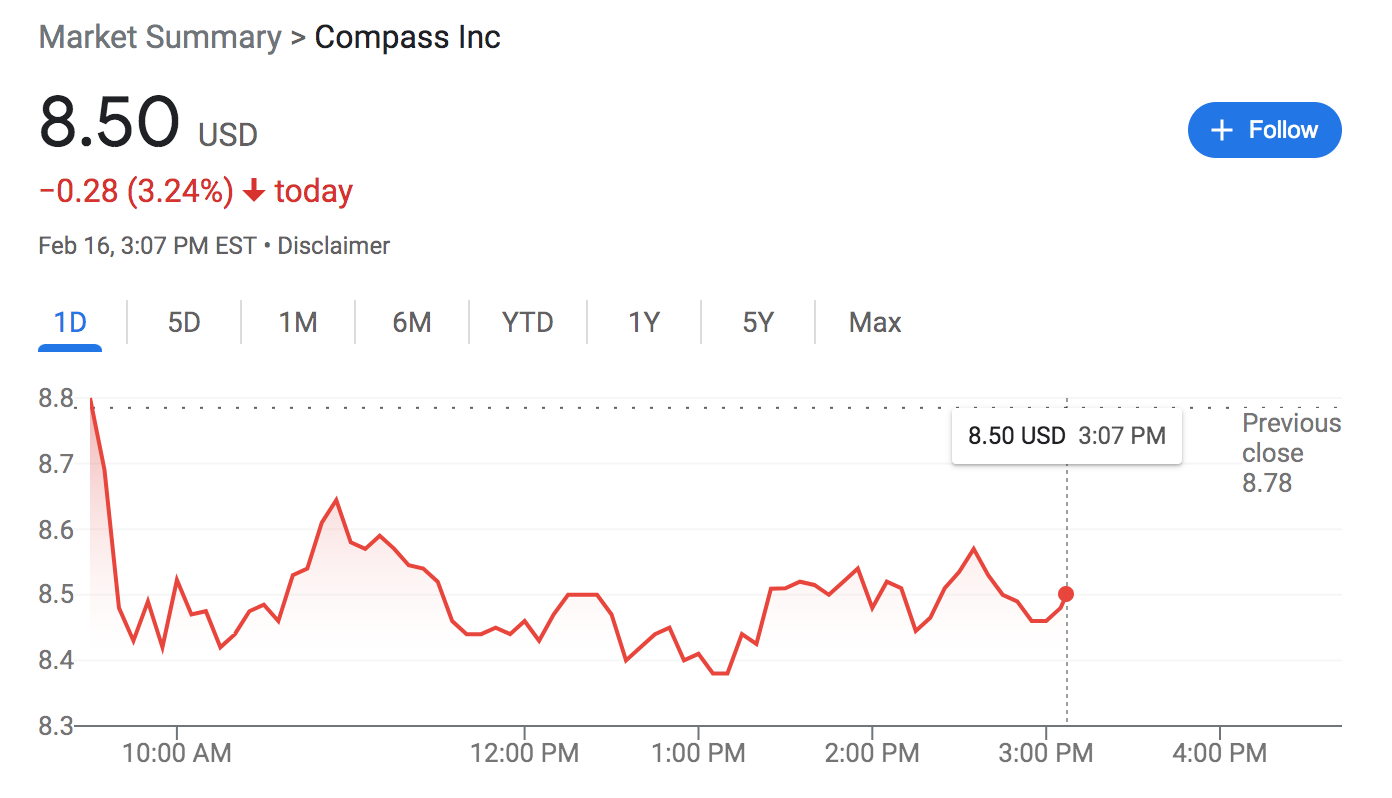 Compass had a market cap of about 3.46 billion as of the close of the market Wednesday.

The company last reported earnings in November. At the time, the company revealed that it had seen spikes in both its revenue and its losses.