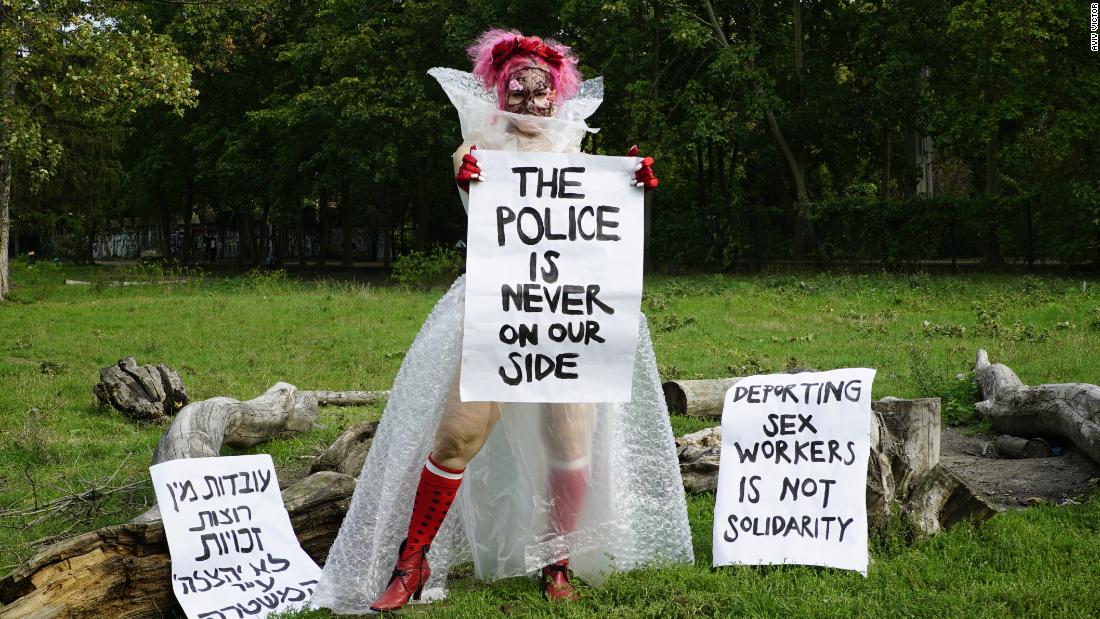 There is no shortage of depictions of sex work in media, from films like “Moulin Rouge” and “Memoirs of a Geisha” to, more recently, the HBO teen drama “Euphoria,” the world has come to expect a certain narrative when hearing stories of one of society’s most tabooed career paths.

“Even ‘Pretty Woman,’ which is a great film that I really enjoy,” said Elio Sea, co-curator of “Decriminalised Futures” — a new exhibition at the Institute of Contemporary Arts in London which explores the topic of sex work through art — “the rags to riches (story), being saved by this man who’s her client, if you look at it from a feminist angle and you look at it from a sex worker rights angle, it’s not great.”

Better representation was the main concern for Sea and fellow co-curator Yves Sanglante when planning the show of 10 powerful artworks which grapple with the humanity, hypocrisy and — sometimes — humor of the much-maligned sex work industry, as well the prohibition laws that make it, or parts of it, a criminal act in many countries.

The exhibition wants to celebrate the movement of people who have fought for sex workers’ rights and to end exploitation, criminalization and poverty within the industry, explains accompanying show notes.

Each work was selected from an open call-out that received around 90 applications from international artists, sex workers and allies alike.

“Often in mainstream media the stories about sex workers are not by sex workers,” said Sea. “They’re very simple tropes, you know, the bad woman or the fallen woman or the victim who’s trying to fight her way back. And with this exhibition, we’ve tried to broaden that and give people an opportunity to tell their stories on their own terms in more detail and in more nuance from all different perspectives.”

Throughout the exhibit, common stereotypes are subverted in works that blend creative expression with education. In “ẹjẹ (Blood),” by artist Tobi Adebajo, viewers walk through a hackneyed plush carpeted room lit poignantly by red light, but are met with a narrated film that speaks to the ancestral roots of prostitution and the security it can provide. “I am a sex worker,” the video booms, “my child has access to safety because of my work.”

A zine created by Danica Uskert, an adult actor whose stage name is Danica Darling, and Annie Mok, a trans writer and artist, includes screenshots of text messages of from clients. “Do you do prostate work?” reads one message on display.

Far from simply promoting sex work to the masses, as some critics of the exhibition have claimed, the curatorial team believe that “Decriminalised Futures” provides a spectrum of experience: “When you really engage (with the art) there’s this nuance and interconnectedness that’s much richer,” Sea said, “and a lot of people don’t want to do that. They want something that’s simplistic, or they want to just say, ‘Everybody’s a victim and everybody’s exploited.'”

As the show notes its introduction, the sex workers’ rights movement has a long and storied history dating back as far as the 1800s. “They have always been the muse, always as the subject,” said Sanglante, “now there’s just a rising sense of like, who is actually given the spotlight? Who is given the opportunities?”

On a corridor wall inside the gallery is a quotation from English suffragette Alison Neilans, penned in 1922: “The prostitute is the scapegoat for everyone’s sins,” Neilans wrote exactly 100 years ago, “perhaps no class of people has been so much abuse, and alternatively sentimentalised over as prostitutes have been but one thing they have never yet had, and that is simple legal justice.”

Top image: A still from Liad Hussein Kantorowicz’s film “Mythical Creatures” (2020). “Decriminalised Futures” is now open at the Institute of Contemporary Art in London until May 22.