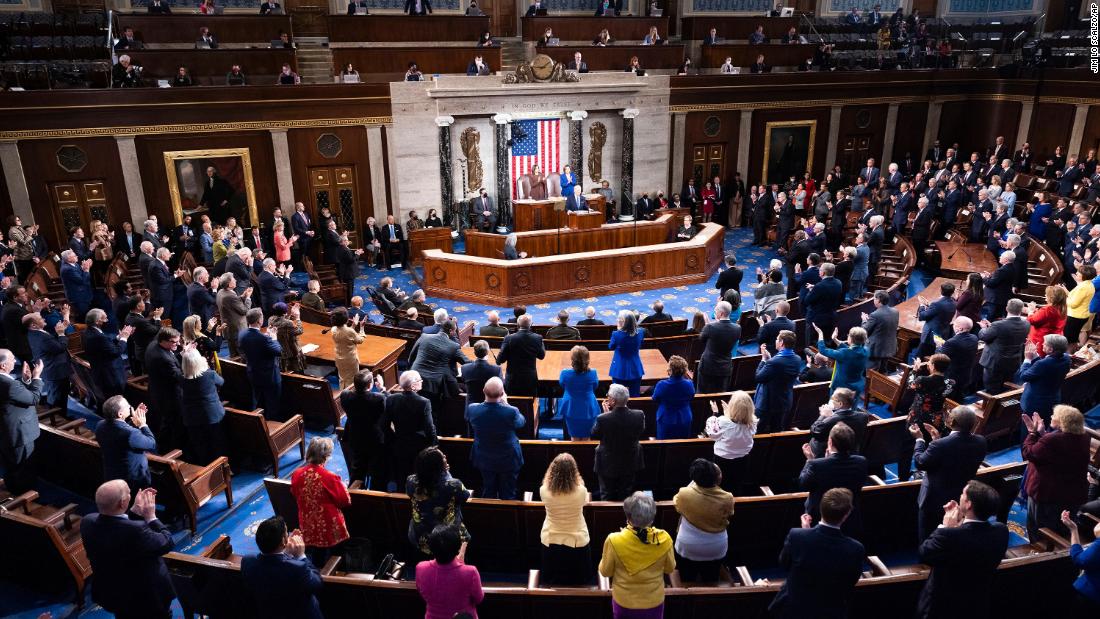 That blue and yellow aren’t typically complimentary hues in a sartorial sense did not appear to bother members like Rep. Brenda Lawrence, Democrat from Michigan, who wore a bright blue dress together with a bold yellow blazer. Nor did the color combo stop Republican Rep. Victoria Spartz of Indiana, who wore the same, just swapped — yellow dress, bright blue blazer. Spartz emigrated from Ukraine and has deep ties to the country.

Rep. Cathy McMorris Rodgers, a Republican from Washington, wore a yellow blazer so bright it appeared to have a neon glow. Sen. Joni Ernst, a Republican from Iowa who spent time in Ukraine in college studying in an agricultural program, made herself the knitted sunflower pin in blue and yellow she was wearing on her lapel. The sunflower is the national flower of Ukraine.

First lady Jill Biden also wore a sunflower. An appliqué of a small embroidered sunflower was added to the cuff on one sleeve of Biden’s blue silk dress, which was designed by New York-based Sally LaPointe. Biden’s spokesman Michael LaRosa told CNN the sunflower was a last-minute addition to the dress, applied earlier Tuesday.

Speaker of the House Nancy Pelosi also wore a bright blue suit, as did Sen. Mazie Hirono, Democrat of Hawaii, accessorizing with a yellow scarf. Secretary of Energy Jennifer Granholm also opted for a scarf with special meaning, choosing to wear around her neck a tulip silk scarf made by a Ukrainian designer and given to her last August in Kyiv by Ukraine’s foreign minister during a summit.

It wasn’t only the women of Capitol Hill who got in on the Ukraine support with their choices of clothing. California Democratic Rep. Eric Swalwell draped a large blue scarf over his suit. New York Rep. Hakeem Jeffries and House Majority Leader Steny Hoyer, a Maryland Democrat, were two of several male members wearing yellow ties. Sen. Patrick Leahy, the Vermont Democrat who is president pro tempore of the Senate, told CNN on Tuesday he spent some time earlier in the morning really looking through his closet to find the right tone of yellow to wear in support of Ukraine.

This year is not the first time a color story has emerged at the State of the Union address.

In 2020, dozens of female members of Congress opted for white outfits in protest of then-President Donald Trump’s agenda, and to pay homage to the suffragettes on the 100th anniversary of women winning the right to vote. It was not the first time white was chosen during Trump’s tenure. In 2018, many House Democratic women wore black to the State of the Union to send a message to Trump about sexual harassment. Conversely, that was the year Trump’s wife Melania Trump showed up to State of the Union in a white pantsuit, which was widely interpreted as a symbol of support for women in the wake of headlines about Trump’s alleged extramarital affairs.