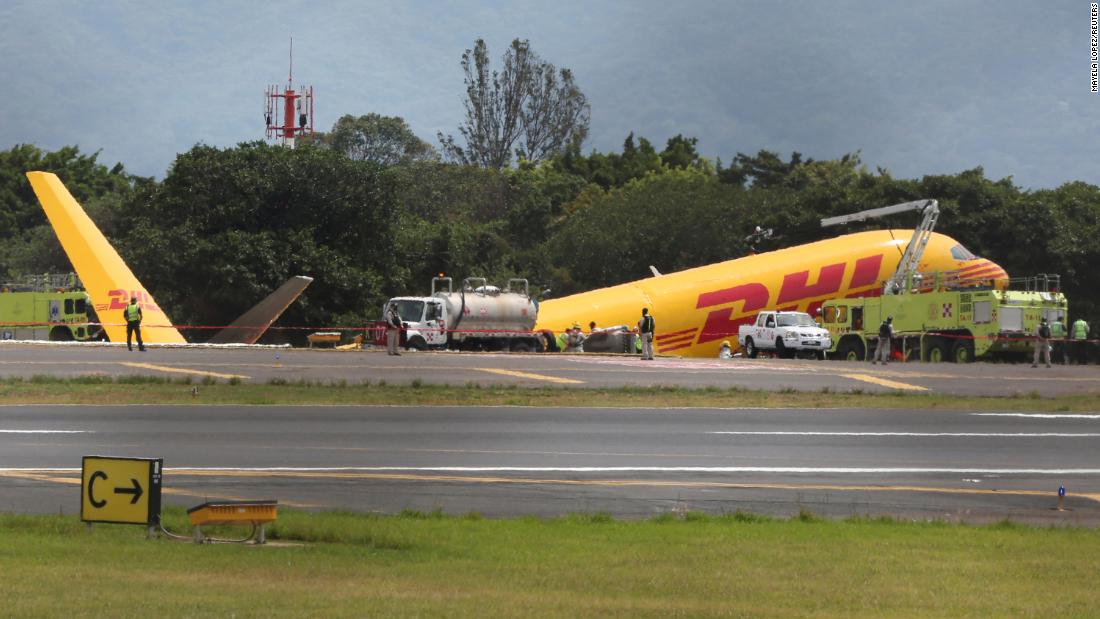 Some 8,500 passengers and 57 commercial and cargo flights were affected by the closure, Aeris said.

DHL, part of Deutsche Post AG, said the crew was unharmed and that one member was undergoing a medical review as a precaution.

Images from Costa Rican newspaper La Nacion showed a yellow plane emblazoned with the DHL logo being doused with firefighting foam where it had landed on a grassy field next to a runway. The tail had detached and a wing had broken, the photos show.

The aircraft was bound for Guatemala when it apparently had a failure in the hydraulic system, said Luis Miranda Munoz, deputy director of Costa Rica’s civil aviation authority. The issue prompted the pilot to request an emergency landing shortly after takeoff, he said.

A Boeing spokeswoman said it would defer questions to investigating authorities.

DHL and airport authorities said they were working together to move the aircraft, although they said it was not affecting operations.

“DHL’s incident response team has been activated and an investigation will be conducted with the relevant authorities to determine what happened,” DHL said.

Aeris originally estimated the airport would remain closed until 6 p.m. local time, which would have impacted three cargo flights and 32 commercial flights to and from the United States, Central America, Mexico, Canada and Europe.

Top image: Firefighters work at the scene where a Boeing 757-200 cargo aircraft operated by DHL made an emergency landing before skidding off the runway and splitting, aviation authorities said, at the Juan Santamaria International Airport in Alajuela, Costa Rica April 7, 2022. Credit: Mayela Lopez/Reuters