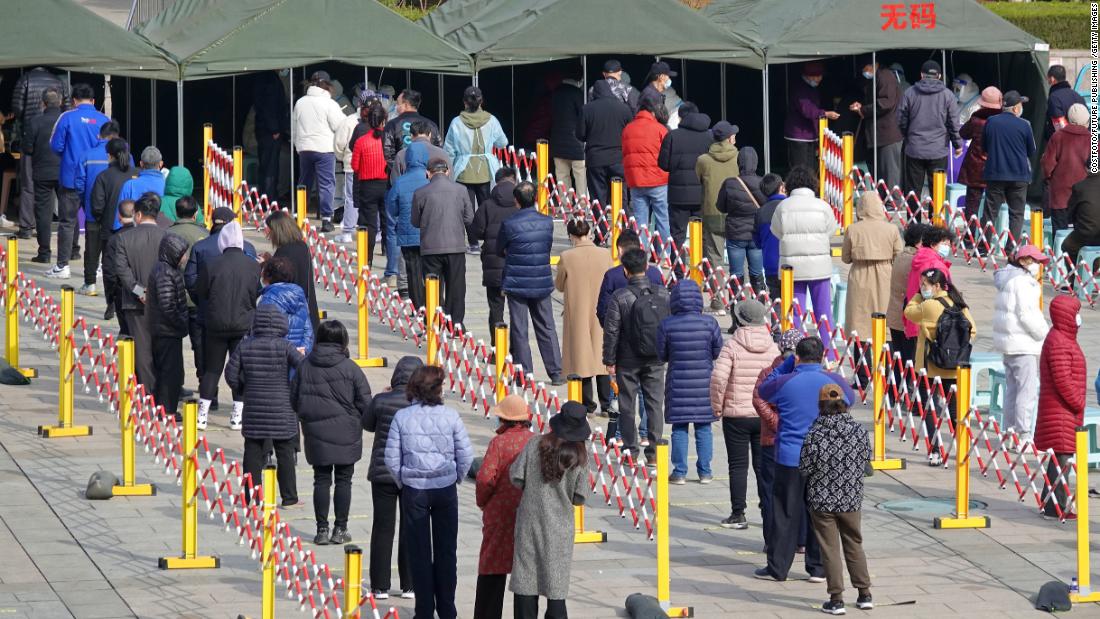 Health officials said 2,125 cases were reported across 58 cities in 19 of 31 mainland provinces, marking the fourth consecutive day China reported more than 1,000 daily local cases. More than 10,000 cases have been reported since the latest outbreak began in early March, the NHC said.

Saturday, the commission reported 3,122 local cases — the highest number of daily infections since the Wuhan outbreak and the first time new cases have exceeded 3,000 in a day, NHC data showed.

Throughout the pandemic, China has adhered to a strict zero-Covid policy that aims to stamp out all outbreaks and chains of transmission using a combination of border controls, mass testing, quarantine procedures and lockdowns.

Nearly half of the total infections in the latest outbreak have been reported in northeastern Jilin province, with 4,605 cases since March 1, when the first clusters of cases in Jilin’s border city Yanbian were identified, according to the provincial government.

The bulk of cases on Sunday, 1,026, were also reported in Jilin province, according to the NHC. Jilin province’s city of Jilin has locked down 504 neighborhoods and launched eight rounds of mass testing, the municipal government said.

Shenzhen, which borders Hong Kong, recorded 66 positive cases Saturday and health authorities announced in a news release Sunday evening that from March 14 to March 20, all businesses in the city — apart from those deemed essential or supplying Hong Kong — would suspend operations or introduce work from home measures.

Public transport has also been suspended, as well as indoor dining, while all public venues excluding grocery stores and pharmacies have been closed, the authorities said.

Shenzhen will conduct three rounds of mass PCR testing for all residents during the lockdown, according to the release. Residents have been advised to avoid leaving the city unless necessary, and those who need to travel must present a negative PCR result issued within 24 hours of their departure.

Major Apple supplier Foxconn announced it suspended its operations in Shenzhen to comply with Covid-19 restrictions in the city.

“The date of factory resumption is to be advised by the local government,” Foxconn said, adding “Due to our diversified production sites in China, we have adjusted the production line to minimize the potential impact.”

The restrictions imposed on Shenzhen appear less stringent than those on Changchun, a city of 9 million that entered a strict lockdown Friday. Residents there have been banned from leaving their homes, while only one person per household is permitted to go grocery shopping every second day.

In Shanghai, 169 cases were reported Sunday, bringing its total number of infections in this latest outbreak to at least 778 since March 1, according to the municipal government

The city launched a “2+12” policy mandating people in the same neighborhood, workplace or school with close contacts of Covid cases to follow two days of home isolation and 12 days of health monitoring, according to the municipal government. The city also advised its 24.87 million residents not to leave the city unless necessary.

Chinese officials have been under pressure to bring outbreaks under control and have been reprimanded by higher administrations for “poor performance” as cases grow.

China has dismissed at least 26 government officials this month in cities where outbreaks have occurred, including a mayor and a director of municipal health commission in Jilin province, and a vice mayor and a deputy director of the provincial police department in Guangdong.