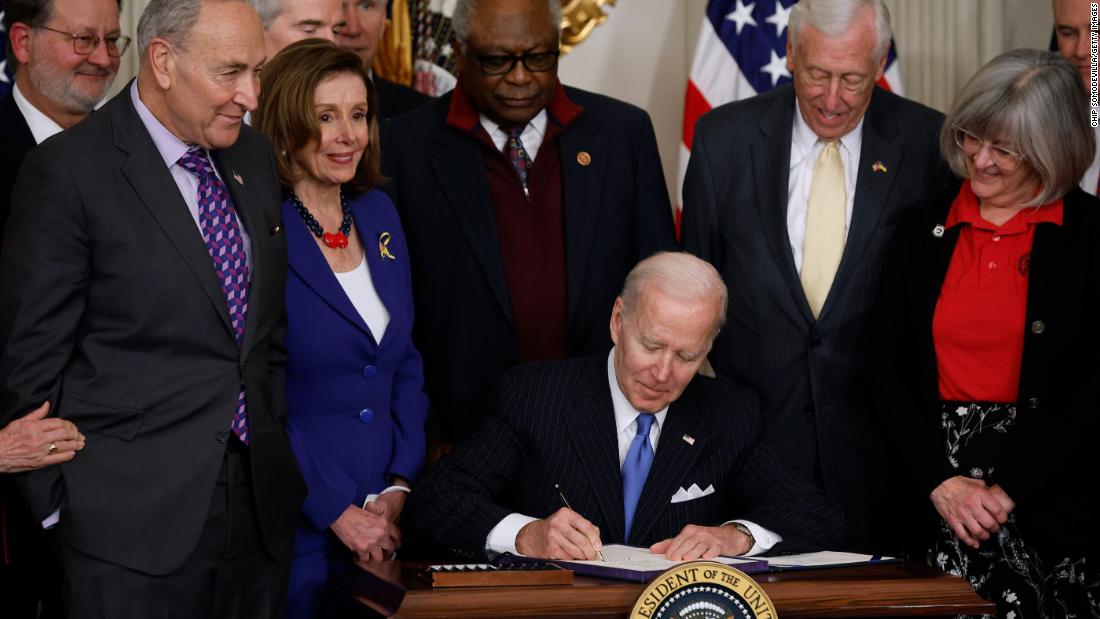 Had it taken place at nearly any other time, the perfunctory event in Washington might have come and gone. But in the age of a pandemic, House Speaker Nancy Pelosi’s close proximity to the President during the signing — just a day before she would announce that she had tested positive for Covid-19 — has triggered alarm.
And elsewhere in Washington, a slew of cases among political partygoers illustrates the push and pull between returning back to “normal” life and continuing efforts to mitigate the spread of the coronavirus.

Following the Gridiron Club Dinner over the weekend, an annual event where members of the press hobnob with prominent Washington officials, more than a dozen attendees tested positive — including two members of Biden’s Cabinet.

Simmons was a close contact of the vice president, the White House said in a statement. A close contact is defined by the US Centers for Disease Control and Prevention as being within 6 feet for a cumulative total of 15 minutes over a 24-hour period.

The President and vice president have continued to test negative for Covid-19 and have both received their second Covid-19 vaccine booster doses in recent days.

The President, who is 79 years old, is at an increased risk for a more severe case of Covid-19 because of his age, although the CDC says older adults who are up-to-date on vaccines and boosters significantly reduce their risk of hospitalization and death.

Biden’s bubble, the White House maintains, goes beyond the CDC’s guidelines to insulate him from potential infection — testing individuals close to him and implementing physical distancing when possible. And yet, as this week’s events have transpired, the limits of the White House bubble have been tested — with Covid currently affecting at least four individuals in the line of succession to the President to varying degrees.

Officials and visitors have not been required to wear masks or socially distance at large White House events since the CDC updated its new metrics to guide Covid-19 restrictions such as mask-wearing in late February. Covid cases in Washington have declined since their peak in early January, when the country was facing a wave of Omicron variant cases.

The White House says that only individuals who are in “close contact” with Biden are tested immediately before meeting or attending events with him, and that not everyone who attended Wednesday’s event on the Postal Service was tested. It also says additional testing protocols for Biden will be up to his doctors.

Pelosi, along with other members of Congress at the White House on Wednesday, tested negative ahead of the signing event.

She and the dinner attendees who have tested positive are not considered to be close contacts of the President.

Harris, who is considered a close contact to someone who tested positive this week, did not need to quarantine because of Simmons’ positive test, the White House said, adding that she would follow CDC guidance for close contacts. The CDC recommends that people who are exposed to Covid and are up-to-date on vaccinations be tested at least five days after the close contact as well as wear masks around other people for 10 days following the contact.

But on Thursday, as she presided over the confirmation vote for incoming Supreme Court Justice Ketanji Brown Jackson, the vice president was seen maskless at the Senate dais. Harris sometimes could be seen putting her hand up, as if to request a senator not approach too closely, but there were times when individuals, masked and unmasked, did approach her.

Asked whether Harris had breached protocol by remaining unmasked inside the chamber, White House press secretary Jen Psaki said she had not done “further analysis” and noted that the vice president was sitting on a dais slightly away from the Senate floor.

She later confirmed that Harris would follow CDC protocols at other events, such as celebrations at the White House for Jackson’s confirmation.

Psaki said on Wednesday that the administration feels it has the appropriate measures in place necessary to continue its “return to work” policy.

On Friday, the White House will hold an outdoor celebration for Jackson’s confirmation.

The reception has already drawn some parallels to Supreme Court Justice Amy Coney Barrett’s nomination announcement in the White House Rose Garden in late September 2020, which ended up being a likely Covid-19 superspreader event, and preceded then-President Donald Trump’s Covid-related hospitalization by less than a week.

The Biden White House has noted, importantly, that unlike at the time of Barrett’s reception, Americans now have wide access to Covid-19 vaccines.

“At that point in time, vaccines weren’t available. People were not vaccinated. It certainly puts us in a different space,” Psaki said on Thursday, emphasizing that Friday’s event will be outdoors.