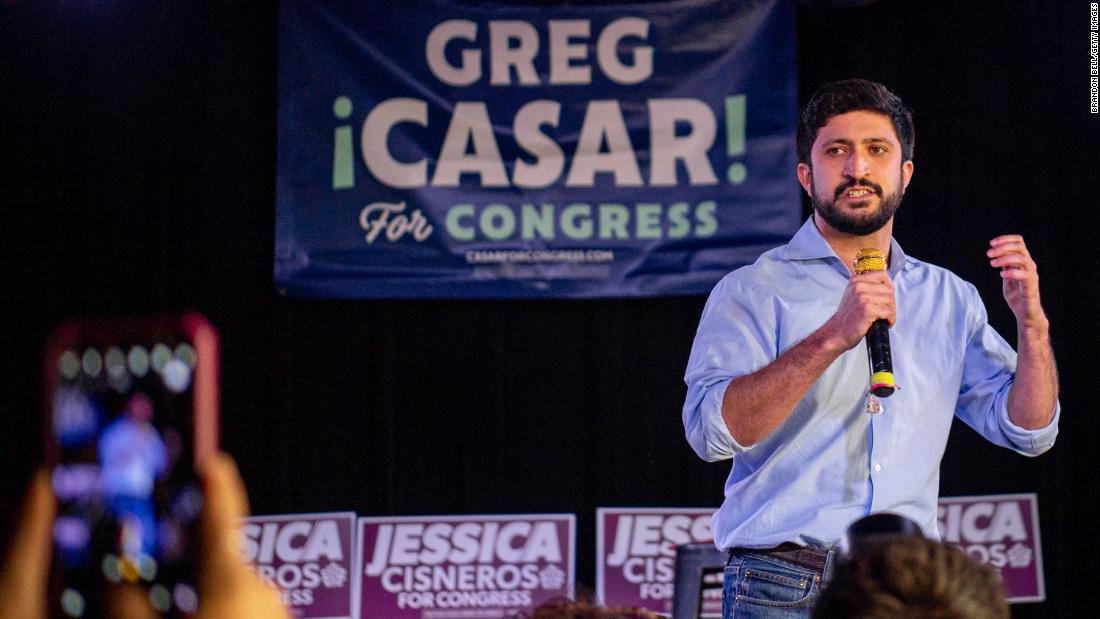 The Texas primaries include several marquee matchups: Gov. Greg Abbott and state Attorney General Ken Paxton face GOP challengers, while in Laredo, longtime Rep. Henry Cuellar, the most conservative Democrat in the US House, faces a primary rematch with progressive Jessica Cisneros.
But Tuesday will also serve as a test run for the battles for the governor’s office and several key congressional districts that will play out in the fall. Democratic campaigns and party officials say they are watching closely to see how the restrictive new voting law passed by the Republican-dominated Texas Legislature and signed by Abbott, who is seeking a third term, shapes primary turnout, and how the party can best reach those most directly affected by the law.
“We’re not going to be cowering. We’re not hiding from it. We’re not going to try to design crazy strategies,” said Nick Rathod, the campaign manager for Democrat Beto O’Rourke, who is challenging Abbott. “We’re going to try to meet it head-on with the army that we’ve been building.”
Democrats already entered 2022 facing voter anxieties over inflation and the continuing pandemic, and battling the historical trend of first-term presidents seeing their parties battered at the ballot box in midterm elections.

In Texas, though, they face additional challenges: Democratic candidates — who have been more cautious about campaigning during the pandemic than Republicans — were forced into a slow start ahead of the March 1 primary as the Omicron wave made a winter’s worth of campaign events all but impossible. And the new voting law, Democrats say, has made voting by mail — a procedure widely embraced by the party in 2020 — much harder this year.

“There’s already a lack of voter enthusiasm because this year was supposed to feel so much better, and it hasn’t felt better,” said former Austin City Council Member Greg Casar, the progressive front-runner in the Democratic primary for the 35th Congressional District, an open seat that stretches from Austin to San Antonio.

The pandemic has continued to force Democratic candidates to adjust their campaign tactics.

Events are largely outdoors. When New York Rep. Alexandria Ocasio-Cortez visited Austin to campaign for Casar and Cisneros this month, attendees were required to show proof of vaccination or a negative Covid-19 test.

But most campaigns said they don’t want a repeat of 2020, when many Democratic candidates — including the party’s presidential nominee, Joe Biden — suspended all in-person activity, including door-knocking, for much of the election.

Casar, the favorite in the 35th District Democratic primary, which also includes state Rep. Eddie Rodriguez, said his campaign provides staffers with KN95 masks and offers paid Covid-19 leave. It requires masks at most events, even when they take place outdoors. But Casar said he has not dialed back the pace.

He said after running for re-election to the Austin City Council and working on a ballot initiative in 2020, largely relying on phone banks and virtual events, he has found that this year “people have been excited to have somebody knock on their door.”

“After such a difficult couple of years, I think people have been really energized by hearing a positive message. People in Texas have felt that their rights are constantly under attack — reproductive rights, voting rights being suppressed, that kind of environment,” Casar said.

Meanwhile, Democrats are also confronting the impact of the Republican-led voting law that targets urban areas and that elections experts say disenfranchises people of color most severely.

In addition to new ID requirements to vote absentee, the law, known as SB 1, makes it a crime for a public official to mail out absentee ballot applications to voters who haven’t requested them. SB 1 also takes aim at Harris County — home to Houston — which offered 24-hour early voting during the pandemic in 2020. The law limits early voting hours and bans drive-thru voting, another tool the county used.

The changes already have resulted in higher-than-usual rejection rates for absentee ballot applications. And some counties have begun to report new problems: Hundreds of mailed ballots flagged for rejection over ID requirements.

Voters also have to include a Texas identification number or a partial Social Security number when returning their mail-in ballots — despite having already provided similar identifying information when they applied for the ballot in the first place. If they have neither number, they must also indicate that.

In many major counties, nearly half of all mail-in ballots were being flagged for rejection at one point in mid-February.

Even more mail-in ballot applications were delayed after Republican Lt. Gov. Dan Patrick‘s campaign sent voters a mass mailing encouraging them to submit applications by following “three easy steps” — the third of which was returning the applications in an envelope marked to go to the Texas secretary of state, rather than to their local elections offices.
“This is a reason elections officials should be able to send mail ballot apps, as we did in Harris County before the state ban,” tweeted Lina Hidalgo, the Harris County executive, after reports emerged of the Patrick campaign’s error. “Leaving it up to campaigns — combined with the maze of technicalities under voter suppression laws — disenfranchises voters.”

Rathod, O’Rourke’s campaign manager, described the new law as “deliberate voter suppression” and said that so far, “it’s working exactly as Greg Abbott and the Republicans wanted it to work.”

“You’re seeing mail-in ballots being rejected,” he said. “The requirements are designed to be onerous and confusing, especially to newly registered voters, first-time voters, the elderly — you know, just about anyone that is trying to vote.”

Rathod said O’Rourke’s campaign has communicated with more than 3 million voters in February, which “shows you the ability that we have to engage with voters and fight this head-on.” O’Rourke is the rare Texas Democrat with statewide name recognition following recent unsuccessful bids for Senate and president.

Rathod also said the campaign has enlisted nearly 50,000 volunteers and is turning to that network to learn about hurdles Texans are encountering as they attempt to vote.

“We’ve been leveraging that,” Rathod said, “get feedback and an understanding of what’s happening with voters as it relates to these laws.”