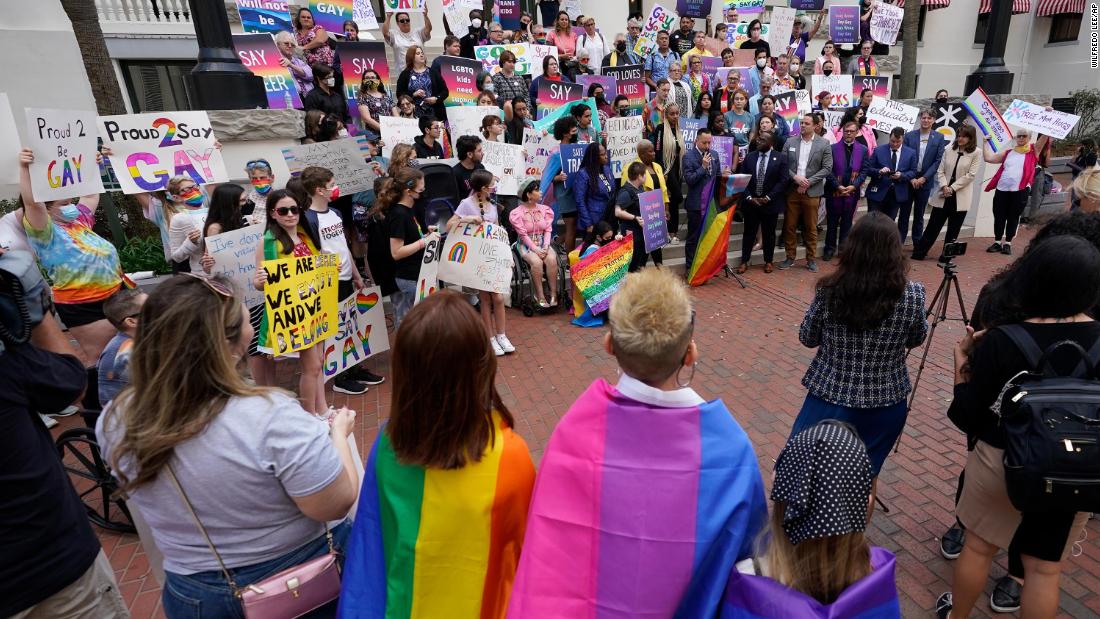 HB 1557, titled the “Parental Rights in Education” bill, was given final passage by Florida’s GOP-controlled legislature earlier this month. The law is set to take effect in July.

The legislation set off a social and political firestorm in Florida when it was introduced by Republican lawmakers in January. Its passage comes as conservatives around the country are pushing a host of bills that would further marginalize members of the LGBTQ community. DeSantis, a staunch conservative with a history of supporting anti-LGBTQ causes, previously approved legislation targeting LGBTQ Floridians, including an anti-trans sports ban last year.

“We will continue to recognize that in the state of Florida, parents have a fundamental role in the education, health care and well-being of their children. We will not move from that,” DeSantis, a Republican, said during Monday’s bill signing.

DeSantis’ move was met with immediate backlash from LGBTQ advocates, including the Trevor Project, a nonprofit organization that works on suicide prevention among LGBTQ youth.

“LGBTQ youth in Florida deserve better. They deserve to see their history, their families, and themselves reflected in the classroom, said Amit Paley, the group’s CEO and executive director, in a statement. “While I am saddened to see this harmful bill signed into law, I am inspired by the outpouring of support for LGBTQ students we have seen from parents, teachers, celebrities, and their peers. Social support is vital for suicide prevention, and I want to remind LGBTQ youth in Florida and across the country that you are not alone.”

The new law states that “classroom instruction by school personnel or third parties on sexual orientation or gender identity may not occur in kindergarten through grade 3 or in a manner that is not age-appropriate or developmentally appropriate for students in accordance with state standards.”

Conservatives argue that HB 1557 is needed in order to give parents greater oversight over what students learn and discuss at school, stressing that LGBTQ-related topics should be left for families to discuss at home. But opponents say that it would negatively impact an already marginalized community, pointing to data showing that LGBTQ youth reported lower rates of attempting suicide when they had access to LGBTQ-affirming spaces.

The law’s opponents have also decried a part of the legislation that allows parents to bring civil suits against a school district for any potential violation of its rules, saying it would open educators up to an endless barrage of litigation. The legislation has drawn scrutiny from Democrats in the state and elsewhere, including from President Joe Biden, who vowed earlier this year to protect LGBTQ youth from such measures.

“Every student deserves to feel safe and welcome in the classroom. Our LGBTQI+ youth deserve to be affirmed and accepted just as they are,” Biden tweeted Monday. “My Administration will continue to fight for dignity and opportunity for every student and family — in Florida and around the country.”

In addition, the new law would require districts to “adopt procedures for notifying a student’s parent if there is a change in the student’s services or monitoring related to the student’s mental, emotional, or physical health or well-being,” something LGBTQ advocates argue could lead to some students being outed to their parents without the student’s knowledge or consent. Advocates also fear the law would restrict students’ ability to speak confidentially with school counselors — some of whom are a student’s sole resource for mental health services.

Opponents have also pointed to research from the Trevor Project. The group said in a statement last month that “LGBTQ youth who had access to spaces that affirmed their sexual orientation and gender identity — including schools — reported lower rates of attempting suicide than those who did not.”

Opponents of HB 1557 spent much of this year mobilizing against it, with Gen Z advocates being some of its most visible objectors.

Students have for weeks led major demonstrations and school walkouts in protest of the legislation. Earlier this month, more than 500 students participated in a massive walkout at Winter Park High School in Orange County.

Meanwhile, Disney, which employees 75,000 people in Florida, also found itself in the middle of the controversy surrounding the legislation after its CEO, Bob Chapek, bungled the company’s response to it in early March.

Chapek later apologized to his LGBTQ employees, telling them, “You needed me to be a stronger ally in the fight for equal rights and I let you down. I am sorry.”

On Monday, Disney stated that its goal is for the law to be repealed by the legislature or struck down in the courts, according to a statement from a company spokesperson.

The company said it was “dedicated to standing up for the rights and safety of LGBTQ+ members of the Disney family, as well as the LGBTQ+ community in Florida and across the country.”

At least one LGBTQ rights group has threatened legal action against the legislation.

“Let us be clear: should its vague language be interpreted in any way that causes harm to a single child, teacher, or family, we will lead legal action against the State of Florida to challenge this bigoted legislation,” Equality Florida, the state’s leading LGBTQ advocacy organization, said in a statement earlier this month.

CNN’s Steve Contorno and Rachel Janfaza contributed to this report.