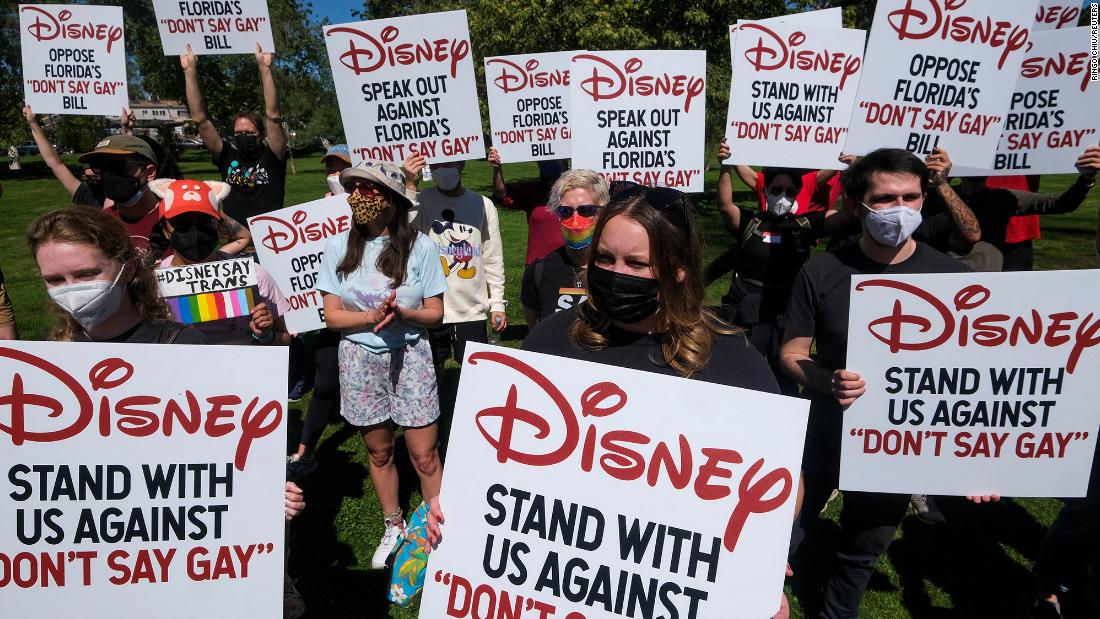 While many employees at Disney headquarters in Burbank, California, did protest, it did not appear to be a massive showing across the company.

“We know how important this issue is for our LGBTQ+ employees, their families and allies, we respect our colleagues’ right to express their views, and we pledge our ongoing support of the LGBTQ+ community in the fight for equal rights,” a Disney spokesperson told CNN Business.

“To ALL who come to this happy place, welcome,” Disney Parks posted on its Instagram Tuesday morning, echoing the words of Walt Disney during his dedication speech at Disneyland’s opening day in 1955. “Disney Parks, Experiences and Products is committed to creating experiences that support family values for every family, and will not stand for discrimination in any form.”

The post, which included a photo of rainbow colored Mickey Mouse ears, said that the unit opposes “any legislation that infringes on basic human rights, and stand in solidarity and support our LGBTQIA+ Cast, Crew, and Imagineers and fans who make their voices heard today and every day.”

Earlier this month, Disney CEO Bob Chapek spoke about the bill in a note to employees but refused to directly condemn it publicly. Instead, Chapek said Disney’s continuing to tell “diverse stories” is a more appropriate response to the legislation, which prohibits teachers from discussing LGBTQ+ issues with children in third grade and below.
Chapek’s statement created a furor inside of Disney and out, forcing the CEO to apologize for his tepid response and leading to organized walkouts by Disney employees. Disney employs 75,000 workers in Florida.
Another notable Disney brand, ESPN, also conveyed its solidarity on the issue with a Twitter thread Tuesday morning.

“ESPN believes in inclusivity and denounces legislation and actions across the United States that infringe on any human rights. We stand with our LGBTQIA+ colleagues, friends, families, and fans,” the account said. “We’ll continue to partner with organizations that support the LGBTQIA+ community, be accountable where we fall short of expectations, and never stop telling stories about LGBTQIA+ athletes.”

The official Twitter account for Disney+ streaming service added that it “stands by our LGBTQIA+ employees, colleagues, families, storytellers, and fans.”

“We strongly denounce all legislation that infringes on the basic human rights of people in the LGBTQIA+ community — especially legislation that targets and harms young people and their families,” the tweet read.

Disney+ added that it strives to create a service that “reflects the world in which we live.”

“Our hope is to be a source for inclusive, empowering, and authentic stories that unite us in our shared humanity,” it read.

These aren’t the first statements like this to made online by units of the company. Marvel Studios and Pixar took to social media after the initial backlash to voice support for LGBTQ+ rights by saying they stand with the community.

As for the parent company itself, Disney hosted an online meeting with all its units Monday on the topic.

“This morning we held a virtual company-wide conversation on anti-LGBTQ+ legislation and Disney’s response to it,” the company told CNN Monday. “We know how important this issue is for our LGBTQ+ employees, their families and allies, we respect our colleagues’ right to express their views, and we pledge our ongoing support of the LGBTQ+ community in the fight for equal rights.”

CNN’s Leyla Santiago and Gregory Lemos contributed to this report.