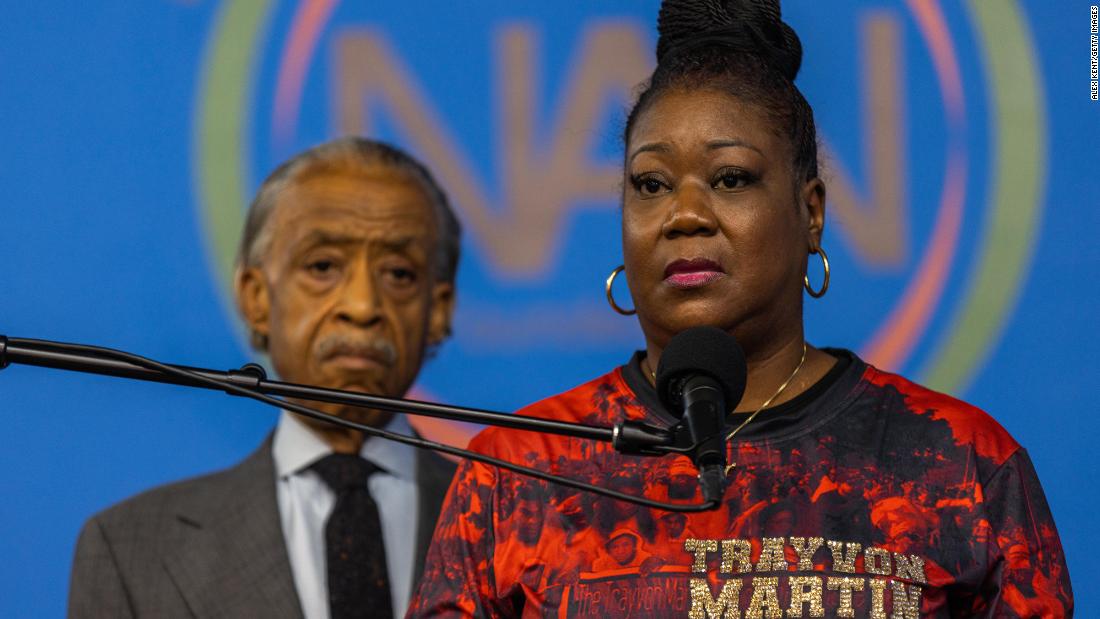 “If you don’t do anything else, don’t give up. That’s my message, don’t ever give up. Ten years later, and I’m still standing strong,” Fulton said at a Saturday morning event in New York City accompanied by Mayor Eric Adams, the Rev. Al Sharpton, City Council Speaker Adrienne Adams and other city leaders.

Fulton shared the pain of losing her son on February 26, 2012. Martin, a Black high school student, was fatally shot by 28-year-old George Zimmerman, a neighborhood watch captain in Sanford, Florida, where the teenager was visiting his father.

“So, a lot of people talk about Trayvon Martin’s story. It’s not a story for me, it’s a tragedy, because the story has a beginning and an ending. There is no ending for what I carry in my heart,” Fulton said.

Martin was walking back to the home of his father’s fiancée after buying a snack from a nearby 7-Eleven when he encountered Zimmerman, who called 911 to report a “suspicious person” in the neighborhood.
Zimmerman was told not to get out of his SUV or approach the person, but he disregarded the instructions and followed Martin, who was unarmed. An altercation took place and Martin was fatally shot.

Zimmerman was charged with murder in Martin’s death but he was acquitted at trial after claiming self-defense. The gunshot came from Zimmerman’s handgun and the bullet went into the teen’s left chest and lodged there.

“When you carry a child for nine months and you see your heart walking outside of your body, you never lose that love,” Fulton said at the event on Saturday. “And I repeat all the time, not even the death of my son will separate me from the love of my son, and I mean that.

Adams spoke about the tragic and widespread impact of Martin’s death and stressed the importance of continuing the fight for equality.

“We need to stand our ground as we fight for all the issues that we have known have historically impacted our communities,” Adams said. “There is no tragedy in the mind of so many when a 17-year-old Black boy is killed, but we must stand our ground and say it does matter.

“We must stand our ground as we fight to ensure that we don’t continue to see these laws that are put in place and define people based on their gender, their ethnicity, based on their lifestyle, and who they are,” the mayor continued.

Fulton marked the anniversary by imploring community efforts to hold people accountable for the death of their loved ones.