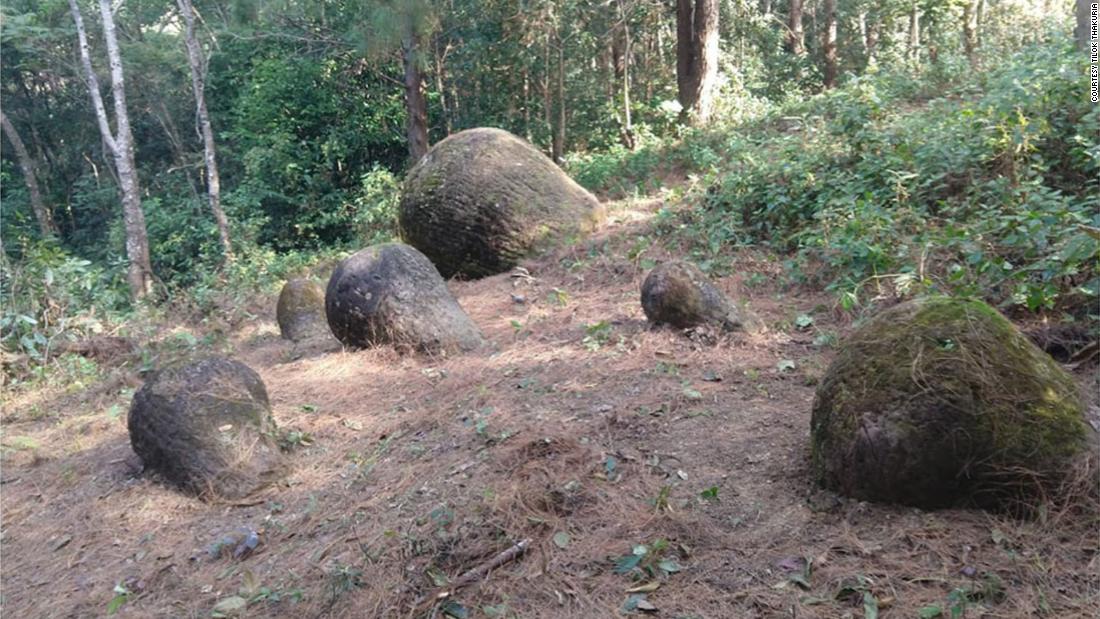 The stone jars range from 1 to 3 meters (about 3.2 to 9.8 feet) tall, according to study coauthor Nicholas Skopal, doctoral candidate at Australia National University in Canberra.

Some of the jars feature decorative carvings, while others are plain, he said. Around 65 jars have been discovered so far, but many more could be lurking beneath the ground, according to Skopal.

Researchers have yet to unravel the mystery of when these jars were made and which civilization used them, he said.

A handful of sites in the region with the same stone jars were discovered by the British in the 1920s, and prior to Skopal’s 2020 excavation, there were seven known sites. His team was analyzing jars found at three of the locations.

While exploring the surrounding areas, they stumbled across four previously unknown sites with partially exposed jars, which was a pleasant surprise, Skopal said.

“By going out, surveying and documenting them properly, the government and universities can manage their heritage a lot better and preserve these jars for future generations,” Skopal said.

A history of looters

By the time the research team found the exposed jars, most of their contents were long gone, Skopal said.

There are oral historical accounts of the Naga, local villagers, pulling beads and other items out of the jars, he said. While it’s not known precisely when the beads were removed, since some of the locals still have them as family heirlooms, it’s likely they unearthed the jars not too long ago, Skopal added.

“In one of the villages we’re staying in, one of the elderly ladies actually showed me (some jewelry) that had been pulled out of the jar,” he said.

Similar jars have been discovered in Laos, and researchers there have been fortunate to find jars that were still intact with artifacts like beads and human remains inside, Skopal said. He is hoping his team will eventually find unopened jars at the new sites in Assam to study the culture they originated from.

“Some of the buried ones might have things still inside, but we haven’t excavated yet,” he said.

It is difficult to date when these jars were first created, so researchers are not yet able to determine which civilization crafted the stone jars, Skopal said.

Early estimates date the artifacts to 400 BC or earlier, according to lead study author Tilok Thakuria, assistant professor in the History & Archaeology Department at the North-Eastern Hill University Tura Campus in Meghalaya, India.

Nailing down the time period in which these jars were created is the team’s next priority, Skopal said.

To determine when the artifacts were buried, his team plans to use optically stimulated luminescence, called OSL. This is a dating method where you take a sediment sample from directly underneath the jar and determine when light last hit that sample, Skopal said.

Unearthing unopened jars will also be a big help in dating the stone pieces, according to Thakuria.

“We need to have a plan for excavation in Assam to recover material culture and to reconstruct social and cultural behavior of these groups of people,” he said.