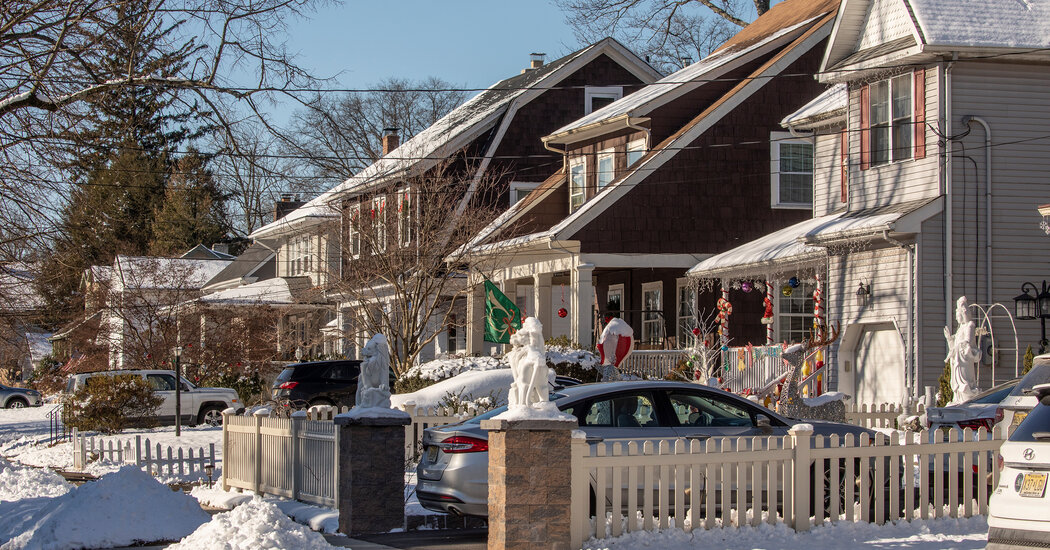 When Dean Mehmood decided it was time to move his family out of Brooklyn, where his parents had been renting for 35 years, he took them on a driving tour of central New Jersey, looking for a place that was affordable and welcoming. He found it in the one-square-mile borough of Dunellen, in Middlesex County.

“There was something that was calling my mother to this area, and to this house,” said Mr. Mehmood, a 27-year-old R&B singer, of the home he bought in December for $327,000. “She just had to have it.”

“This is their first house. It’s a big deal,” he said of the two-bedroom, two-and-a-half-bath 1940s ranch house that he now shares with his 60-year-old retired parents, Tariq and Asia, and his younger brother. “When we signed the papers and got the keys, the first thing my mom said to me was, ‘I didn’t think I’d live to see the day I’d own my own house.’”

Tucked between larger and better-known communities like the Brunswicks and the Plainfields, Dunellen feels like a mid-20th-century throwback, with its square central park and busy train station, surrounded by churches and one-of-a-kind shops that have been there for decades. But that image is about to change, with a long-awaited development project soon to open.

“We have a small-town quaintness, but there’s also a new energy in town,” said Mayor Jason Cilento, 32, who grew up in the borough. “A lot of houses are older, with wraparound front porches. It’s affordable to get in, and to live here, but it’s also an investment in the future.”

Besides Dunellen’s affordability, another draw for families like the Mehmoods, who are Pakistani American, is the area’s diversity, which Mr. Mehmood said was “like being in Brooklyn.” In fact, fewer than half of the borough’s 7,600 residents are white, according to the 2020 census; 32 percent are Hispanic, 12 percent are Black and 7 percent are Asian.

Grace Cordero also found Dunellen welcoming when she and her husband, Samuel Cordero, moved there in 2011 from neighboring Piscataway, buying a four-bedroom ranch house for $250,000.

To illustrate the borough’s sense of community, she described what happened last summer when a nearby house caught fire. “We all went down to help. People came back with wagons of food and clothing and shoes,” said Ms. Cordero, 40, a human resources manager for a fire protection services company. “That’s how it is here. Everybody helps each other, and it doesn’t matter who you are or where you’re from.”

Moving to Dunellen has had a similar effect on Jeremy Rettig. For many years, Mr. Rettig, 34, a single father and longtime renter, didn’t see the appeal of buying a home. But when he decided to leave his apartment in New Brunswick, N.J., in 2020, he found a 1917 Craftsman-style house in Dunellen that he said was “so unique I had to buy it.”

Since closing on the three-bedroom house that August for $310,000, he has joined the downtown management committee and participated with two of his three daughters in the borough’s communal garage sale. Owning his own home in Dunellen, said Mr. Rettig, an insurance adjuster, “did something for me emotionally — it grounded me.”

He added: “It was a different feel, like I was part of a community. I’m surrounded by people who are good-hearted and good-willed, who look out for each other.”

Situated about 35 miles southwest of Manhattan, Dunellen is bounded by Green Brook to the north, with Bonnygutt Brook running through the southern part of the borough. It is bisected by Route 28 and New Jersey Transit’s Raritan Valley Line; the Dunellen train station marks the heart of the small but bustling downtown.

Radiating out from the center are residential neighborhoods with small colonials, Cape Cods, ranches and split-levels, most on lots of less than a fifth of an acre. Larger colonials with more land can be found on a few streets.

Because Dunellen is in a valley — between two brooks that overflow during big storms like last September’s Hurricane Ida — about a quarter of the 2,189 homes are in FEMA-designated flood zones.

Barbara Seif, a broker with ERA Boniakowski Real Estate who has lived in the borough nearly all of her 73 years, said that used to be more of a disincentive for potential buyers. “When people are buying a house here, the first thing they ask is, ‘Does it need flood insurance?’ It used to discourage people, but since Covid hit, it doesn’t seem to matter,” said Ms. Seif, who described Dunellen’s housing market as “very tight.”

But the tight market may be about to loosen up, with the anticipated opening this summer of the initial phase of Dunellen Station, a $105 million mixed-use project that will bring the first new housing to Dunellen in several decades. Near the train station, on a 20-acre site formerly occupied by a printing factory, the project will add 252 rental apartments, 130 townhouses and 9,200 square feet of retail space to the borough’s downtown.

Robert Fourniadis, a senior vice president for Prism Capital Partners, the developer of the apartment and retail spaces, called Dunellen “a diamond in the rough.”

“It’s a charming little town in a great location,” he said.

At present, housing inventory is almost nonexistent in Dunellen, Ms. Seif said, with no available rentals and a handful of homes for sale; as of mid-January, these included a two-bedroom colonial listed for $259,900 and a new four-bedroom house listed for $724,900.

The 19-acre Washington Memorial Park, in the heart of downtown, hosts recreational activities and outdoor summer concerts, along with the high school’s annual graduation ceremony.

A block away, at Dunellen Hotel, is the popular Rathskeller, where patrons can sit beneath hand-hewn beams and order a craft beer or a lobster Reuben sandwich. Across Washington Avenue, at Planet Chicken, there’s Peruvian chicken on offer. And until recently, Dunellen Cinema Cafe on North Avenue allowed customers to dine while watching a movie; the theater closed last year, a victim of Covid and Hurricane Ida, but the pub, Zupko’s Tavern, remains open for pitchers and pizza.

Also on North Avenue is Lily Yip Table Tennis Center, which has hosted Olympic Ping-Pong players and is a popular spot for hosting parties. Four doors down is the equally popular Eight on the Break, a pinball-and-billiard hall that opened in 1973 and is home to the New Jersey Pinball League, holding weekly tournaments.

John P. Faber School serves students in prekindergarten through fifth grade. They move on to Lincoln Middle School for sixth through eighth grades, and then to Dunellen High School.

The high school has just 360 students, making it more like a private school, with nine Advanced Placement classes and numerous extracurricular activities. The average SAT scores for the 2019-20 school year were 547 in reading and writing and 534 in math, compared with state averages of 536 in each. High school students can participate in a dual-degree program at Middlesex College, or can apply to one of the county’s vocational or technical high schools.

New Jersey Transit offers train and bus service to and from Dunellen. The train ride to Penn Station in Manhattan takes about an hour and 10 minutes; direct service is available from 10 a.m. to 2 p.m., and a switch in Newark is required at other times. Tickets cost $12.25 one way, or $353 for a monthly pass. The 113 and 114 buses make the trip from South Washington Avenue to the Port Authority in Manhattan in about an hour and a half; one-way tickets are $10.75 and a monthly pass is $267.

In 1925, having outgrown its Manhattan location, the Art Color Printing Company moved to Dunellen, drawn by the easy transportation access. With 1,100 employees at its peak, the factory printed 10 million magazines a month, including titles like True Romance, True Detective Mysteries and Modern Screen. In 1931, W.F. Hall Printing Company of Chicago bought the controlling interest of the business, and continued operating until 1968. It is now the site of the Dunellen Station housing development.