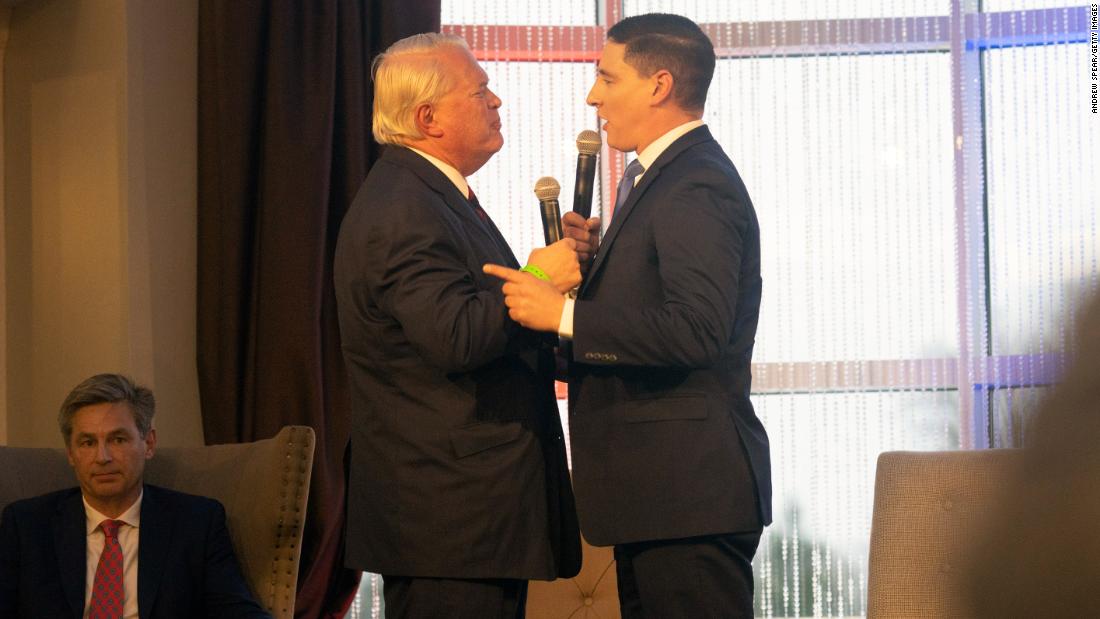 The Mandel ad features a direct-to-camera appeal from Sheila Nowacki, the mother of a Marine who was killed in Iraq in 2005. Before urging people to vote for Mandel in the name of “God and country,” Nowacki said: “Mike Gibbons has the nerve to say military service doesn’t count as real work. Marines like Josh Mandel, like my son Andy, risked their lives for our country. Their work is so much more important than Gibbons just making millions for himself.”

Those last two “you don’t know squat” comments, in which Gibbons didn’t specify he was talking “about jobs,” could perhaps be taken as belittling the knowledge people acquire by serving in the military. But the economic context seemed clear from Gibbons’ previous remarks. Regardless, there was certainly no claim from Gibbons that Mandel hadn’t worked at all.

In other words: Mandel inaccurately described Gibbons’ comments when confronting him in the moment, then proceeded to turn his inaccurate description into a scripted attack ad.

The Gibbons campaign released its own ad that correctly calls Mandel’s attack false. The Gibbons ad features a Marine veteran, Sgt. Jeremy Gons, saying Mandel is “lying” that Gibbons doesn’t respect military service. Gons added that Mandel made the false attack “the very week” Gibbons’ son, a Navy pilot, “was deployed overseas.”
Gibbons also released a video message in which he said he has “nothing but respect for those who have served,” discussed his son’s deployment, and said that while Mandel’s military service is honorable, “you shame yourself” by trying to use it to “lie” to voters.

“How dare you, Josh? I said you had never had a job in the private sector. It’s right there on tape,” Gibbons said.

Mandel, now 44, enlisted in the Marine Corps Reserve in 2000. He served for eight years and deployed to Iraq in 2004 and 2007.
In 2003, at age 26, Mandel was elected as a city councilman. He was elected as a state representative in 2006 and 2008, then as state treasurer in 2010 and 2014. He ran for the US Senate in 2012 and 2018, losing in the general election in 2012 and citing a family health issue when he dropped out of the primary in 2018.
False claims have featured prominently in Mandel’s 2022 campaign to fill the Senate seat that is being vacated by retiring Republican Sen. Rob Portman. One of Mandel’s regular applause lines is that the 2020 election was “stolen from Donald J. Trump.”
Gibbons, too, has made false claims about the 2020 election. CNN published a Wednesday fact check on two false election claims Gibbons uttered at debates in late March.