Real estate services platform Fathom Holdings Inc. grew fourth quarter revenue by 79 percent from a year ago, to $95.5 million, as the company continued to expand its real estate, mortgage and technology businesses through organic growth and acquisitions, according to fourth-quarter and full-year earnings.

Fathom Realty grew its agent headcount by 48 percent last year, to 8,100 agents, and those agents completed 10,800 transactions during the last three months of 2021, a 43 percent uptick from last year, according to earnings issued Tuesday.

“Fathom is winning through innovation and consistent growth, and by delivering real, long-term value to our agents, employees, clients, and shareholders,” Fathom CEO Josh Harley said in a statement. “We believe Fathom is on track to continue our strong revenue, agent and transaction growth, and with the strategic investments we are making in each of our business lines, we look forward to demonstrating profitability in the near future.”

The investments the company is making in future growth, plus operational and overhead costs related to its many acquisitions, meant that expenses and net losses were also on the rise.

Fathom Realty, which offers agents a scalable, flat-fee, 100 percent commission structure, generated more than 95 percent of Fathom’s 2021 revenue, or $314.4 million. That number is likely to go up this year, not only due to the brokerage’s increasing agent count, but because those agents will be paying higher fees.

On Jan. 1, Fathom revised its commission structure for agents, increasing annual fees by 20 percent to $600, and transaction fees by 11 percent, to $500. After agents have completed 12 transactions, the transaction fee drops to $99.

“We have done extensive market research and are confident that our compensation plans remain highly competitive and attractive to our current, as well as future agents,” Harley said in announcing the increase in December.

On a call with investment analysts Tuesday, Harley said the new commission structure haven’t hurt agent retention or growth, “most likely because our average agents are still saving around $12,000 or more [in commission splits] as compared to traditional brands.”

With home sales expected to cool this year due to scarce inventory and rising prices and interest rates, Fathom’s commission structure could help it attract more agents.

“Fathom offers real estate agents who join Fathom from other brokerages the ability to net more income than they did in 2021, even if they sell fewer homes, and that’s important,” Harley said. “That could result in more agents joining Fathom if they begin to feel the squeeze. In other words, Fathom could further accelerate our growth, while other brokerages struggle.” 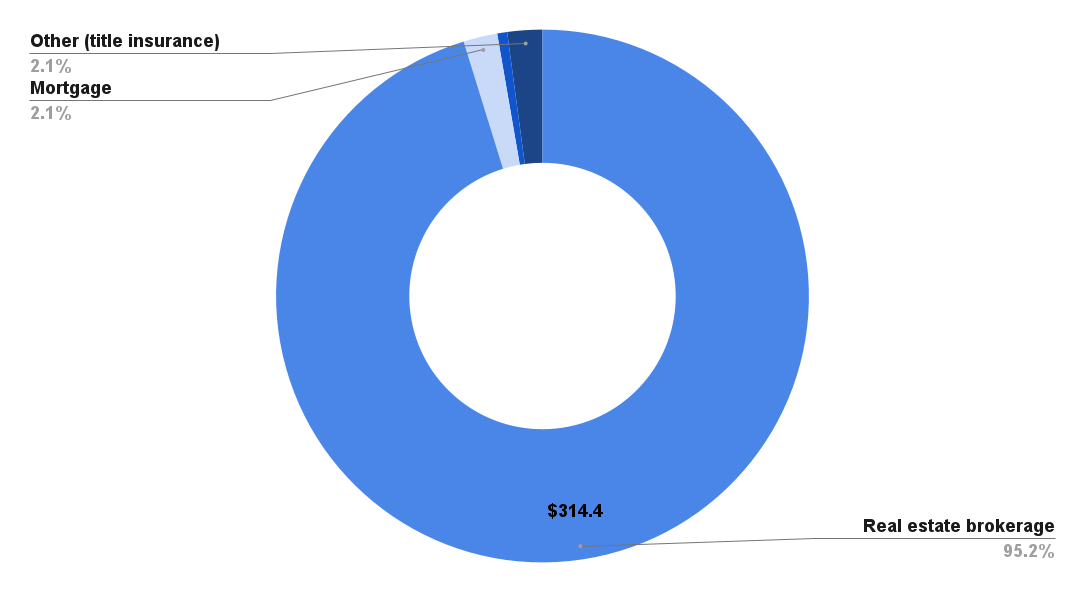 After real estate brokerage, mortgage is Fathom’s next biggest source of revenue, generating $6.8 million in cash flow in 2021. Fathom got into the mortgage business in April with the $26.75 million acquisition of E4:9 Holdings and its three operating subsidiaries, Encompass Lending Group, Dagley Insurance Agency and Real Results.

Mortgage revenue is also likely to grow in 2022, thanks to last month’s acquisition of Washington, D.C.-based Cornerstone First Financial, which is licensed to do business in California, Colorado, Florida, Georgia, Maryland, Pennsylvania, Virginia and Washington, D.C.

In February Fathom made the most of those acquisitions, rolling out intelliAgent 2.0, with the aim of simplifying brokerage operations and agent transaction management. New features include an enhanced CRM system, and new marketing resources for building and customizing personalized websites, sending video messages and launching multiplatform marketing campaigns.

This year, Fathom returned its focus to acquiring smaller real estate brokerages in new markets, launching operations in Montana and New Hampshire and acquiring iPro Realty Network, a 435-agent brokerage based in Utah. Fathom Realty is now licensed in 36 states and Washington, D.C., with plans to open several more markets in the coming months, Harley said.

“With the addition of our own in house mortgage title, and insurance companies, along with additional SAAS (software-as-a-service) offerings, we now have the potential to dramatically increase our revenue and importantly, our profitability per transaction,” Harley said on Tuesday’s call. “I want to reiterate that these companies are not joint ventures — we fully own them. That means that we’re not giving up any of the revenue and profitability generated by these businesses.”