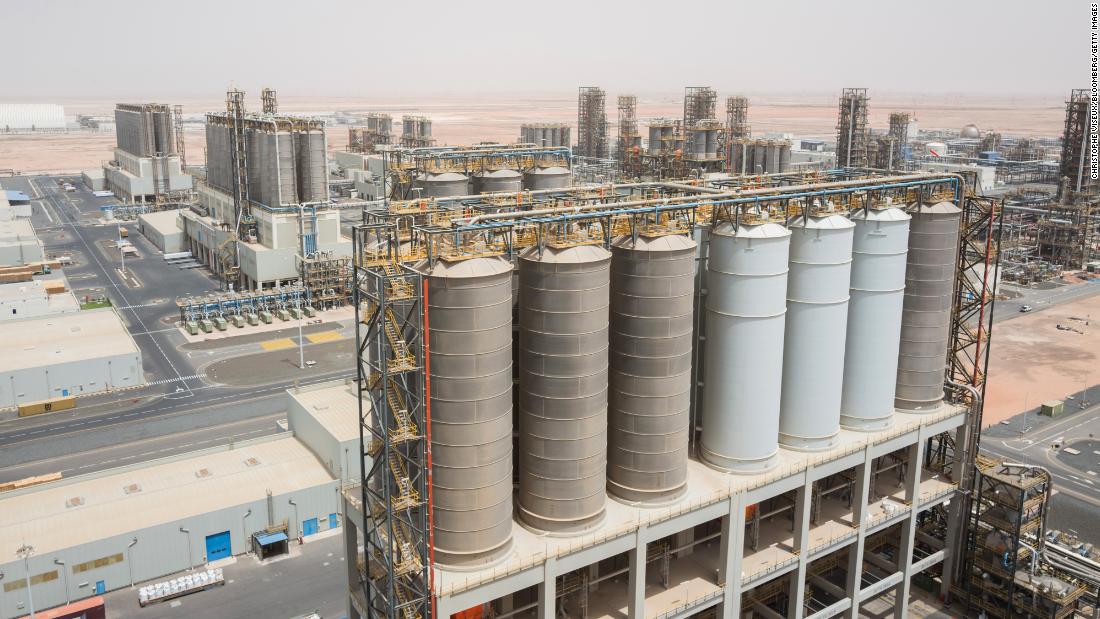 The UAE’s ambassador to Washington, Yousef Al Otaiba, told CNN Wednesday that the country wants to increase oil production and will encourage the Organization of the Petroleum Exporting Countries (OPEC) cartel to ramp up supply.

Otaiba’s comments sent oil prices dropping like a rock Wednesday. US oil fell 12% to $108 a barrel. Brent crude, the global benchmark, fell 13% to $112 a barrel.

If the UAE convinces its partners to turn on the spigots, it would mark a turnaround for the cartel, which at its meeting last week with allied producers — a group known as OPEC+ — agreed to stick with a plan of gradually adding oil to the market, defying pressure from developed economies to do more to ease prices.

A key problem for the Saudi-led group: Russia is one of those allied producers.

Last Wednesday, OPEC+ said in a statement that it would increase output by 400,000 barrels per day in April — a small fraction of Russia’s 10 million barrels per day crude oil production. The cartel had called the market “well-balanced,” despite oil prices having shot up 30% in the past two weeks.

“The UAE cracked. They were one of the last holdouts,” Robert Yawger, vice president of energy futures at Mizuho Securities, told CNN. “Now that they said it, you can expect the Saudis will say the same thing.”

The Biden administration banned imports of Russia’s crude and natural gas Tuesday, but Europe, which receives a great deal more Russian energy than the United States, has not. Still, sanctions on Russian banks and concerns about the ability to ship its oil have led to a shadow ban on the country’s energy industry, drastically reducing the amount of Russian oil supplied to the global market.

The West has been hopeful it could add oil from other sources, including from OPEC members Iran and Venezuela.

Before sanctions were applied on Iran, it produced about 4 million barrels per day. But the United States’ return to a nuclear deal with the country has proven elusive. The United States has also begun discussions with Venezuela, whose crude was sanctioned in 2019. But the economically crippled South American country wasn’t producing much oil even before the ban.

OPEC, by contrast, has the ability to quickly ramp up supply as Saudi Arabia and the UAE have spare production capacity.

“We favor production increases and will be encouraging OPEC to consider higher production levels,” Otaiba said.

The UAE Ministry of Energy has not released a statement, but Otaiba’s comments were subsequently tweeted by the country’s embassy in Washington. It marks the first hint that an OPEC nation may be willing to keep oil prices from rising out of control. Some economists fear that drivers, air travelers and businesses could start to change their purchasing behavior if oil rises much further, potentially damaging the global economy.

“The UAE has been a reliable and responsible supplier of energy to global markets for more than 50 years,” Otaiba said, “and believes that stability in energy markets is critical to the global economy.”

Europe would no longer rely on Russia

The change in tune from OPEC may come from its sense of a unique opportunity. It could wean Europe off Russian oil and keep them buying OPEC crude.

“The UAE is essentially saying to Saudi Arabia and Kuwait, ‘Let’s use our spare capacity so that Europeans no longer have to rely on Russia,'” said Andy Lipow, president of consulting firm Lipow Associates.

“This is a 180-degree turnaround,” said Lipow, referring to the market’s interpretation of OPEC’s stance.

Lipow added that OPEC leaders are likely remembering what happened in 2008 when oil skyrocketed above $145 a barrel, only to crash months later when the world economy collapsed amid the financial crisis.

“You can turn the world into a recession,” said Lipow.

The sharp decline in oil prices improves the outlook for prices at the pump. The national average rose to a record $4.25 a gallon on Wednesday, up by a staggering 60 cents in one week, according to AAA.

Instead of hitting $4.50 a gallon, Lipow said current oil prices suggest the national average could top out around $4.35 a gallon.