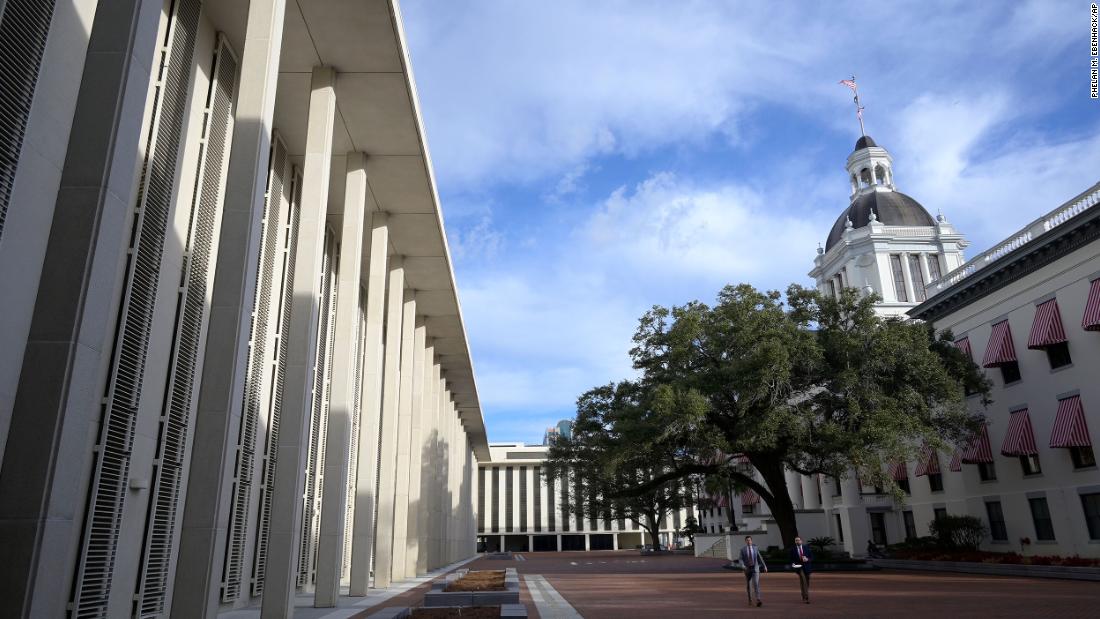 Conservatives have argued that the bill is needed in order to give parents greater oversight over what students learn and discuss at school, stressing that LGBTQ-related topics should be left for families to discuss at home.

Opponents, however, have dubbed it the “Don’t Say Gay” bill, arguing the ban it creates would negatively impact an already marginalized community. They’ve pointed to data showing that LGBTQ youth reported lower rates of attempting suicide when they had access to LGBTQ-affirming spaces.
The bill’s opponents have also decried a part of the legislation that allows parents to bring civil suits against a school district for any potential violation of its rules, arguing it would open educators up to an endless barrage of litigation. The legislation has drawn scrutiny from Democrats in the state and elsewhere, including from President Joe Biden, who vowed last month to protect LGBTQ youth from such measures.

If signed by DeSantis, the bill would take effect in July.

DeSantis, a staunch conservative who has a history of supporting anti-LGBTQ measures in the state, said in February that it was “entirely inappropriate” for teachers and school administrators to have conversations with students about their gender identity, though he also acknowledged, “I don’t think it’s happening here in large numbers.”

The bill states that “classroom instruction by school personnel or third parties on sexual orientation or gender identity may not occur in kindergarten through grade 3 or in a manner that is not age-appropriate or developmentally appropriate for students in accordance with state standards.”

In addition, the measure would require districts to “adopt procedures for notifying a student’s parent if there is a change in the student’s services or monitoring related to the student’s mental, emotional, or physical health or well-being,” something LGBTQ advocates argue could lead to some students being outed to their parents without the student’s knowledge or consent. Advocates also fear the bill would restrict students’ ability to speak confidentially with school counselors — some of whom are a student’s sole resource for mental health services.

More than a dozen attempts by members of the Florida Senate to amend the bill on Monday failed, despite emotional pleas from some Democrats, including state Sen. Shevrin Jones, who brought some senators to tears as he spoke about his experience as a gay Floridian. State Sen. Jeff Brandes, a Republican, offered an amendment that would have broadened the legislation to prohibit all instruction of any sexual topics in an attempt to eliminate concerns from LGTBQ advocates that the bill stigmatized members of the community, but it failed.

During Monday’s debate, the bill’s Senate sponsor, Republican state Sen. Dennis Baxley, said that he was concerned that kids are “experimenting” with sexual orientation and that was part of his motivation for the legislation. The bill’s co-sponsor in the Florida House, Republican state Rep. Joe Harding, previously told CNN that the bill is meant to deter school staff from inquiring about a student’s gender identity or pronouns without including their parents in the conversation.

Harding had said that he’d heard a few instances of parents complaining that school staff were discussing gender identity with their children without their input, though he didn’t get into specifics of where in the state such instances occurred.

After “Saturday Night Live” poked fun at the bill, Christina Pushaw, the governor’s spokeswoman, posted on Twitter that anyone who opposes the bill is “probably a groomer,” in essence smearing those who’ve raised concerns about the bill as sexual predators. Her comments harken back to debunked arguments used by anti-gay activists in recent history to smear and marginalize members of the LGBTQ community.

Opponents of the measure have pointed to research from the Trevor Project, a nonprofit organization that works on suicide prevention among LGBTQ youth. The group said in a statement last month that “LGBTQ youth who had access to spaces that affirmed their sexual orientation and gender identity — including schools — reported lower rates of attempting suicide than those who did not.”

Students in Florida have been among some of the bill’s loudest opponents, with several high schools across the state having held walkouts in recent days in protest of the bill.

“We wanted to show our government that this isn’t going to stop. There were walkouts all last week. This is going to continue. If this passes, there will be protests everywhere,” Will Larkins, a junior who helped organize a walkout at Winter Park High School in Orange County, told CNN on Monday.