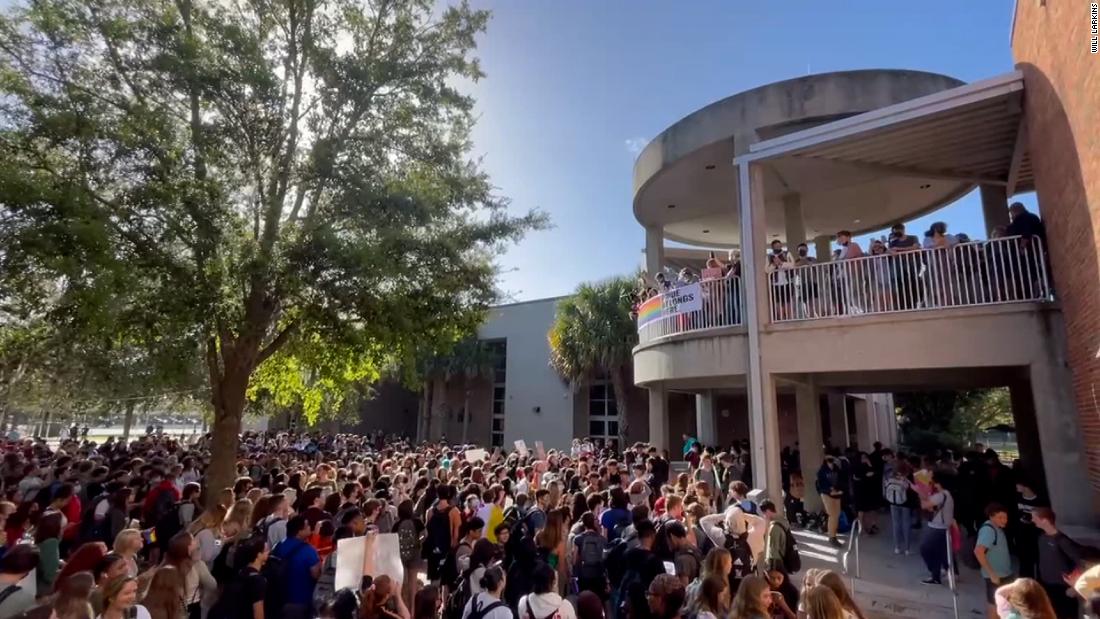 The Parental Rights in Education bill, HB 1557, would effectively ban teachers from discussing sexual orientation and gender identity in classrooms for young students. LGBTQ advocates say the measure would lead to further stigmatization of gay, lesbian and transgender children, causing more bullying and suicides within an already marginalized community.

The walkout was organized by juniors Will Larkins and Maddi Zornek. Several students left class at 9 a.m. ET to protest the bill. During the walkout, students were chanting, “We say gay!” and holding “protect trans kids” signs.

Winter Park High’s walkout was not the first act of protest among Florida students. Several high schools across Florida also held walkouts in protest of HB 1557 on Thursday and Friday.

“We wanted to show our government that this isn’t going to stop. There were walkouts all last week. This is going to continue. If this passes, there will be protests everywhere,” Larkins told CNN. “We wanted to get the attention of our representatives, our senators, because the point is to show them that we are the ones in powers. The people are the ones in powers and what they’re doing doesn’t represent us, especially marginalized groups.”

Larkins also testified against the bill in front of the Florida Senate Appropriations Committee last week.

The bill passed the Florida House of Representatives in February with a 69-47 vote. The Republican-controlled Senate advanced the bill this week, which could set the stage for a final vote as soon as Tuesday.

Amid the debate on the Senate floor Monday, the bill’s sponsor, Republican Sen. Dennis Baxley, said his concern that children are “experimenting” with sexual orientation was part of his motivation for this legislation.

Gov. Ron DeSantis, a Republican, has signaled his support for the bill. If approved by the Florida Senate and signed by DeSantis, HB 1557 would go into effect in July.