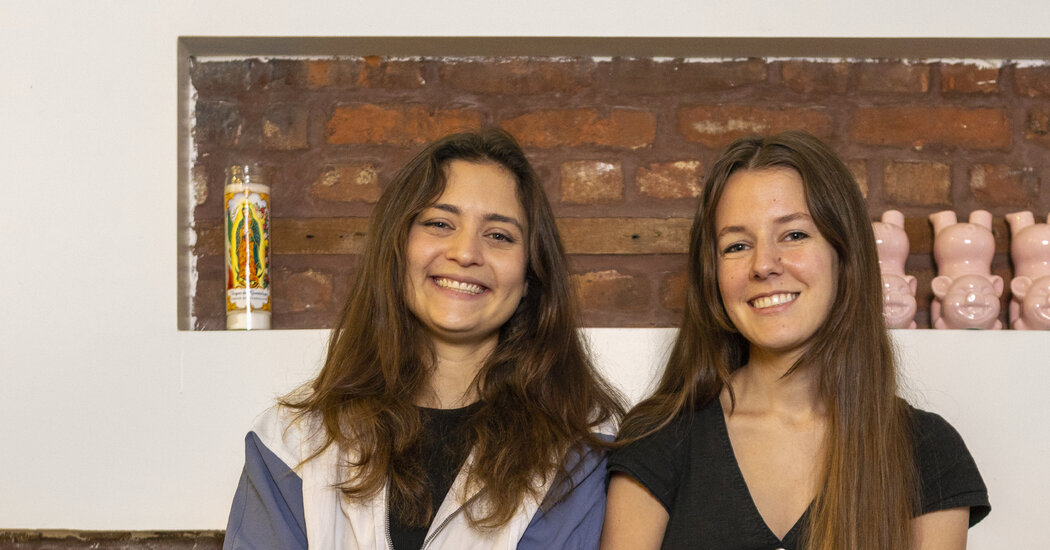 “One of the hardest parts about moving to New York,” Ruthie Landry said, “is finding out about renters’ rights.”

For Ms. Landry, 27, Covid-19 accelerated the learning process. Along the way there were plenty of discoveries — and the biggest came at the end of her journey.

Just a week into the pandemic, one of her two roommates announced that she was leaving the city. This meant that Ms. Landry and her other roommate, Dana Schulman, had a three-bedroom in Williamsburg, Brooklyn, that they couldn’t afford. The departing roommate agreed to pay her share of the rent until the lease was up, but renewing at the same rate was out of the question.

Ms. Landry and Ms. Schulman were relatively new to the city, less than two years out of Johns Hopkins University. They met through a local sorority when Ms. Schulman, a year behind Ms. Landry in school, made a campus visit as a high school senior. “Originally, I slept on her floor,” she said. “Now I’ve worked my way up to my own bedroom.”

They didn’t contemplate leaving the city when the pandemic began. They shared a commitment to staying, but knew that doing so would require a dramatic reduction in rent, or a new apartment.

Then came a moment of clarity.

Their apartment had a window that looked out onto an air shaft, and across the way they had a clear view of several other units in the building. They could see that many of them were empty. “It felt kind of sneaky,” Ms. Landry said, making Ms. Schulman laugh. “But we figured most of the building was empty and realized the cards were stacked in our favor in this weird, crazy moment. It felt empowering.”

The two knew plenty of peers who were leaving the city, and they were tracking the nose-diving rental prices online. “You could see how far things were dropping on StreetEasy,” Ms. Landry said. “I knew that most apartments were going down by $500 or $600.”

She looked up some of the empty units she had spied out her window and saw that many had floor plans like hers. Knowing the management company had so many similar empty apartments felt like an extra piece of leverage.

With the loss of a roommate, Ms. Landry and Ms. Schulman had lost $1,200 toward the $3,350 rent. So Ms. Landry called the management company to explain that they could start paying $200 more to make up a bit of the difference, but that they would need a $1,000 reduction.

“I don’t think we were asking for anything insane,” she said. “Besides, we’re always asked for insane things by landlords in other, normal times. It was the first time I had power in a real estate negotiation in my life. It felt very righteous.”

The management company’s counteroffer was disappointing: a $67 reduction.

Both women work in Manhattan, but neither wanted to live there. They had already tried that, and it wasn’t for them. They felt at home in Williamsburg, attached to McCarren Park and the proximity to the L train. So they kept their search local.

They began looking with three months left on their lease, which meant they weren’t in a rush — yet another piece of leverage. As they hopped from one apartment viewing to next, the management company continued reaching out with phone calls and emails, each time offering another increase on the initial offer of a $67 reduction, but never getting close enough to $1,000 to convince Ms. Landry and Ms. Schulman to call off the search.

Eventually they came across a two-bedroom on Manhattan Avenue, a few blocks from where they were living. “We saw this place and knew right away,” Ms. Landry said. The streetscape was more residential and quieter, and the apartment had more shared space, something they wanted. “Our giant living room is definitely by far the best.”

Seasonal Cycles: During the summer, Ms. Landry and Ms. Schulman spend time outside; McCarren Park and Far Rockaway are favorite destinations. “In the winter, we’re a bit more static,” Ms. Schulman said. “I try to block it out,” Ms. Landry said.

On the day they found the apartment, the management company of their old place made one more call, finally offering the $1,000 rent reduction that Ms. Landry had originally requested. But she and Ms. Schulman had fallen in love with the new place, they had put in the work to find it, and they decided to stick with it.

At the lease signing, their decision was rewarded with a surprising discovery. As they read through the fine print, Ms. Landry leaned over to her friend and whispered: “I think this is rent stabilized.”

After leaving the signing, they continued deciphering the legal language, trying to determine with certainty if the unit was, in fact, rent stabilized. Ms. Landry requested a rental history for the apartment, studying its classification, the legal limits on the rent they could be charged and the rent paid by previous tenants.

“It’s a bit embarrassing to admit,” she said, “but I found out on TikTok that I could request the rental history.”

She did confirm that the apartment is part of the rent-stabilization program, but Ms. Schulman remained skeptical until recently. “I don’t think I actually believed it until we got our lease renewal in the mail,” Ms. Schulman said.

They signed the renewal just before the holidays, and their regulated apartment has saved them from a rental market that has now soared back to prepandemic levels. Steep discounts are no longer the order of the day, but Ms. Landry and Ms. Schulman are able to stay in their apartment for another year, in large part, because their rent will increase only by $36 — and that won’t kick in until after an initial six-month freeze on rent increases, implemented for rent-stabilized apartments by the Rent Guidelines Board in June 2021.

Ms. Landry’s partner started looking for his own new apartment shortly after she and Ms. Schulman found their place. “I told him to start asking if they’re rent stabilized,” she said. “It pays to be empowered with all the information. And tools. Even TikTok.”